Sometimes I think to myself: You know what would make sacred pilgrimages much better? If there was a handy-dandy guide to each holy location and the appropriate donations!. Now you too can experience the quick-and-easy version of the Tribunal’s holy trials!

Getting Ready for Your Pilgrimage 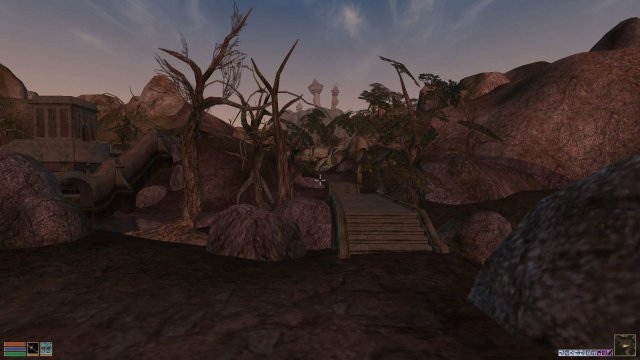 Begin your journey by leaving Balmora via this road.

Speak to any questgiver of the Tribunal Temple, or just read The Pilgrim’s Path anywhere in the game. This quest is necessary for the Tribunal Temple questline; if you’re not in this faction, you’ll get the quest anyway by reading this book, which you’ll probably do by accident whilst combing somebody’s library for skillbooks. I’ve found starting in Balmora is best for this quest. If you want to avoid grabbing all the individual donations as you go along, nip it in the bud and buy muck and potions of Cure Common Disease and Rising Force from Nalcarya of White Haven; a Common Soul Gem from Galbedir at the Guild of Mages; and dreugh wax from Somutis Vunnis at Moonmoth Legion Fort on the way out of the city. As long as you’ve got 100 gold on you after these purchases, you’ll be set to complete the whole pilgrimage without having to stop to restock.

Fields of Kummu: The Grace of Humility 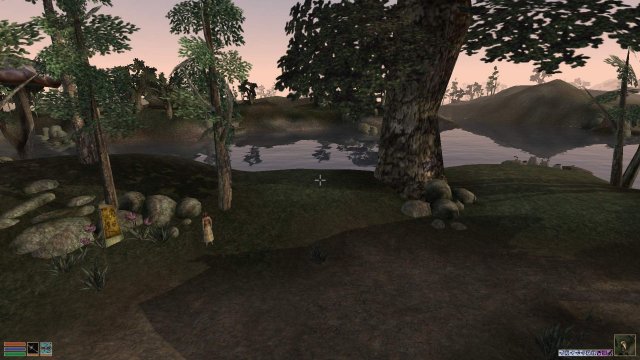 Leave Balmora via the west gate and follow the path past Moonmoth Legion Fort. Turn right when you enter the foyada and take the following left. Another left should have you walking parallel to Lake Amaya to the north. The Shrine of Humility itself is at the Fields of Kummu, which will be slightly off the road on your right. If you didn’t bring any muck, swim southwest of the shrine to a small island in the lake where you can harvest it from mucksponges (the big tubes with an opening on top to the lower right of the image above). Offer your succulent new muck at the shrine and you’ll be blessed with a 100-point reduction in encumbrance for 48 minutes, allowing you to carry more. This blessing can be useful for lugging loot around to different vendors and will be granted any time you offer muck at the shrine.

Palace of Vivec: Grace of Generosity 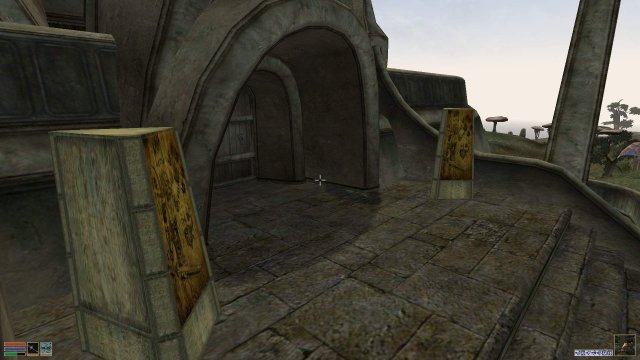 The shrines at the entrance to the Palace of Vivec.

Continue along the road to Vivec City and walk to the Temple Canton (alternately, toss a gondolier a few coins to take you there). Walk south and up the stairs to the entrance to the Palace of Vivec, where you’ll find the Shrine of Generosity outside the door. Donate 100 gold at either of the two shrines to receive 10 points added to your mercantile and luck skills for 48 minutes. 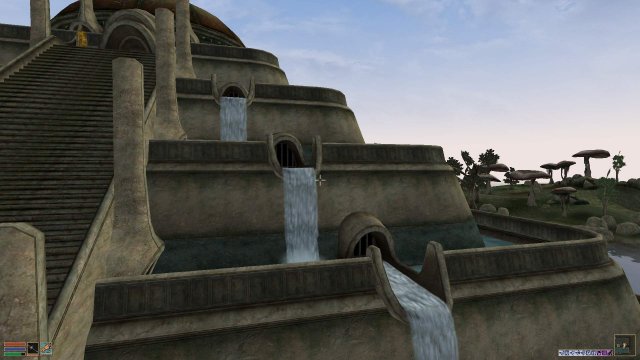 Entrances to the Puzzle Canal on the north side of the Palace. 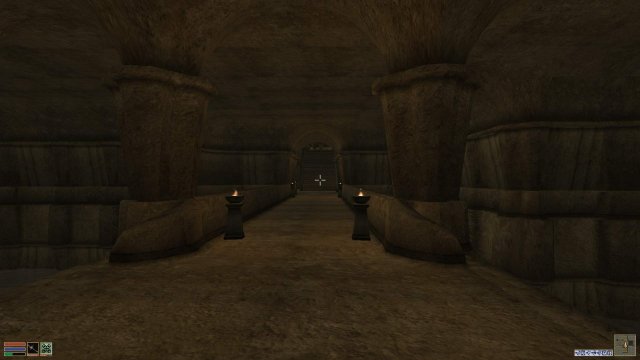 The bridge that will appear after you drown yourself.

Once on level 3 of the canal, head to the centre of the chamber and enter ‘Puzzle Canal, Centre’. Read the message on the shrine and enter the water. Stay underwater until your breath bar is empty and let yourself take damage until your health drops below 10. You’ll black out and immediately wake up healed. Get out of the water and cross the bridge that has newly appeared. Talk to the non-hostile (but very sassy) Dremora Krazzt and give him a silver longsword from the chest nearby. Activate the real shrine (to Krazzt’s left) and be blessed with a 25-point water breathing and swift swim blessing for 48 minutes, allowing you to breathe underwater and swim quickly. 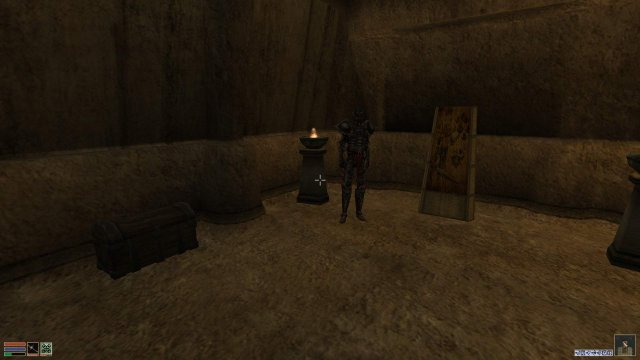 The Dremora Krazzt and the chest of silver longswords. 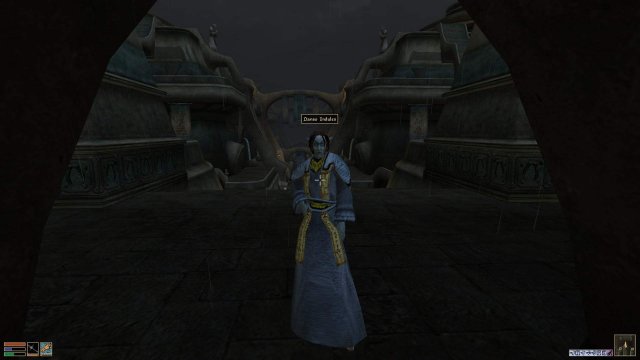 Danso Indules (looking fabulous), who will sell you a Rising Force Potion.

Leave the canal and find the dunmer Danso Indules (pictured) outside the High Fane on the Temple Canton. Purchase a Rising Force Potion of any quality (potions you’ve made yourself just won’t do) from him and offer it at the shrine, which is on the southwest corner of the Canton (also pictured). You’ll be blessed with 100 points of levitation for 24 minutes. This one is best done after the other Vivec graces since the levitation is useful for travelling to Ghostgate and Koal Cave in the next few pilgrimages. 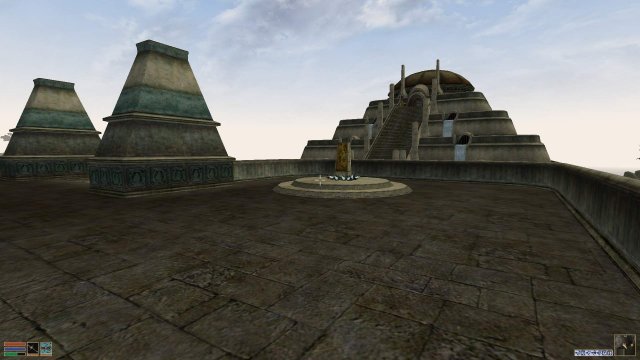 The shrine on the southwest corner of Vivec’s Temple Canton. If you can’t find it, note that it’s one level up from the level with the gondolier. 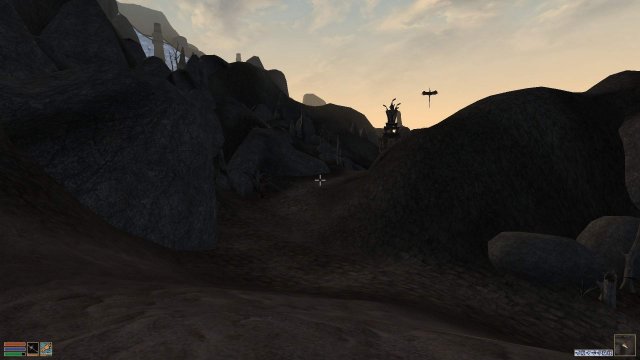 This concludes your business in Vivec. If you don’t have a soul gem that you’re willing to lose, duck over to the Telvanni Canton and buy one from Audenian Valius or Garas Seloth in the Waistworks. Once you’ve bought the gem, fly north of Vivec to the silt strider and buy passage to Balmora, then Ald’ruhn (if you’re in the Guild of Mages, the guild guide in the basement of Balmora’s guild will get you to Ald’ruhn for slightly cheaper, plus you’ll have more time left on your levitation). From here, if you’re still flying, fly due east until you see the big magical fence, then follow it southeast until you reach the Ghostgate. Alternately, take the road pictured above from Ald’ruhn’s southern gate. When you reach a fork in the road, head north, avoiding the path that leads to a giant Daedric ruin. 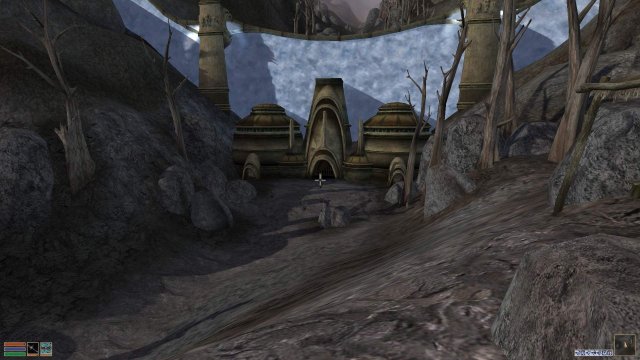 Ghostgate is the only gap in the Ghostfence and will be marked on your map if you’ve read The Pilgrim’s Path or been given the quest from a Tribunal questgiver. In front of the gate, activate the switch outside the fence to open the outer portcullis and the one inside the gate to open the inner portcullis. Walk north until you see a path northeast, then follow that. While inside the Ghostfence, keep an eye out for corprus creatures and blighted cliff racers: avoid them if you can. You’ll find the Shrine of Pride at the end of the path but be careful when carrying more than just the soul gem you want to donate – the shrine will take one of every quality of soul gem that you have, so drop anything you want to keep when activating it. Donating the gem will give you 50 extra magicka and 25 points of shields for 48 minutes. 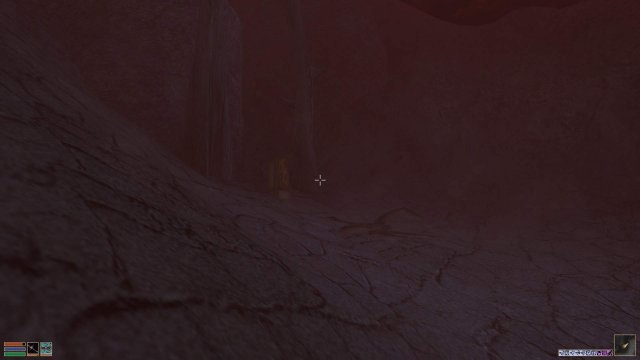 Ghostgate shrine, including visibility and one of many cliff racers killed during the journey. 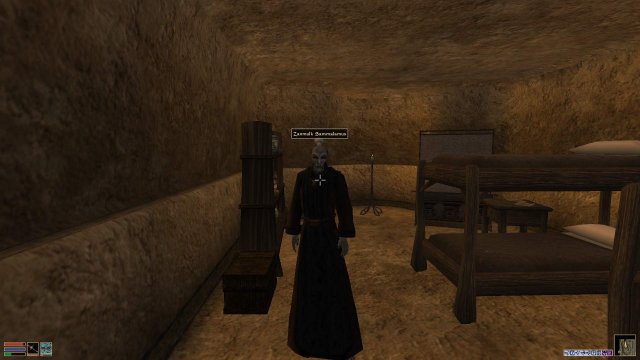 Zanmulk Sammalamus, who will sell you a Potion of Cure Common Disease if you forgot to bring one.

Walk, fly, or use a scroll of Almsivi intervention to return to Ald’ruhn and buy passage to Gnisis on the silt strider. Walk to the Gnisis Tribunal Temple and buy a Potion of Cure Common Disease from Zanmulk Sammalamus inside the temple, near the entrance. Proceed up the stairs to the top floor. Offer the potion, then touch the middle panel again to reveal the Mask of Vivec. Touch the mask (the Ordinator won’t mind) to be taught Vivec’s Touch, a spell with 100% chance to Cure Common Disease and Blight Disease on contact. Vivec’s Touch is mostly useful for an Imperial Legion quest also in Gnisis, so if you’ve been meaning to join up, now is an excellent time. 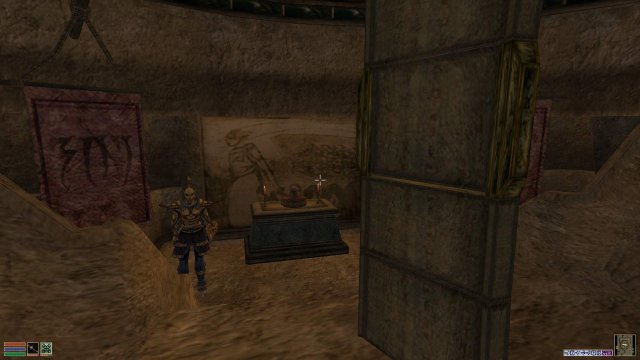 The Shrine of Justice in the centre of the room and the Mask of Vivec on the altar, being guarded by a vigilant Ordinator who will even let you touch it. 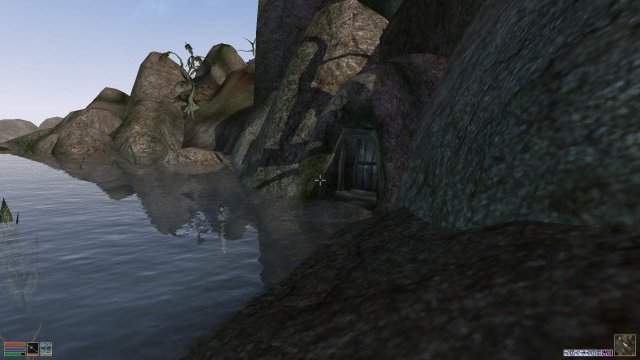 Koal Cave’s entrance (complete with pilgrim taking a dip). Take a left turn at a fork in the road near Gnisis on the road from Ald’ruhn.

If you’re a low level, not up for a fight, or just didn’t buy it at Moonmoth Legion Fort, buy dreugh wax from either Zanmulk or Mehra in the Gnisis temple. Leave the temple and follow the road south to Koal Cave (or levitate due south if the enchantment is still going). Enter the cave and offer the Dreugh Wax at the Shrine of Valour immediately inside. If you decided to fight, swim into the cave and kill the Dreugh Warlord in the water to the west. Harvest the wax and offer it at the shrine. You’ll receive a 10-point buff to your unarmoured, light armour, medium armour, and heavy armour skills for 48 minutes. If you’ve killed the Warlord, you’ll also get a Dreugh Cuirass, a decent piece of medium armour. After killing the Dreugh Warlord, donating any piece of dreugh wax will give you an indefinite amount of dreugh cuirasses in case you’re interested in cheesing the game for endless money, a reward all religious pilgrims should be entitled to.

Turning in the Quest 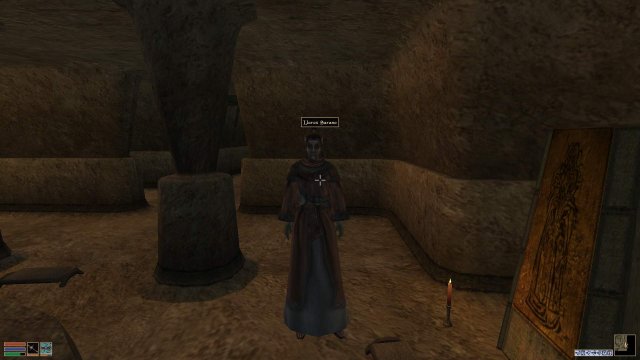 You did it! If these pilgrimages seemed like they weren’t that gruelling and didn’t draw out the piety from your godless self, remember that not everyone got to have a handy guide like you did. Speak to any Tribunal Temple questgiver to mark the quest as completed.

The Elder Scrolls III: Morrowind – How to Make a Lot Gold with Any Character (New / End Game)

This trick helps you get upwards of 200K gold at any time in the game, so long as your previous actions never altered any means significant enough to ruin the […]