This guide presents you the most important non-trivial aspects of Undead Legions 2.

Jumping is one of the most crucial elements that you will have to master in Undead Legions II. If you don’t time your jumps well, chances are that you will often get overrun in situations where you could escape certain death and gain a significant advantage. You cannot jump at will, because you need Endurance for jumping. Every character starts with three endurance bars and each jump costs one bar. The endurance bars are located just over your health bar. If all bars are used up, you cannot jump until at least one bar has regenerated:

The great thing about jumping is that next to making it easy to escape when being cornered, enemies keep walking in the same direction for a short time which gives you extra space and time for positioning yourself. Also, you can increase the range of your jumps by holding the jump button while jumping. Last but not least, there are items that give you extra endurance bars and that increase your jump range.

In the campaign mode, you need to unlock additional characters to be able to play in local co-op. You’ll unlock the Rogue when completing Level 3 already, which shouldn’t take more than a couple of minutes. If it does take longer, consider playing on a lower difficulty setting. The Mage will be unlocked shortly after the Rogue and the Priestess will be unlocked when at least one character is Level 5 and Oggharr, the first boss is defeated. 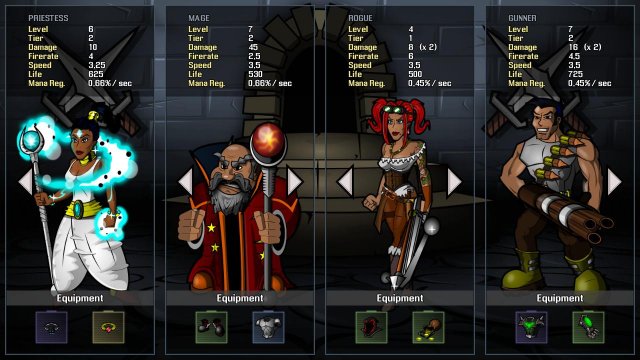 You won’t find any items before finishing the second level in the Ice World which grants you a Tier badge reward and unlocks the Item Forge. From then on you can get blueprints for new items in Tier 2 and higher levels by shooting Treasure Goblins that occasionally appear during a battle. The probability that a Treasure Goblin appears depends on the difficulty setting. Higher difficulties have higher chances of Treasure Goblins to appear.

Replaying levels is highly recommended when you find that your characters or support spheres are not strong enough. Of course, you can always choose to decrease the difficulty level, but this will make you earn less money and decrease chances of Treasure Goblins to appear. Instead, you might want to play earlier levels in a higher difficulty level. That way, your heroes can gain Xp more easily while encountering more Treasure Goblins and while finding more gold. 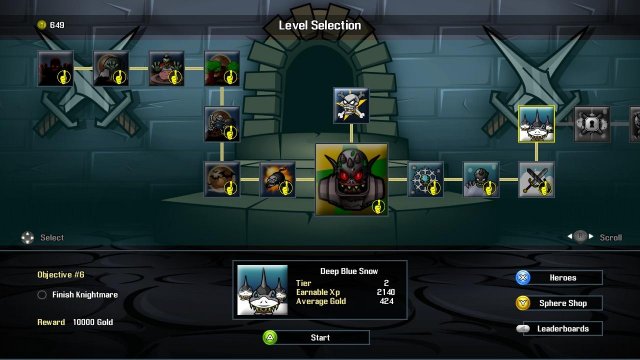 The difference between these types of spheres is huge and each type of sphere requires an appropriate playing style. Fortress spheres are the most powerful when you can manage to stay inside them most of the time during a battle. Destructive sphere force you to primarily roam the battlefield for bombs and starfire pick-ups while they also provide you with healing orbs that give you a short life regeneration boost. Supportive Spheres are larger than the other spheres and provide powerful hero buffs that you have to collect all over the playfield while on the other hand, it is preferable to reside inside the sphere to constantly receive healing.

Which sphere works best depends not only on your playing style but also on the type of enemies that appear during a level.