Just a collection of the various generic sets that I’ve been making use of in game, created more as a guideline than anything else. They’ve been very useful to me, so perhaps they can be useful to you too! 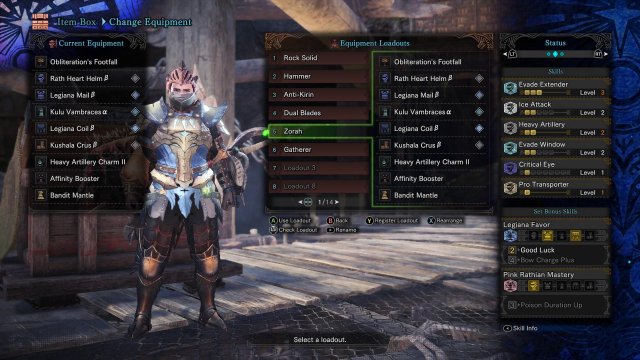 The Zorah Magdaros set is primarily built around farming the mission “Left Quite The Impression” with the intent of making the process smoother and easier. It focuses largely around easing the use of cannons plus increasing their effiicency, while also increasing the chance of receiving better rewards from the end of quest loot table.

With this set up, you can carry cannonballs faster between the store box and the cannon, plus you can dodge roll faster and further with them which is even faster than running, while doing an extra 20% damage with cannons – making a fully loaded cannon essentially fire six shots instead of five, damage-wise.

You’ll also trigger the first half of Legiana’s Favour armour bonus “Good Luck” for increased quest rewards – but only as the host, which is fine because it’s usually more efficient to solo this quest when it comes up anyway, as Zorah Magdaros has much less resistance and health – it typically only takes about six to seven full cannon loads to end the mission in solo play.

You do not need any combat skills at all – this mission is one large interactive cutscene. When Nergigante shows up, Zorah Magdaros will throw magma balls at him until he leaves without any player intervention. Only the Barnos pose any threat, and they are very easy to ignore.

As far as your decoration slots go, you have free reign. If you have them though, I’d recommend slotting in three Geology Jewels, to make all of the mining resources contain four items instead of three, which adds up considering the vast amount of mining deposits located on Zorah Magdaros’ back – especially since you can sometimes grab Zorah Magdaros Carapaces from them too.

Otherwise, a few Intimidator Jewels don’t go amiss either, since they’ll keep the potentially extremely annoying Barnos enemies from attacking you, for the most part. 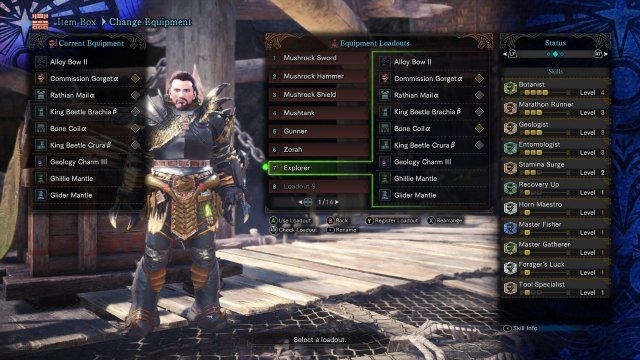 This is a late game Gathering set designed largely to cover most of the Gathering / Endemic Life Hunting / Fishing basics. It pretty much contains all the necessary skills save a few (such as Honey Hunter) that you’ll need to keep going in an Expedition session when trying to find Endemic life or otherwise collecting some materials. It’s rather high end, but also a lot of the end game pieces can also easily be replaced with other things, if you need to.

With this set you are prepped and ready for gathering crafting materials, catching fish, capturing Endemic life and hunting and killing insects and small monsters. There really isn’t much to a Gathering / Explorer type set, honestly. With the skills provided you’ll be able to gather an extra time from resource spots, gain double forages from plantlife, catch fish easier, and rare resources will show up more often. You’ll also be able to kill insects without ever exploding their bodies making collecting their resources easier as well.

You have a bit of Tool Specialist, which can help you using your Mantles more often, although it’s largely just a bonus skill that is only there because it was there more than anything.

The weapon choice is largely up to you, but I chose a ranged weapon (in this case, the bow) in order to easily kill Vespoids and Wingdrakes etc, and for a bit of healing here and there when required. It is fully augmented with Health Regen (for healing) and Slot Upgrade x 2, which added an additional Size 2 Decoration slot to my loadout. It’s not 100% necessary, I suppose, but it’s what I wanted for more quality of life.

Lastly, you’ve got enhanced Stamina recovery / regeneration as well as greatly reduced Stamina consumption while sprinting around and jumping up climbable ivy – assuming you have access to the decorations for it (for some reason, Sprinter Jewels are Rarity 8.) If you don’t have access to those gems, feel free to slot in something else in its place instead, there’s plenty of other skills that could be useful, such as Stealth or Intimidator.

Guide on how to obtain all 3-paw photos for the Lynian Researcher, as well as examples on how they could look. ContentsAll Palico Photos (Lynian Researcher Requests)BasicsVideo Guide1 – 4 […]

Monster Hunter: World – What to Do when Behemoth Hit You

Fighting a behemoth need teamwork, but more importantly you must survive his combos. Other MHW Guides: Achievements and Trophies. All Camp Locations. All Palico Gadget Locations. Elder Dragon Investigations. Where […]