An unconventional approach to restoring the Byzantine empire to its former glory. This is 100% ironman capable.

Opening moves (With a Twist)

So many of you who are reading this are now wondering “Gee, what is he even trying to say?”. Its time to sell your soul and make a deal with the devil, because for this to work you need to start ironman not as Byzantium, but as the Ottomans.

Your Opening moves as the Ottomans are pretty straight forward, you can either take the time to fabricate a claim on Byzantium, or just do a no CB war against them. The goal here is to annex them completely as well as Athens. AE is totally irrelevent here, so go nuts. In all my tries of this, the Byzantines allied Serbia, but you can pretty much ignore them.

With Byzantium annexed, dont waste any time or admin points on coring, and do not take the decision to make Constantinople your capital. Instead, move your capital to somewhere in Anatolia. From here if you really want, you can totally ruin the Ottoman economy by maxing out your loans and spending all the money, as well dispanding all their forts, but its not really required. 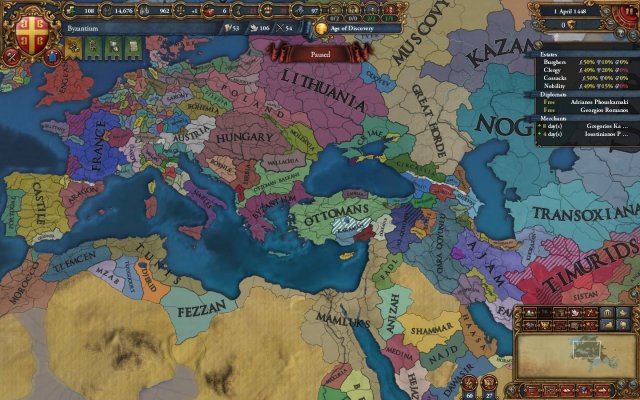 Its now time to release Byzanium and switch over to them. If you did all of this quick enough its easily accomplished before 1450. Congradulations, you now have ALL starting Byzantine cores, and have split the Ottomans in half in only a few years.

So you are now free, what now? Right now you have several immediate issues:

You have no army

You are going to have to build up an army, and thats going to take time, manpower and money. As a vassal your forcelimit should be around 14. Focus on reaching your forcelimit before building boats.

You have no navy

The same as before, however it should be much easier to find the sailors to toss in those galleys, thanks to the fact all but one of your new provinces is a coastal province with decent development. Once your army is built you should focus on building solely galleys, and in no time at all you will have more than the Ottomans, meaning you have naval superiority and can block that straight.

You have lost empire rank

Yes, this is the biggest drawback to playing as Byzantium this way. Starting as a lowely duchy, you only have 2 diplomates, so this will make getting allies a bit of a pain, and the smaller Orthodox nations around you dont really want to be your vassals anymore (Such as Theodoro) do to the difference in government rank. The plus side is that you can get to kingdom rank at a reasonably quick pace after the Ottomans are gone.

In your years under Ottoman protection, you should focus on building your galley fleet, building your army and making friends with Poland, Hungary and Austria. They are usually all Ottoman rivals and should be happy to help you once their truce is up. From there you need to wait for the right moment, and when their army is preferably on the other side of the crossing. 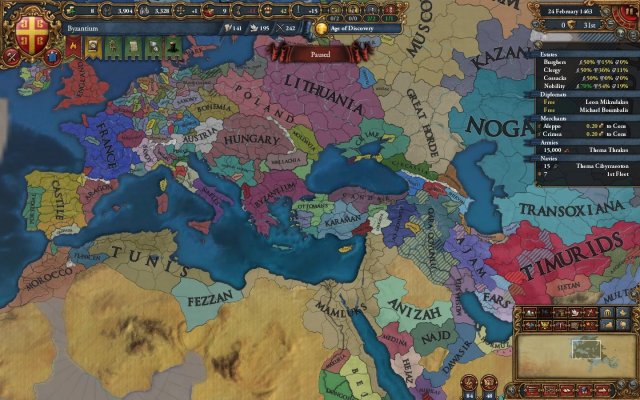 Thankfully, in most cases the Ottomans will rush into war with Albania, Venice and friends. Your truce should almost be up with the Ottomans now as well, so now it is time to strike. Let the war go on for a bit, so the Venetian fleet does your dirty work for you, and the Ottomans bleed manpower. In my game, I manage to get the support of Austria, Hungary, Wallachia and Poland.

During the war, take as much land as possible, but focus on the European orthodox lands as you should avoid the Sunni provinces until you get religious ideas.

Now you a free, the sky is the limit.

I am now a free and strong Byzantium, now what?

From here you should just follow the standard Byzantium path of retaking Anatolia, and fighting the Mamluks for control of the holyland. If you are lost at what to do, the new mission trees for people who have the Purple Phoenix pretty much hold your hand the whole way through, complete with great rewards and special events for sacking Venice and restoring the pentarchy. 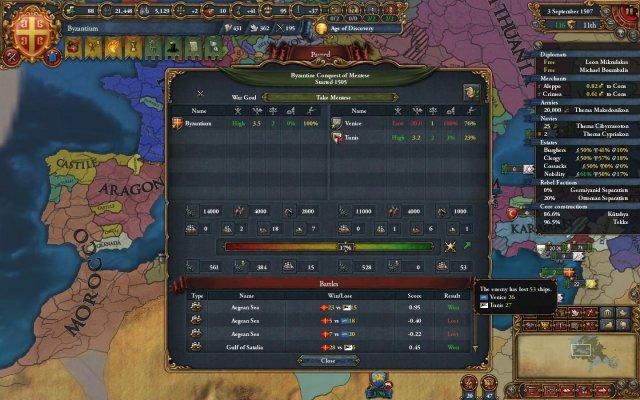 Focusing on getting the Greek lands back is always a good idea and a war against Venice should be easy enough as long as you have maintained your galley fleet. Sometimes Byzantine separatists will pop up in foreign controlled lands, which netted me Corfu, and Rhodes. If you are having trouble with the Venetian navy, take the naval doctrine that gives the %15 galley combat ability increase. 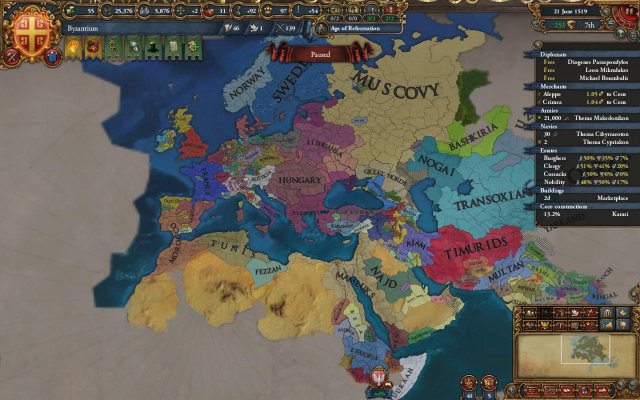 You need either religous ideas or humanist as one of your first ideas, so pick one of them and then pick which ever military idea fits your needs. You can’t go wrong with defensive and quanity; lots of cheap troops with high morale is always helpful. Karaman and Candar ate up the rest of the Ottomans in my game, and one of them allied the Mamluks, so be mindful of AE and who is allied to the Mamluks, as they are now your endgame boss, not the Ottomans. Pick an Orthodox nation in the Caucasus. I allied Imereti and got a PU over them. 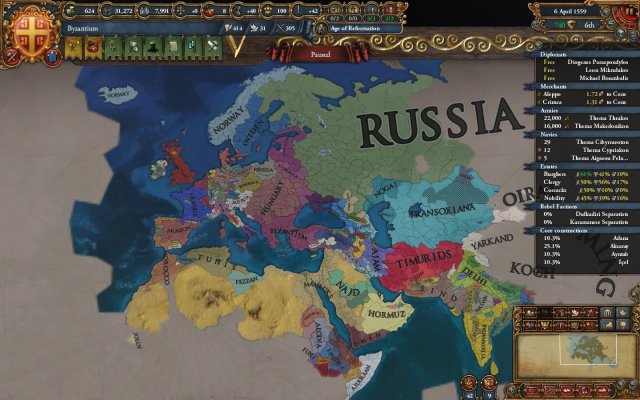 Soon enough Russia is going to come banging on your door. Thankfully they will jump for joy to ally a fellow strong Orthodox nation, so do that as soon as you can, and either control the black sea coast directly, or through vassals.

Its generally best in my opion to leave Europe alone for a bit, and then when the league war happens either get involved or dont, and eat up whoever you can while their pants are down. Obviously do not attack Genoa until the shadow kingdom event fires.

Europa Universalis IV – How to Get the Home and Away Achievement

In this guide I describe to you how to obtain the achievement “Azur de semé lis or”: Get all the french cores as France. How to Obtain the [Azur De […]