This guide explains one of the easier methods of completing the game with Randomized (not really) squad, any number of islands on Hard mode for gold medals.

Since getting all gold medals with Randomized squad is probably one of the hardest feats in the game, we need to tip the scales in our favour a little bit. And by that i mean we need to tip them by a lot. However we are not going to use any game file editing or cheezy console commands, we are going to get those medals fair and square using simple logic, simple math and simple tactics.

Obviously some squad compositions are stronger than the others. For example runing 3 prime mechs killing aliens left and right on Easy or even Normal difficulty. But on Hard difficulty that has much lower chance of success, simply because on Hard mode you are outnumbered by enemies that have much more combined health than your combined damage. So in order to beat the game you need not only clever use of squad synergies but also a good portion of luck. Ironically luck-wise it is even harder with Randomized squad due to the fact that way more often than not you get a very poor squad comp with weird abilities that is not able to beat even Easy mode. And that alone is the biggest problem which we need to solve here.

I will explain the method using probably one of the most overpowered squad compositions, but you can adjust it to fit any mech comp + pilot that you feel the strongest. General idea is the same – you need to minimize the number of avaliable squads to maximize the odds of getting mechs that you want. And yes, unfortunately it requires a fresh profile, there is no other way around if you want it done easy. In fact if you have a goal to complete all gold medals with all squads and get every single achievement in the game you must get Randomized squad out of the way first, before you unlock more squads and thin out your odds of getting desired mechs randomly. Here is quick preparation list you need to do before we get to the strategy part of the guide.

Step 1 – Create new profile.
Step 2 – Play around with Rift Walkers squad to get 6 coins.
Step 3 – Unlock Frozen Titans squad. Do not unlock any other squads.
Step 4 – Play some more with those two squads until you unlock pilots: Bethany Jones or Mafan.
Step 5 – Level up your pilot to max level and get +1 Reactor +1 Movement. Repeat step until you meet the needed skills.

Mafan is ideal for this strategy but he is one of the three hidden pilots so might be tricky to aquire, however Bethany Jones a common pilot will do, just not as versatile as Mafan. 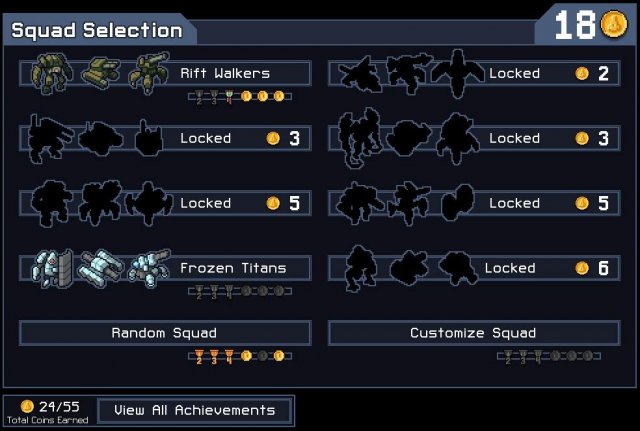 Moving on to the strategy. You can now choose Random squad option and click Chaos roll a few times. You are looking for this mech composition: 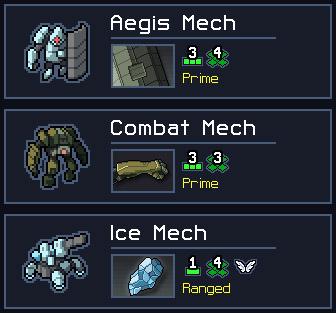 Math time! There is a 1/36 probability of getting this particular mech comp (order doesnt matter) if you got just two squads unlocked. So basically it will take you roughly 36 clicks to get it over and over again, which is not really random any more, right?

The biggest star in this squad is Ice Mech piloted by a shielded pilot. Thats why you want Mafan or Bethany piloting it. The trick is – you are not getting yourself frozen as long as you have a shield, so you can shoot the Cryo Launcher every turn and dont need no help unfreezing yourself. It disables any enemy unit including bosses regardless of their HP. But not only that, it allows to freeze your own units and buildings, giving them an icy “shild” preventing all damage. Its a flying unit, with all its mobility benefits. And if thats not enough, if it is piloted by Mafan you can also permanently block Vek spawn without taking any damage and still be able to shoot every turn. And even more, it does not requre any weapon upgrades, allowing you to save all reactor cores for other mechs. That one extra reactor from a pilot goes into another +1 movement, and that is all you need. All of this makes this mech the single most OP thing in the game.

To best complement the Icy Mech you want a couple of tanky primes. Aegis Mech from the same squad is one of the best primes to go with. It has fair damage to begin with, it gets shield after every attack if upgraded, following by +1 damage. All upgrades are rather cheap on this mech. And it has a unique ability to flip the attack of the enemy, which can be used defensively to prevent damage or offensively to cause one alien kill another. As far as pilots go, during your game you may encounter a couple that will make this mech even better. You are looking for either Archimedes or Chen Rong, basically you want this mech to be able to move after attack, so that he can use his shield to block some distant Vek spawn for free, or body block an alien shot for free. Best pilot skills are the same +1 reactor +1 mobility for all mechs in this strategy.

And lastly since we are lacking damage and some kind of push mechanic here, its best to go with a good old Combat Mech from Rift Walkers squad. He is packing a mean punch, can be very mobile with his charge, and dishes out up to 5 damage on a single target if bumped into something. He is basically going to be our hard hitter and pusher. And he’s tanky enough to take a hit or two early on. Pilots-wise anything goes, i tried different pilots with this mech and most of them work well, giving it some kind of extra edge. Its just all around solid mech, cant go wrong with it.

And thats about it, first two islands Hard mode is a joke for this composition, third island is no problem, and even forth island should not give you too many trouble once you get down the synergies of the squad.

Additionally this composition allows you to override certain scenario mechanics, which normally are a lot of pain for other mech comps on Hard mode.

As far as bosses go, the Jelly boss and the Spider Queen boss are probably unkillable by this composition on Hard mode. I mean you just freeze them and never touch tnem, so you actually pass the mission but fail the boss-kill objective. Other bosses you kill easily.

Into the Breach – Squad Tier Rank

The squads in Into the Breach can be considered as the second layer of difficulty. A high tier squad can solve threats and finish combat without a scratch without perfect […]

Into the Breach – How to Obtain Untouchable Achievement

Into the Breach – How to Unlock All Squads and Pilots (Cheat)

There are two methods how to unlock all squads and pilots in Into the Breach. Method #1 Browse to: UsersUserNameDocumentsMy GamesInto The Breach. Open the folder labeled with your profile […]