This is a guide to explain simple mechanics to allow new players an easier first experience, and then learn by themselves to master the game.

The aim of this guide is to help people to get into this game without having too much trouble. I, in the beggining (although it was early access, so probably there was also some miss balancing), got destroyed and had little to no info to how to play this game and this was frustrating.

I’m going to give you some pieces of advice according to my experience with the game, but this means in no case that it is some “perfect build” thing, if such thing exists. The aim is just for you to do a nice first run (by telling you what worked for me) to discover by yourself how do you want to play next. Don’t worry you’ll find the ultimate combos ! (Quick strike + maintain I see what you did there).

I think this game is really cool and I would not like people to be thrown away by it’s first difficulty, because it deserves attention.

This is an incredible game because you have exploration, deck building, strategic fight, talent choosing, etc. Do not overlook one of these aspects.

Special words you don’t know: there’s a codex in the menu you can refer to in game when you don’t know this stagger word the ennemy just inflicted to your crew. 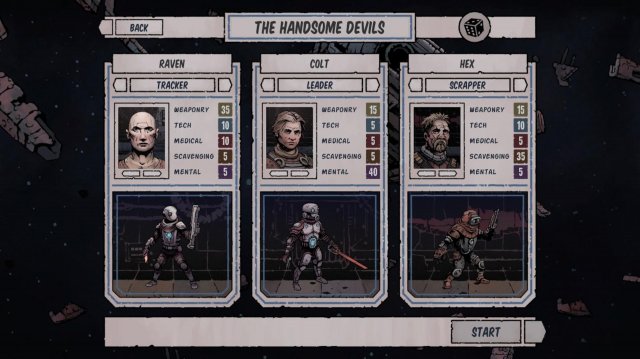 First of all, name your characters, give them portraits you like, so you’re deeper into the adventure!

Okay there are lots of classes and perks, what to choose?! Well let me clarify this.

Here are the classes and how a beginner team can be built:

What you want to beggin in this game is one defensive support (Tech/medic), one controller and money earner (Leader/scrapper) and finally a dmg dealer (Tracker/bruiser).

For the following chapter we are going to use an example:

The perks can be chosen depending on what you prefer, but first i’ll suggest recycle on everyone, as it’s always nice to have card advantage (or evasion for sustain). 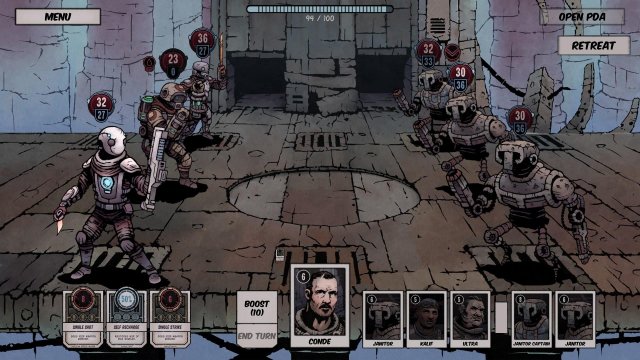 Okay so I’ll be using our example to talk about this because there are so many options.

So here are some things I found out:

Generally I think it is better to specialize your team so everyone has a role and you always have the cards you need in hand.

Let’s with our team tracker + medic + scrapper how it goes:

TRACKER: will do heavy single target dmg, both ranged and melee.

SCRAPPER: will throw bombs at groups with little HP and otherwise set traps which will stun and interrupt the ennemy. He will also have recycle boosting cards for his team. Do not think he is useless because he does less dmg, he is the one bringing you tons of loot.

MEDIC: will buff the tracker (or the scrapper if it’s a group of ennemy) and stay in invisibility.

Choose wisely your class cards and do not hesitate to deactivate the ones you don’t like (for instance mark target on your tracker if you feel it’s a loss of tempo).

You also have, at level 4, a second class to choose. I suggest choosing something related to your main stat (i.e. tinker for scrapper because both use scavenging stat). You won’t need everything, but even 1 or 2 excellent perks for your build are enough to choose this specialization.

Obviously if you use a Bruise, because the bruiser cannot be the only dmg dealer as he is only melee, so you would have to use a scrapper and his bombs for instance (which rely on scavenging skill to get boosted instead of weaponry, so it’s fine).

Okay I hope I was clear enough for you to understand the point.
I know this is not a perfect recipe or an ultimate build, but I wish it helped you and made you understand a little bit of the game so you can get into it more easily.

A quick list of a few things you can use to break the game to your advantage. Tips and Tricks to Beat the Game Break Randomness To break a game […]