I don’t have much in terms of jewels and crafted gear sets.
However, i wanted to take part in the deviljho event. The defence alone let me down, more or less everything i tried out from my crafted sellection made the battle eel borderline impossible to me, the battles where either too challening or risky to feel the need to repeat over and over.

After messing around with some gear, a bit of farming to feed new ideas that, at the time. Might or might not have gone too well, i then came up with a set that suprisingly works and with careful gameplay. And monitoring his move sets, the setup i provide today is what i consider minimal. (hard. but not borderline impossible.)

This setup works best solo, but has a pretty decent survival value even in a group. If utilized properly. (Not dying while others fall constantly, battle after battle is considered to me, decent survival.)

Anyway, try it out or if you are short on the materials, try to get close to what i have and see how you do, there are better setups out there but again. I don’t have a lot and this may give others who don’t have much either and feel under powered at thier current tage in game, to try and achieve something close to what i have or experiment with gear like i did to get something they are comfortable with. that works in thier favor and against old pickle.

Be gentle with the feedback i am only trying to help, if this is useless information. You have my deepest apologies.
I have only died once win a group, with this setup, not sure if it is the gear itself or skill.

Solo battles with this takes me no more than 35 minutes, bit slow but this is all i have against him right now.
I have dislexia so you may have to read twice on some parts but i have done my best to be clear and expand on areas of intrest. 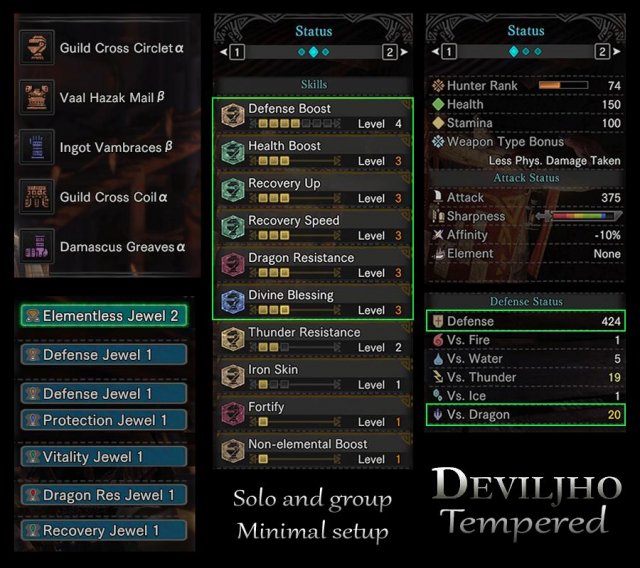 Adding 3 in Dragon Resistance, not only gives +20 resistance but also adds 10+ to defence.
Adding 4 in Defence Boost, adds 20+ plus an additional 3+ in all Elementals.
This should hit you up at around 400 Defence, if you have upgraded gear.

Devine Blessing procs quite a lot so i decided to make this a priority in my set, reducing damage by 50% when it does proc.

Recovery Up is on 3 and is there to conserve my mega potion supply, and buff the normal potion strength.

Health boost is on 3 this helps a lot, bringing your HP to 150. rounding your max in battle HP to 200 after popping a Max Potion.

Recovery Speed is on 3, decided to add this to the mix when i noticed how many times he hits you leaving a large chunk of red HP.

Palico can be used for tanking or buffing. I tried both and they are both good for this build.
I prefer the buffs tbh.

pleae note that i did try a vaal recovery setup but too much negativity went into dragon and even though i solo’d him was the hardest battle i ever did.

Still needed the vaal mail though because i only have 1 recovery jewel and no slots left.

Guide on how to obtain all 3-paw photos for the Lynian Researcher, as well as examples on how they could look. ContentsAll Palico Photos (Lynian Researcher Requests)BasicsVideo Guide1 – 4 […]

Monster Hunter: World has 15 Camp Locations. Camps are used as fast travel points. Each map has 2-4 campsites. About half of them are unmissable story unlocks, the other half […]

Monster Hunter: World – How to Get the Sinister Cloth (Death Stench Armor Set)

I will not write a lot of unnecessary words and immediately get down to business! Other MHW Guides: Achievements and Trophies. All Camp Locations. All Palico Gadget Locations. Armor Skills […]