In this manual, in combination with my first one, I want to tell you how to pass the challenge from the new DLC under the title “Glazier’s Holiday”. The purpose of the challange is to prevent the destruction of any of the barricades in the lair at the level of “Pit” on the complexity of “Legend”.
At first, like many probably, I considered this challenge to be an impossible and complete delirium, since if you passed this map on a legend, you could notice that the enemies are getting nemeric. But having gathered with the team, having spent a couple of test attempts, after having tried several tactics, we all managed to pass this challenge and get the cherished cosmetic chest. Below I’ll tell you how we went, I’ll give you a layout of the room with the desired arrangement of characters and with explanations which classes in which setup should be used. Another important remark, without more or less played or understanding each other’s team, you do not perform this challenge. And now to business.

Now let’s proceed to the layout. 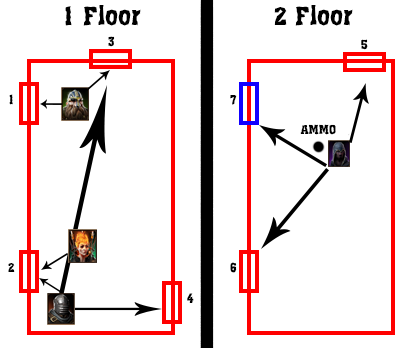 Magician: The pyromancer takes on the most complicated window at number 2, it’s only he who does not get distracted by anything. Use the staff of the fireball and the ultimate, the purple can be a good help.

Victor: The hunter on this floor have not the last role. You need to stand next to the magician to be able to support his window with your fire (I recommend a talent №3 at level 25). It is necessary to stand side by side and help, if the mage asks. And he will ask because he cant cope there alone. With all this, you also need to keep the window number 3 in view, and help the dwarf not be distracted by a crossbow from afar, again at the request of a dwarf or if you will see enemy by yourself. But that is not all. After 30-40 seconds of the beginning of the event in the lair window numder 4 will be active, there will be a few mobs but they will. They came two times. So you need to catch everything. Of course, when you approach the magician, it will be necessary to repair his window, since he does not have time to do this. In this event i have played at Victor and I did it, so do not think that this is difficult, but not easy.

Thus, by following this instruction, you will be able to pass the challenge. Maybe not at the first time, but you will. The most difficult thing was to come up with tactics, since the heroes 4, and windows 7. In the head does not immediately fit.

Warhammer: Vermintide 2 – Last Respects / Zingler’s Bones and Where to Bury Them

A build that has enough unique interactions that I believe it’s worth documenting. ContentsGuide to Sister of Thorn BuildA Murder of SpritesA Sustenance of LeechlingsAn Attendance of MunificentsThe WeaponTalent 1Talent […]