This achievement is a real pain, so here’s how I got it while mitigating the grind a little.

First things first, you’ll want to jump into Grimmsburg. This level has those Gloomy things on the third wave; a single hit from a level 1 Burst Arrow will do them in on Normal difficulty.

For a Hero, I suggest Bravebark. Assuming you haven’t leveled him up to 10, max out his Rootspikes, Oakseeds, and Branchball abilities at the very least. This will allow him to cause area damage, produce a couple of mates to block a few of the incoming Stayrs in the first two waves, and occasionally yeet one of the goat guys off the map. Combined, this eliminates your need for a barracks to prevent a game over before the Gloomies show up due to escaping Satyrs.

I set up two Archery Towers in the places shown in the image. Be sure to place old Barky where he’s standing in the image as well to maximise his blocking potential. 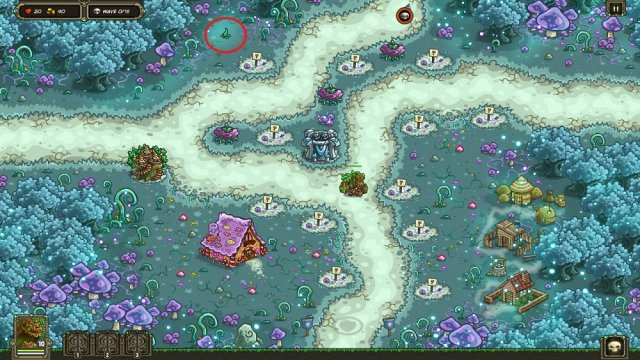 Set them up here so that your towers don’t kill the Gloomies too early; you’ll want them alive for a little bit at the start so that they can spawn more and give you more chances to get a direct hit with the Burst Arrow. And don’t forget to click on the beanstalk in the red circle a few times; it will give you 150 gold and allow you to upgrade the second Archery Tower to an Arcane Archer.

Important note: You shouldn’t have enough money to buy the Burst Arrows yet, but do notupgrade the Arcane Archers with Burst Arrows between now and the Gloomy wave, for reasons explained in the next section.

Next up, start the wave. And then walk away.

That’s right! You are free to do something else for a little while! Free!

However! Be sure to keep an eye on the time; at the 2 minutes 20 seconds mark, the next wave warning will show up and you’ll want to get your towers prepared for the Gloomies when they show up at the 2:50 mark. So grab a stopwatch or something.

Once the second wave of Satyrs are all dead (normally around 2:35), upgrade your Arcane Archers with Burst Arrows. Make sure they are all dead before you do this because if one of them shoot off, it takes about 10 seconds for it to recharge.

Another important note: You have to upgrade them around 10 seconds before the Gloomies arrive, since it doesn’t automatically give you a Burst Arrow; it needs 10 seconds to charge when you upgrade it as well.

Once the Gloomy wave starts, you have another minute to do stuff. Get a drink, do some stretches or, if you have no other options, talk to your loved ones. At around the 3:50 mark, all the Gloomies should be dead.

Over the course of the wave, the two Arcane Archer towers will shoot between 7-9 Burst Arrows between them. Of these, I found that 1 should score a direct hit at the very least every time. If you’re lucky, 2-3 might get a direct kill in the wave.

Once the Gloomy wave is finished, hit Restart and do it all again until you get the achievement.

If you are immensely unlucky and got no direct Burst Arrow kills over the course of the game, and only manage to get a single direct kill every time you try this method (which takes around 4 minutes from setup to the death of the last Gloomy), you’ll be doing this for about 3 and a half hours.

But hey, at least this way you’ll be spending only half of that time staring at the computer screen during the grind.

ContentsCampaign and HeroBackgroundSecrets / Click and ActivateTower / Buildings Campaign and Hero These are the achievements related for the campaign and hero: Get the party started Win stage 1 with […]

How to beat any map with 3 Stars using 1 or 2 towers. Towers Info: You have to complete few first levels to get “Barracks” upgrade. So basically at the […]