There are times when you need just exact amount of liquid transported to some location. This guide will help you to achieve that.

In the Space Industry upgrade we have received different rocket engines and a differentiation between fuel and oxidizer tanks. Because of that and varying distance to asteroids we can reach some of them with less fuel/oxidizer that a tank can hold. We can fill them to the brim of course, but there is a problem – any and all excesses are lost when rocket returns from the trip. That’s right, rocket always returns with completely dry tanks!

That’s why we can and should fill only exact amount of fuel and oxidizer in order to conserve resources.

First, you obviously need some liquid that you want to transfer – it should be more than 1 full tile height. Then, of course, a liquid pump, some piping, wires, one liquid valve and a bit of refined metal for automation and element pipe sensor. 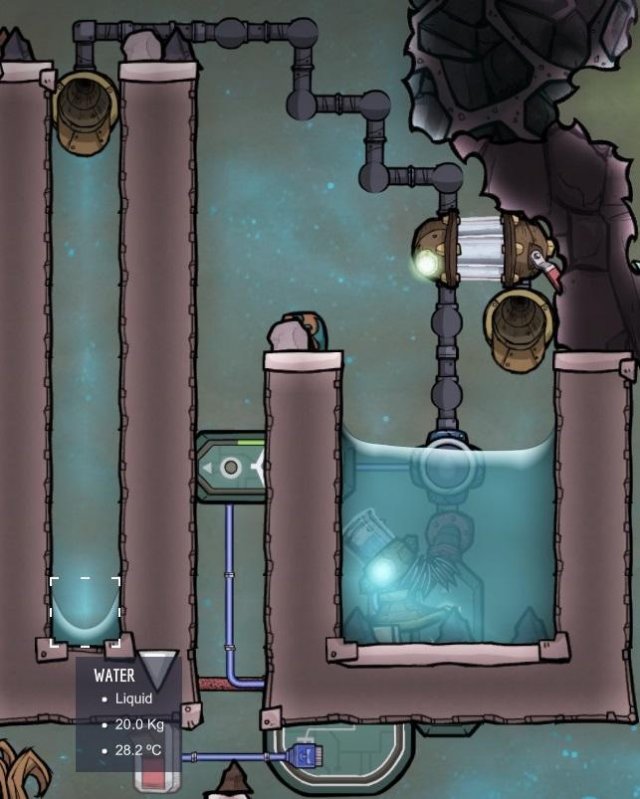 Here I measured exactly 20 kg of water, but it can be done with any liquid, even liquid oxygen or liquid hydrogen (assuming that it will not change state during pumping, of course).

The build is extremely simple, the only thing that should be noted is the valve – it should be set to 9 kg/s throughput.

Again, this is simple too, here is the screenshot: 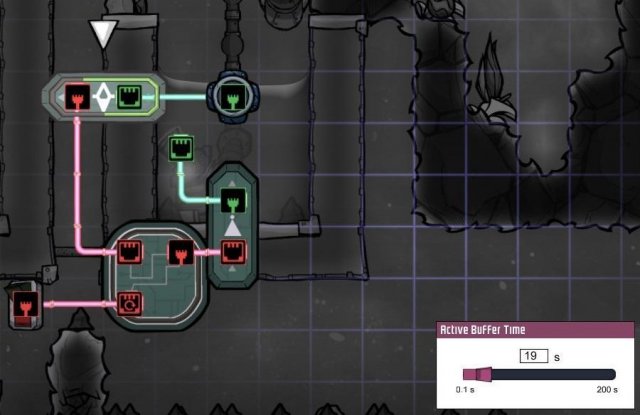 The filter gate should be primed to N-1 seconds, where N is the required liquid amount in kilograms.

Be warned that while memory toggle saves it’s state on game load, filter/buffer gate is not, so try to not leave the game when the operation is in action, as otherwise the result can not be predicted.

The switch is for starting the liquid transfer process – it can be automation from rocket or anything else.

Also, when building the automation, FIRST CYCLE STARTS WITHOUT WARNING (due to memory switch being in off state when first built), so either do a first ‘dry run’ without liquid or be prepared for the consequences.

If you wonder why there is a valve in the build, there is an explanation.

The liquid pump has a ‘warmup’ state when it is turned on and the first packet is always 2kg. When pump is turned off, there is a ‘cooldown’ state of the pump and the last packet is 4 kg most of the time, but sometimes it is 6 kg. I was unable to replicate exact requirements for the 6kg packet, I’ve seen it one time only.

A collection of useful structures for in-game colonies, current to Ranching Upgrade Mark I. Each build includes exposition regarding the room’s role, advantages, and design philosophy. Other ONI Guides: Gameplay […]

Recycle your water in a three step system. Remove germs without using much power. Other ONI Guides: Gameplay Tips. Stress (How to Handle It). Liquid / Gas Valve Guide. Ultimate […]

Oxygen Not Included – How to Create Asteroid

This guide covers the basics of working with .yaml’s when designing a custom world for Oxygen Not Included. ContentsIntroductionFile LocationsElementsTemplatesWorldgenWorldsVolcaneaUnknownCellsAllowedSubworldsOilPocketsSurfaceMagmaVentBottomSurfaceCragsWorld sizeSubworldsBiomesFeatures and POIFeaturesPoints Of InterestTroubleshootingMiscellaneaTraits Introduction The information detailed here […]