With Dices special, you can predictably get the opponent to fall for a raw Parry.

The Set-up is Simply Having Super 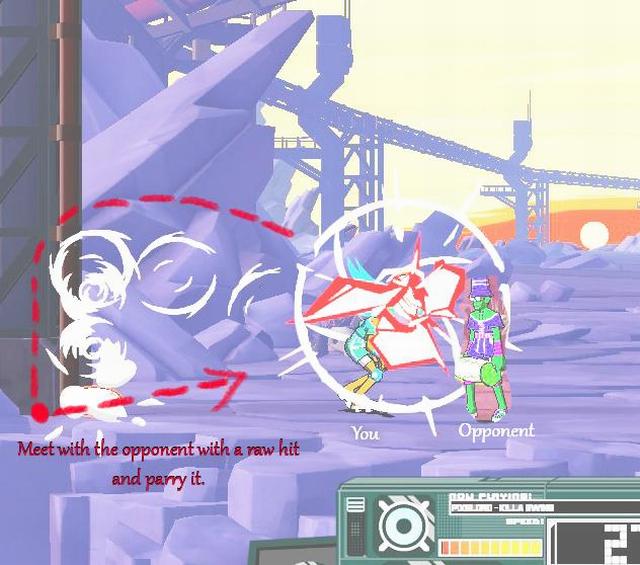 Note: this tech is advanced and works on people who know and anticipate Dices Super and the angles it provides.

A simple but elusive tech that catches a heck ton of people. Dice is the best one in my oppinion to be able to do this the most consistently, mostly because it hinges on that your opponent knows where it will go and you getting to it before them.

What It Is About

With super, from almost any range, you can get the ball to slide along the walls (Or not) and have the ball bounce towards the enemy. As the super does its thing, you get close to the opponent and pre-swing to get the ball first and hold bunt to instantly parry when you do hit the ball.

Most opponent will either try to bunt, or swing. But mostly bunt. This catches them and thus, with high speed, it kills them.

The way parrying works is simple, once you have parried someone, the hitlag will reduce itself for release, a Raw parry like this is then viable.

Either be far away from Dice, target the ball from its first bounce instead of its launch, or grab the ball instead. But if the dice player catches on, he can raw hit the ball and NOT parry, which results in a death for you once again. It is simply best to try and stay away from Dice when he has his super.

Letting dice hit the ball is a good counter, but that is only assumed if he hits it at all. If you dont challenge this Raw Parry, a fundemental Dice will let the ball just fly trough in anticipation of the super angle being tricky enough.

Why It Is So Effective

Dices super making the ball fly out of his paddle before the end of hitlag induces reflexes on the opponent. Most of the time, they MUST respond or WANT to respond. It is an absolutely amazing mixup with dice that I theorised in Lethal League 1, but parrying worked differently there so it was not as viable. But now, it is. In Low speeds, getting a parry and thus hitting your opponent but not killing means he can do it again due to how a succesfull parry gives you full meter.

A guide on how to activate special costumes for select characters. Other Lethal League Blaze Guides: All Unlocks. Beginner’s Guide. Speed Scaling. Candyman Guide. Secret Techniques. How to Unlock the […]

An overview of each characters angles and spreads showing what kind of options they have. The Spread diagram also showing the options in each attack mainly Swing and Spike to […]

Lethal League Blaze – How to Unlock the Grand Slam Achievement

Below you will find a step by step guide to unlocking the Grand Slam achievement. When you unlock this achievement, you will also unlock the Dark Safety Weapon skin for […]