In this guide ill briefly go over every gun that is currently available in ROE.

UPS.45 is the best pistol in ROE but still one of the worst guns you can use, pistols in general are not very good but it deals decent damage, fast rof and has little recoil. keep at close-ish quarters where your too far away for shotguns to one or 2 shot you but close enough ti hurt your enemy.

Glock 17 is by far the worst gun in the game with it just being a worse version if the ups but using more available 9mm rounds.

Desert Eagle is just not very usable with a slow fire rate very rare ammo (50 acp) but high damage and range. try keep to mid range if using this.

The usp and glock currently do not spawn in game and can only be acquired by using the glider or snowboarder kit.

Citori is overall quite a bad weapon with the tiny magazine size and doesnt deal enough damage to oppenents its not very good but better than the pistols. try stick to close quarters when using this gun, the damage is minuscule at any distance greater than 12m.
Use the choke.

Origin 12 absoloute beast in the early game being able to secure kills fairly easily on unarmoured opponents. It 5 shot magazine but can be increased with extended magazine (AR) which increases the rounds from 5-10. Again stick to close quarters this gun is awful at mid ranges. You can use the AR muzzles and extended magazine on this gun. I suggest using the choke becuase i find the recoil controlable but having a tighter spread allows the gun to deal damage easier. use theextended magazine, vertical grip because horizontal recoil doesnt really make a difference and any 1x sight.

Remington 870 is debatably the worst shotgun due to it being pump action and not dealing enough to damage to compensate for the rof causing a lot of losses in conflicts with armoured people. the Magazine is higher than the citori but since the citori is semi-auto i feel its more useful. stay in close quarters for a chance at killing someone. use the choke and any 1x sight.

Overall the shotguns are very bad late game when everyone has armour, while the origin can still hold its ground it still struggles to do so.

MP5 is the best overall SMG for beginners and has decent recoil and range with reasonable dps.
try use this at close to mid range. The mp5 is really good because of how non-situational it is with it being able to secure kills quite easily. i recommend a 1x sight and the 2x scope, suppressor and extended magazine.

MPX is the suppressed variant of the MP5 but with a smaller magazine. The extended magazine is much more necessary due to only 20 rounds being available.

Vector i believe this gun has the highest ROF in the game and is the most deadly gun when
8m away shredding your enemies apart. this is better than the mpx due to it being more viable late game keep to very close range. 4x and 2x are pretty muc useless so stick to any 1x sights, extended magazine, vertical grip and the suppressor.

Any sight is good for the mp5 and mpx.
Use Angular grips because vertical recoil is easier to control for the mpx and mp5 and use the vertical grip for the vecter to keep your aim more on target. 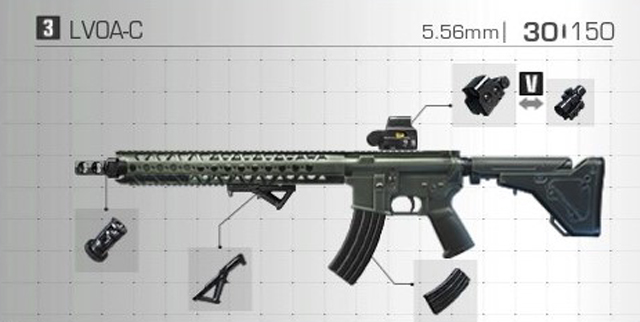 LVAOC is a great weapon for beginners as it has low recoil and decent close to mid range accuracy. Think of it as the scar l from PUBG. Try use a suppressor on this gun but a compensator will do just fine, increased magazine for more more spray, 4x with compensator 2x and 1x scopes for anything else and the angular grip.

M4A1 is the most stable and consistent weapon currently in ROE and has close, mid or long range capability. Recoil is also pretty is next to nil when fully kitted out and fires faster than the LVAOC i’d consider this gun tied top in the assault rifle category (excluding the AUG). I recommend the stock, any 1x sight or 2x scope or 4x if you’re skilled enough and the angular grip due to the the only recoil you have to worry about is horizontal.

FAMAS is the fastest firing of all the AR’s and is the least stable for long range with pretty bad recoil. Best is close range usable at mid range. Great for the starting fights. I’d use a
compensator, 1x or 2x sight, vertical grip due to the recoil being quite high and the extended magazine is quite useful due to high rof.

The majority of sights work on on the LVAOC and M4A1 but try keep a 1x on your gun as well as a 2x/4x but the FAMAS is not usable with anything larger than a 4x.
Use Angular grips on most auto guns because vertical recoil is easier to control (exept those with bad vertical recoil).

GROZA is just like the famas but more deals more damage as it uses 7.62 ammo. I have found it to be quite difficult to control with the high recoil and rof making it more suitable for close range. Try to refrain from using this at targets from 20m> away. i would use a compensator to try numb the recoil, extended magazine and any 1x sight or 2x if you can control the recoil well enough.

AK 47 is considered by many as the worst or one of the worst assault rifles in the game simply due to the high recoil when fully kitted or not. I however consider it to be tied top with the M4A1 because of the shear damage this thing can put out. This gun excels at close range and is just as good at medium and can go long range if used like a DMR. I’d use a compensator to numb the recoil, extended magazine and any 1x scope i find that 2x scopes are more tricky but are still usable and a 4x if your using the semi-auto mode.

Try stick to low magnification sights when using this caliber of weapon and having a secondary 2x scope.
The Compensator is better than the suppressor for these high recoil guns.

MK12 is a great weapon for mid – long range with it being quite non-situational being able to compete with assault rifles and being able to spam with little recoil but again the power is lacking when using this, overall this is a very solid gun for any conflict. try use a the 2x and 4x scopes for this.

G28 is the SLR of PUBG and has ridiculous recoil and is out classed by the snipers because of it but 2 shots anyone with a lvl1 vest or no vest at all (3 for superior vest). i think this gun is better than the MK12 but just barley with the recoil being very bad for spamming but the damage is very good making it a hit or miss for me, just depends on what mood im in if i keep it or not. use the compensator, vertical grip, extended magazine and 2x/4x scopes and 8x if available.

Mosin Nagant is a great ready to go sniper rifle as it comes with a built in 4x scope making for good early game and late game while other snipers are better. keep to mid – long ranges. Use the extended magazine for this while making not much of a difference it can work as a fail safe if you forgot to reload.

Remington 700 is a better sniper than the mosin simply due to it having higher damage, less bullet drop and being able to put a scope of your choice on it. try use an 8x scope but the 4x is still very viable. keep to mid – long ranges. use the extended magazine incase you cant or forgot to reload and the suppressor so you dont draw unwanted attention to yourself.

All snipers instakill/down on headshot.
The mosin can be better than the Remington because it comes with a scope if you’ve gotten unlucky and found no 4x but other than that the remington is slightly better.
Using anything other than the suppressor i have found to be useless because of recoil not being an issue but if you find something you may as well equip it.

AUG is definitely the best AR in ROE with better overall stats to the M4A1 which out weigh the dps of the AK but it is still close. You get 42 ammo instead of 40 ammo when using an extended mag and has very little recoil with a angular grip.

VKS comes as a silenced sniper rifle and it you can kill the enemy with just one shot, however with it using 50 acp you can only find it in the airdrop you looted it from or from desert eagles you can find both only giving 10 bullets. The VKS is definitely the most powerful sniper but since the ammo is so low it comes at second place to the M200.

M200 is an overall great sniper with incredible range, good damage (55 on body with superior armor and kill on headshot) and in the air drop you get it from comes 20 rounds making it more usable than the VKS. If you get a suppressor and an 8x you can dominate with this thing.

Get ahead of the game and see all the possible helicopter landing locations. Use it to quickly plan your success with your squad, devise a plan of entry, advantage and […]

Ring of Elysium – Case No.007 Night in Dione (Detective Event)