A comprehensive guide to surviving in Super Animal World!

Alright! You’ve gotten used to the controls, you’ve got your animal and you’ve hopped on the eagle, eager to start getting to work. As a sand hating man once said “This is where the fun begins”.

Your landing can make or break you. Because landing at the wrong spot can lead to death in less than 10 seconds. Since you’re here reading a guide on how to play better, it’s safe for me to assume that you don’t fare too well in a fire fight. If you’re not confident enough to stand on your own in an encounter, your best bet would be to land as far away from enemies possible and loot in peace.

Aim for this kind of scenario: 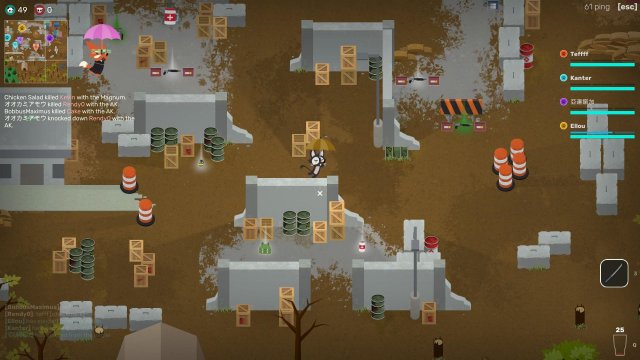 Away from the carnage, and looting at your own leisure. 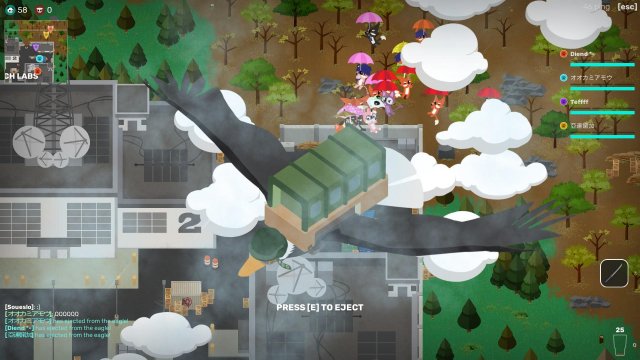 If I jumped now, I’d have to contend with everyone in a mad dash for weapons. Very risky, only crazy people would drop here.

So you managed to survive your controled descent and got yourself a decent gun. But alas, you don’t know how it works! Don’t worry, animals don’t get guns everyday after all. But if you want to reach the top, you need to know how to use whatever tools you have at your disposal.

Guns can be found all over the map in numerous spawn locations or dropped from slain enemies. Each gun can be found with different tiers, Gray for Common, Green for Uncommmon, and Blue for Rare. The higher the tier, the better the performance.

There is also the Delivery Mole that drops crates containing Gold tier weapons. These weapons are the best the game can offer and in the right hands, can be a top threat.

Finally, every weapon uses a certain type of ammo. Several guns use the same type of ammo and thus use the same ammo pool. Reloading takes ammo from your total ammo stock and into your gun. In other words, if you have 90 ammo on you and you reload an empty rifle, you’ll have 30 in the gun and 60 in your reserves. If you pick up another rifle that has been fired (let’s say it has 24 ammo) then what you’ll have is 24 in the gun and 60 in your reserves. Did you get all that?

Now, Let’s get to the guns themselves now shall we?

Weapons are arranged according to ammo type. 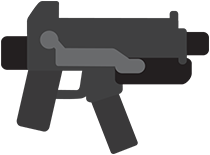 You’ve gotten this far… In the heat of battle, every move you make counts. A single step can be the difference between life and a very dissapointing death.

In this game, bullets need to travel from point A to point B. Because of this, you need to lead your shots. What does this mean?

Aim where your target will be, instead of where they currently are.

Predict where your target will be, and then start raining lead. It’s going to make it hard for them to dodge and sometimes they’ll even run into it themselves by accident!

But what if the enemy shoots you? And I just told them how to aim! Not to worry! If you paid attention to the controls, you can press space to jump roll!

Jump rolling is a versatile skill for maneuvering offensively or to dodge bullets defensively. If you time your jumps consecutively, you’ll get a speed boost indicated by sparkles appearing. 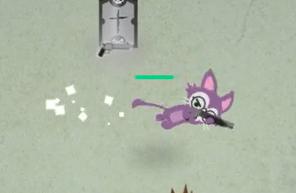 With this, you can make a clean getaway when things don’t go your way or move quickly for a flank. Be careful though, when rolling you are not bulletproof. Rolling into bullets can get you killed without being able to shoot back. Try to think fast and assess the situation.

Oh yeah, and know when to cut your losses and RUN.

Somebody Call a Vet!

Oh no! A group of animals showed up and wounded you! Now you’re yelling at Teffff for a refund because his guide almost got you killed! First off, shush, secondly this is where healing items come in. 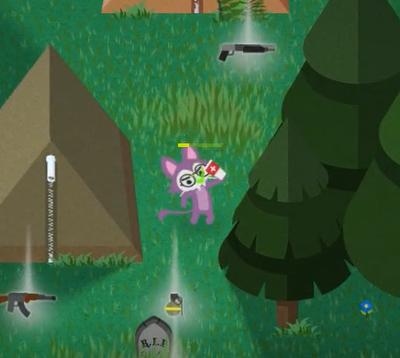 The main way to restore health is pressing Q to drink your health juice. Doing so will slowly fill up your health bar while your supply of health juice goes down. While you’re doing this, you are unable to shoot and moving will cancel the action. Only do this while in general safety in cover!

Scattered around the map are coconut trees. Eating a coconut by pressing E on it will restore a small amount of health. The action is quick and only takes an instant. The only downside is how specific the spawn location for coconuts are on the map. 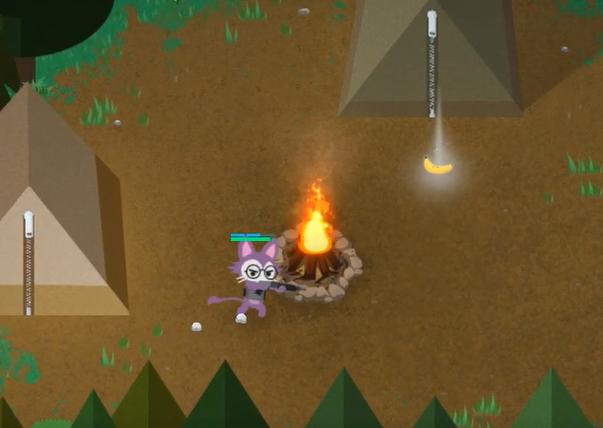 Campfires are located around the map for use. Simply approach one while wounded and the fire will magically start up. While within the campfire’s radius, you will constantly regenerate health regardless of what you’re doing (unless what you’re doing is getting shot that is). Keep in mind that campfires will heal everyone, friend and foe alike. Also others can see a lit campfire even when it’s in shadows so watch out.

You may have noticed amidst the chaos that a strange green fog of toxic death is closing around you. Not to worry, aside from being 100% lethal upon overexposure to the stuff, the gas is going to be the least of your concern. However, in the event that you find yourself at the edge of the safe zone, you need to be mindful of where you stand. 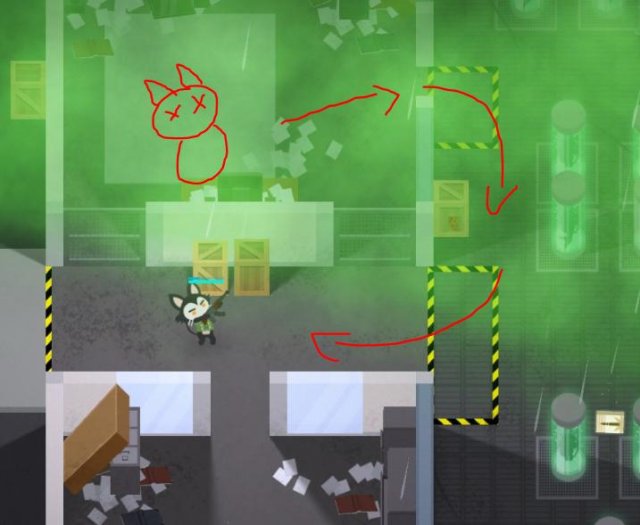 The gas closes in every few seconds, indicated by a timer on the top part of your screen. As the game progresses, the safe area becomes smaller and smaller. Eventually the safe area will shrink to the point where it doesn’t exist anymore. This means, the gas will engulf the whole map and the last one alive wins. Stepping inside the gas will slowly drain your health. Drinking health juice can slow down your health drain however not for long making this tactic a bit of a last resort.

So how are you supposed to deal with this?

A warning sound plays whenever the gas moves. If you’re outside the safe zone marked by the map, you need to keep mind of where the gas is currently. If you are inside, you can ignore it until the next time it moves. If you are far, you might want to start moving.

You don’t have to explore Super Animal World on your own! You can team up with friends in Duos and Squads mode. Or if you’re feeling adventurous you can have random people on your team. In any case you need to work together as a pack.

A team that sticks together can survive better. You can coordinate with your teammates by pressing tab to switch to team chat. You can also click on the map to drop a map marker. 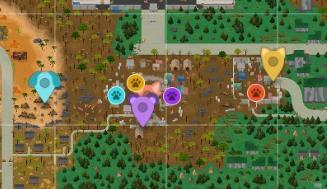 You can use it to signal where to drop, or where to meet up if you get separated.

Aside from being able to cover you, your teammates can also revive you when you get downed. Simply approach a downed teammate and press E to help them up. Be careful though, while helping your friend up you are defenseless and you might join your friend on the ground if you’re not careful.

And if you get downed yourself, try not to lead your enemies to your team by directly crawling towards them. Find some cover and hope they can deal with it. 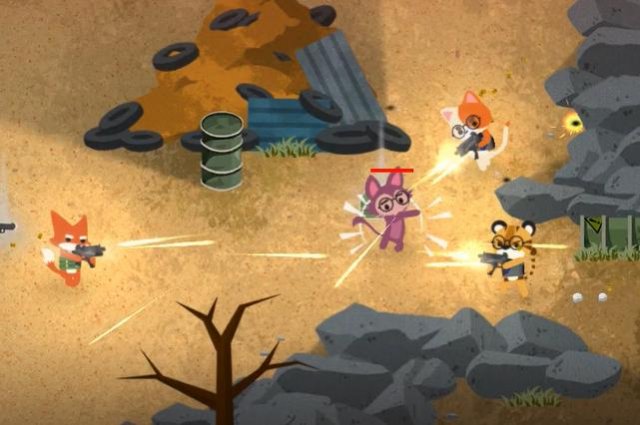 Ever wonder how the guns in Super Animal Royale function? The advantages and disadvantages to each? Why or when you should consider using them? Well, this guide aims to at […]

Find and use campfires to get a stick with marshmallow on it. The Map Click to enlarge… Recommended for You Super Animal Royale – Starters Guide (Useful Tips) Super Animal […]

This is a spoiler guide to show you how to get the 2 milestones in the Saharaland Update. How to Get Secret Milestones The Skullcat Sphinx The secrets of the […]