This is where I’ll be posting any information I find about the game’s items and mechanics. Beware of spoilers.

Holding LT/L2 will raise your shield.

If you attack whilst blocking you will perform a short range thrust attack.

If you tap LT/L2 you will do a shield bash. This will knock back and stun enemies briefly.

Holding A(xbox) or X(ps4) will make you sprint. Attacking with your sword during a sprint will do a vertical power-slice. This move can destroy tripwires, which may drop string. 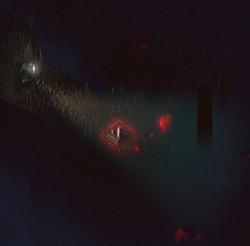 Extra Controls: If you’re holding a torch you can tap LT/L2 to wave your torch in front of you. This can be used as an attack, but can also be used to burn away vines, and light baziers.

If you hold down on the D-Pad you will sit down. This hides the HUD. I don’t think it’s very useful for anything but fun screenshots.

If you tap down on the D-pad you will drop a crystal shard. These give off the same type of magic light as the lantern. Don’t forget to pick them back up later.

Up on the D-Pad will change your arrow type. Make sure you use the right arrow for the job.

Food: If you have a bottle of water, you can mix any three food items with it to make soup.

Soup [++] is made by adding two vegetables and one meat. Pretty good.

Stew [+++] is made by adding three meats. Now that’s some good stuff!

Broth [+] I guess it’s what you get if you just add veggies? I like meat so I never make this stuff. 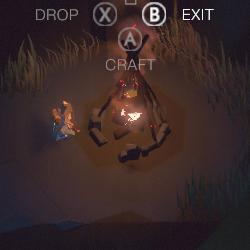 Elixirs: Now this is where things get fun. Maybe less delicious, but still, fun.

Now, I personally find mushrooms unpalatable, but that doesn’t stop me from enjoying the benefits of a strong elixir.

With a bottle of water, some food, and a single mushroom you can make an elixir.

The red elixir is my second favorite. It makes you hit harder! Who doesn’t like killing things faster?

The green elixir is my favorite! For some reason, when you drink it, you’ll get more crystals from red crystal enemies. Very useful for that hungry lantern. and other things.

The blue elixir is a life saver. It pauses your hunger/thirst meters for a while.

The yellow elixir… well, I haven’t tried it. The pungent smell almost made me retch. But I heard a rumor in my travels that a yellow elixir can harden your skin, and protect you from damage for a while. I cannot confirm that, however.

A purple elixir can be made by mixing blue mushrooms with a red mushroom. I drank it, and… uh… I didn’t notice anything change. I heard a rumor that a purple elixir might reveal the map of the floor you’re on, but again, I cannot confirm this.

The Spear: The spear is a long range weapon which can be used for fishing. If you hold RT/R2 while in water you will aim down to stab the fish. Otherwise this weapon can be charged for a power attack, and it has a sprint attack, as well as a bash attack which can be executed by tapping LT/L2.

Spike Arrows: These arrows will go through multiple enemies, dealing enough damage to destroy the shielded crystals in a single hit.

Fire Arrows: These arrows shoot differently from others, they charge up an arc slowly, and land at the reticle. They give off an intense, blue light. Anything too close to the flame, other than yourself, will take a bit of damage, but it seems especially dangerous to darkness creatures.

The Iris Skull: This badass gnome hat will make your arrows deal twice the damage they normally do!

The Fang Skull: I’ve been told this mask will make your enemies hurt when they hit you. Sounds pretty good.

The Crystal Skull: This thing looks pretty darn cool. It also glows, helping you see in the dark. It seems to give off the same magic light as the lantern, so it might help you spot traps.