Quick and simple guide on how to properly choose a server without crashing.

Connecting to a Server

In the Atlas there are two main realms and types, EU and NA server.
Each server is equipped with the option of PVP or PVE, obviously PVE is going to be easier to start in but if you want a challenge starting off PVP may be fun for you.

In these servers they each have a map called “Ocean” the map looks like this.

Don’t worry about the size, I know it may be intimating at first but it’s not something to worry about. It takes 30 hours traveling across the map in a horizontal line (which is impossible as there are islands and other natural obstacles and encounters you will face). So even longer than 30 hours!

Choosing an Island to Spawn in

When choosing an island in Atlas it will by default show you an image of a map with various squares and titles to each one such as “G7” or “A10”. These islands are various spawnpoints you can choose in the Atlas world. Each server has all the islands connected in one world. 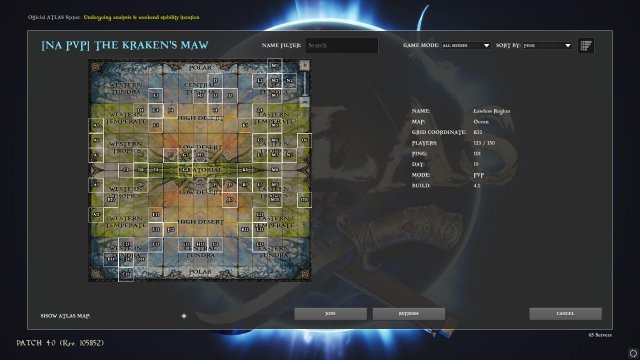 You can change this format of displaying the islands to layered texts with organized rows by clicking on a small button on the botton right next to a white text with ” Show Atlas Map” The buttom by default will be white (white signifying it’s selected), click it and it will turn grey changing it to the layered text format. 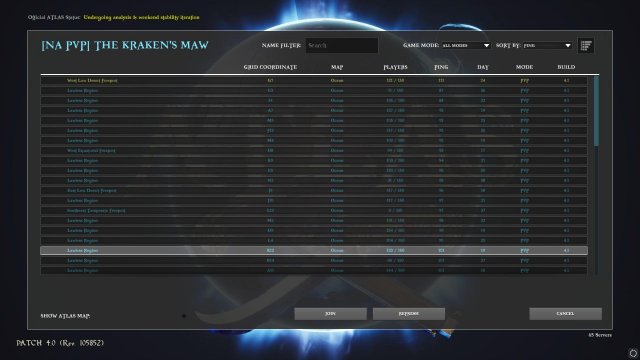 Which Type of Server do I Join? Lawless or Homeport?

There are two different types of islands, there are Lawless Regions and Homeports. The difference in them is important when starting out.

If you decide to spawn into the Homeport island, it will spawn you in a small town with NPCs inside. One of the NPCs gives you access to a blueprint for a raft. This is an easily accessible method to get a raft early on.

Each starting island also has the same layout, near the center of the island there is a Greek temple, next to it there is a pond filled with clean water! Go up to the water and press e (or your “use” key) and you will drink water. You can also fill up your water skins here. Each island also have different types of species of monsters/animals so watch out.

The lawless regions spawns you within the square you chose (island somewhere nearby) but doesn’t specify where inside it. It has been recorded already of people spawning in the middle of the ocean stranded with nothing and stuck to die from the cold water.

P.S. Make sure to check out our channel for more guides/tutorials.