The autocannon can be built in Pre-Hardmode as soon as the Mechanic is found.
The build is somewhat large, about 40 tiles in lenght and 8 in height (minimum) so plan accordingly as where to build it.
There is a more compact version about half the lenght, but may not be as reliable, especially during Blood Moon.

It’s great when combined with lava as a damage source, as they don’t interfere. i.e. dart traps cause invincibility frames when hiting an enemy and that enemy will not take damage from another dart, but this doesn’t prevent lava or spears from dealing damage. Invincibility frames last for about 10 frames or 0,15 seconds.

It’s quite effective until mid-Hardmode (post-Mechanical Bosses), after that Super Dart Traps should be used.

Wrench and Wire Cutter – One colour is enough, but two are required for compact version.
Sold by the Mechanic for 2 gold each.

Mechanichal Lens – Sold by the Mechanic for 1 gold.

Wires – Lots of them. Don’t buy these, they can be looted from the dungeon, temple and caves.

Dart Trap – 18 of them… They cannot be bought, only looted from dungeon and caves.
Super Dart Traps are even better, but if only there would be that many in a single world.
18 traps are a perfect number for continous fire. Less can be used, but in that case there will be a gap in the firing pattern.

Actuators – One will be enough, but one for each dart trap saves time. Sold by the Mechanic for 10 silver.

1 Second Timer – Crafted on the Anvil using a Gold or Platinum Watch and a single wire.

Yellow Pressure Plate – 18 of them. Sold by the Mechanic for 50 silver each.

Bird Statue – These can be hard to find, but can also be crafted using 5 any birds and 50 Stone blocks at the Heavy Work Bench.
If you want a compact version use Bunny or Goldfish statue. These can be crafted as well using their respective critters with the same recepie as with the Bird statue.

Bucket of Lava – One bucket is enough.

Actuation Rod – Crafted at the Anvil using 50 Actuators, 10 Iron or Lead Bars an 10 Wires.
(De)Activates Actuators without the use of switches and wires.

The engine that powers the autocannon is a bird engine shown on the picture below.
It’s a Bird statue wired to a 1 second timer and Yellow Pressure plates are placed along the path. The frame can be build out of any solid block and the path has to be 1 block high. The statue size is 2×2 blocks so it’s placed 1 block lower than the path so that the bird doesn’t fly over the plates. Place the Pressure Plates on each second block so that there is 1 tile space inbetween each one.

Next to the last pressure plate, place a solid block and hammer it so that the slope is facing the plates (refer to the picture, it’s the darker block at the right end). Place an Actuator on that block and deactivate it. Place another block next to it and finish up the frame so that you have an empty space on the last tile. Put Lava in that last free space. 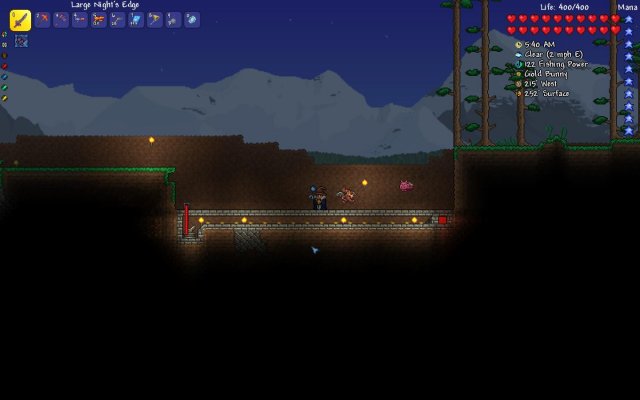 For a compact version, use a bunny or goldfish statue and you don’t have to leave 1 tile space in between each Pressure Plate, just place them next to each other. And fill the plate area with water if using Goldfish, everything else is the same.

Note that this version may not be reliable during Blood Moon, when bunnies and goldfish turn into bloodthirsty monsters changing from Critter AI to Enemy AI, meaning they will go towards you and then the autocannon will work only if you stand on the lava side of the engine.

The barrel is a simple frame lined with dart traps. Build the frame above the engine (any height) and simply place a dart trap parallel to each trigger so that they are nicely lined up.

Hint: Hammering Dart Traps changes their orientation.
Place an Actuator on each Dart Trap and deactivate it. This will allow Dart Traps to shoot through each other. When done, it should look like this: 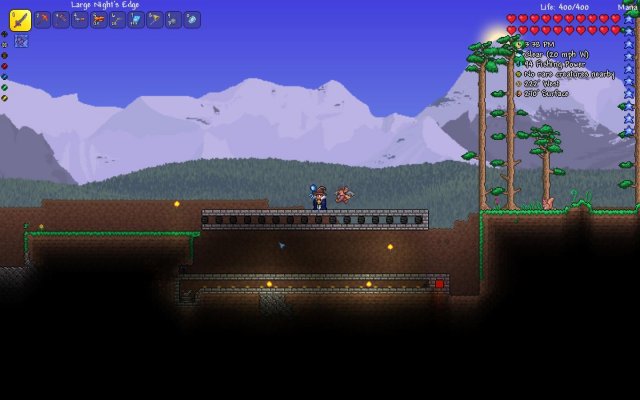 And finally the wiring, connect each Dart Trap with its respective Pressure Plate below.
Connect the 1 second timer to a Bird statue and then to a switch if needed and you’re done. 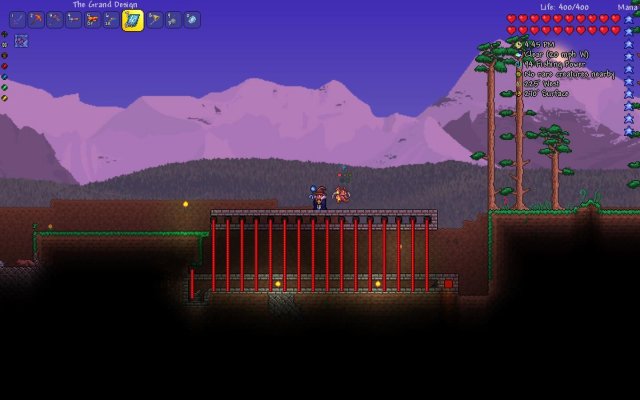 For the compact version, use different colours for the adjescent Plates/Traps so that they do not overlap.

Unfortunately, I cannot record videos to show it in action, so a screenshot will have to suffice. 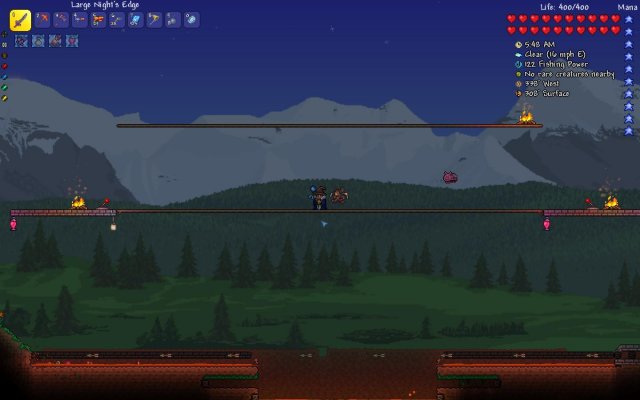 Every dart is spaced evenly and will continue to be so as long as the machine is on. And every dart will deal damage, so don’t place Dart Traps all next to each other with the Bird Engine, because remember the invincibility frames from Intro.

More Terraria Guides: Beginners Guide (Journey’s End / Update 1.4). How to Access The Easter Egg Two Evils World. How to Get Platinum Coins Very Easily. How to Obtain the […]

Terraria – How to Beat The Destroyer

This is a very quick guide on how to beat the destroyer. He is the first hardmode boss you should face. ContentsThe Arena and BuffsRecomended Weapons and EquipmentMeleeMagicRangedAccessoriesGood Luck Fighting […]

How to Beat Eye Of Cthulhu Boss Note: This works on every mode (tested). How-To Chop down some trees and craft wood platforms. Once you have about 1200, build in […]