This section is about these modules: 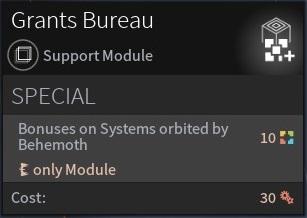 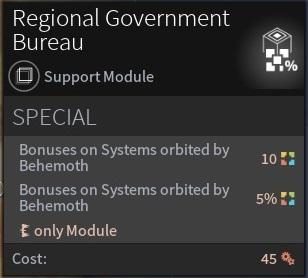 Once you have unlocked behemoths, and E&D S2, you’ll have acces to very first of these modules, without unlocking any new tech. To acces the upgraded version, you’ll need to unlock “Mission flexibility” in E&T S3.

Both will give you bonus from exploited nodules. To get its bonus the only thing you have to do is to park a behemoth equipped with them over one of your systems, and you’ll start getting FIDSI bonus.

In this screenshot you can see a behemoth equipped with them, which I called “Economic behemoth”: 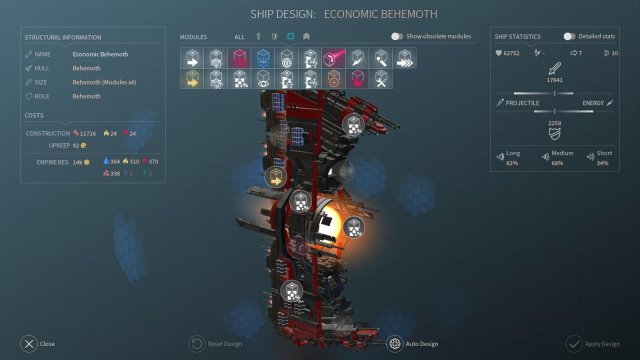 If you look at the desing, I occupied a support module with an engine. Have in mind, that this slot can be used for an extra bureau nodule in case you don’t want to move your behemoth from the system it is providing its bous.

Here also I got 5 support slots, originally you’ll only have 3, but by unlocking “Mission flexibility” tech, you’ll got two extra support slots which are very useful.

In this other screenshot, you can see the behemoth guarding a system and providing its FIDSI bonus. This one is a passive skill and bonus will be automatically applied: 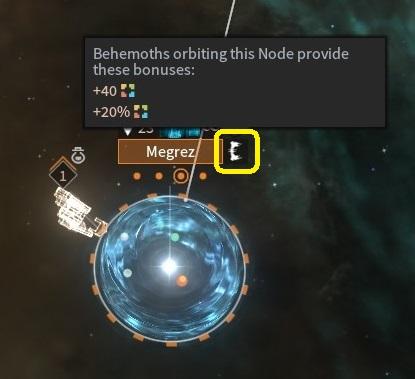 As note, the blue sphere visual effect on the system is due to a Riftborn singularity and not related to behemoth, so don’t expect it.

Even this one may be included into special nodes behemoths, because it uses the same mechanic, I decided to put it separately to show you the bonus you can get. Also I try to made separate desing for that one and other special nodes bonus when playing, to better keep track of my behemoths, but I’m not sure if this is a good advice, because depending your game style mixed behemoths may be better.

The basic modules is also unlocked when reaching E&D S2 for free, while the upgraded versions are unlocked into S&E tree S2 and S4. Here are the modules: 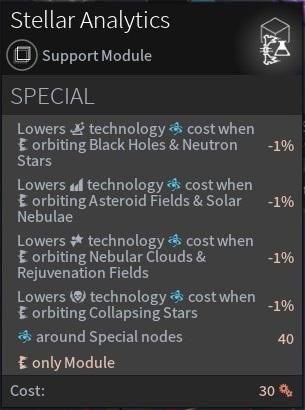 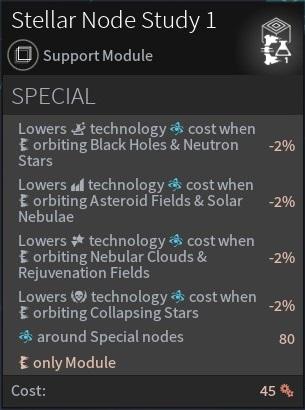 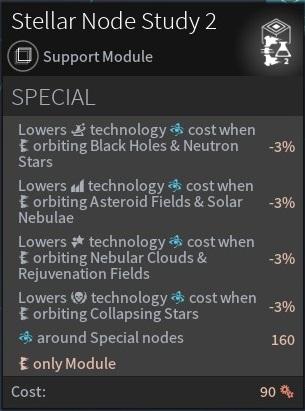 In this screenshot you can see them equipped into a behemoth. As side note, different from economic behemoth, here equipping an engine may be useful depending how far you’re from special nodes you want. 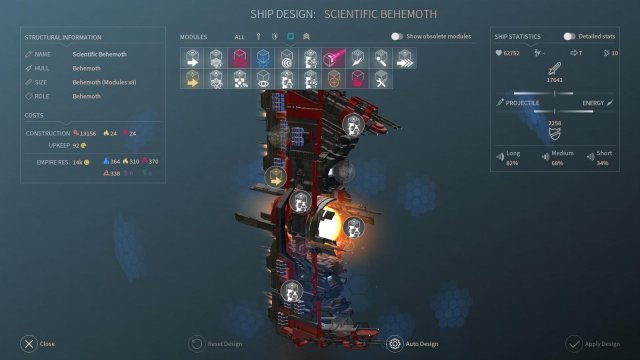 Now the only thing you have to do is park the behemoth over a special node to get the bonus it provides. You also will see the icon over the node and a tolltip similat to an economic behemoth, like in this screenshot: 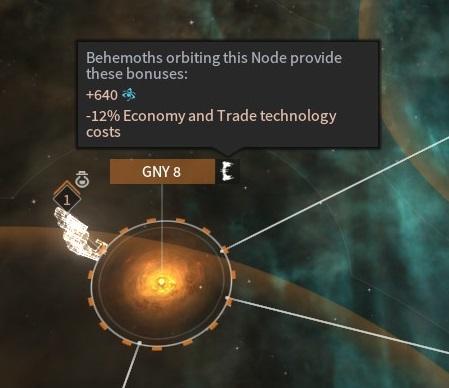 Keep in mind that the Science produced will be the same regardless the node you’re exploitng, but the discounts you get for researching tech will depend on nodule type. For more info of discounts wyo’ll get from every nodule type, just look at the modules tooltip.

This section si very close to previous and modules explained here works in same way, so I’ll only go into differences.

There are two other modules that will give you bonus from special nodes, that can be unlocked in S&E S2 and S3: 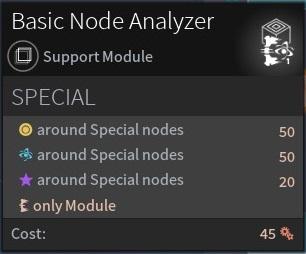 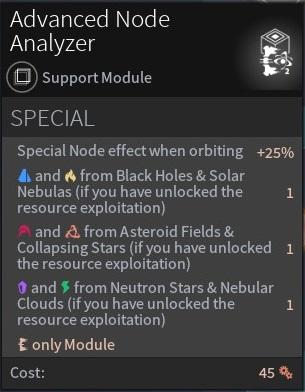 Both are useful in different cisrcunstances. First is useful in early-mid game if you’re short of dust, science or influence. In mid late game those bonus won’t be so significant, and probably will be better changing to a pure scientific behemoth or a one that grants you strategic resources.

The second is useful at any moment you’re shor of strategic resources and don’t have any in your colonized systems. Alas, as you can see, the resources youi get depens on the special node type you parked your behemoth. Note also that the scond one will grant you a +25% special node effect, which is useful if you’re receiving bonus to FIDSI is this node is into your influence zone.

In this screenshot, you can see a behemoth equipped with two of each: 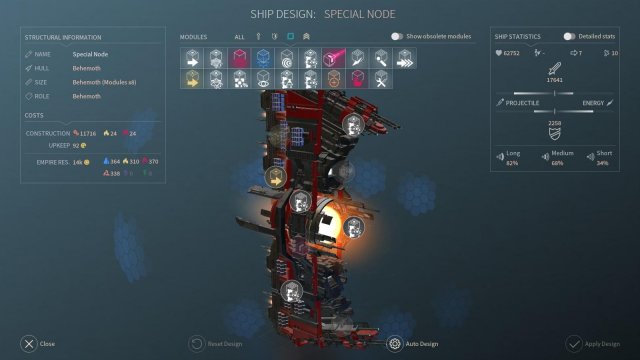 This is probaly not the best configuration you can do, but useful for explaining purposes. As in previous section, consider sacrifice one slot for an engine depending how far you’re from the desired special node.

And in the las screenshot you can see the bonus provided by this behemoth parked over an special node: This section is about these six modules: 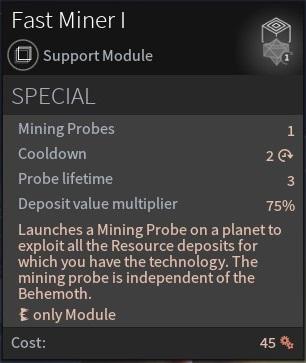 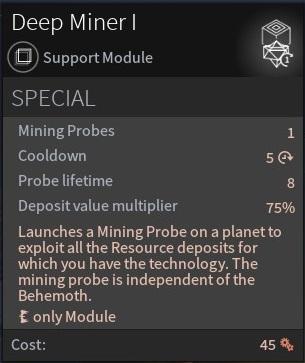 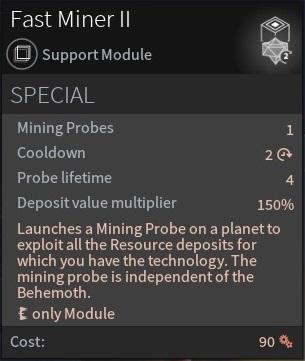 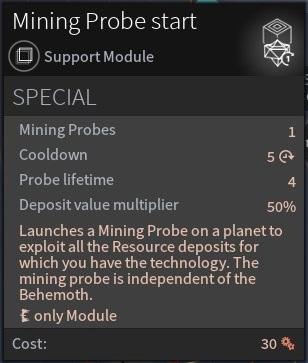 “Mining probe start” is unlocked once you reach E&D S2 fro free, while the other five are unlocked in E&T S2 and S3.

All those modules will grant you probes that will allow you to mine resources from any uncolonized planet you found. This is very useful in cases when you want a resource and from any reason you can’t colonize the planet where it is (like the system is owned by another player or you don’t have the required tech to colonize that planet type).

Different from previous sections, this one is an active skill and youll have to send the probes one by one.

Remember that those probes will mine either strategic and luxuries, so sometimes, even having a close special node that grants the strategic you want, a miner behemoth may be useful to get some luxuries from a system that is far away.

It’s hard to tell what kind of module it’s better here, basically deep miners offers large probe duration at expense of larger cooldown and fast miners have lower lifespan and cooldown. cre miner have large dooldown, large lifespan and offers the best % bonus to exploited resources, but costs adamantian to equip in your behemoth. Mining probe start is usefut at early game until you get any of the other techs. Having this in mind, equip what you think fits better with you gameplay or actual situation.

What i can tell you is that upgraded versions will grant you more resources, as you can see in the % multiplier to deposit value.

As in previous sections, let’s equip a behemoth with mining probes: Here I equipped my behemoth with a sort of every type of mining probes, but when playing it will be more useful to have all of same kind. About the engine, in this case is more useful than in previous sections, cause sometimes the resource you want is far from your systems. Also unlocking “Behemoths generators” in S&E S2 will help you having more mobility.

Now let’s start mining. first you have to do is sent your behemoth to the system you want to mine. Then if there’s a suitable planet, an icon (yellow square) will appear: 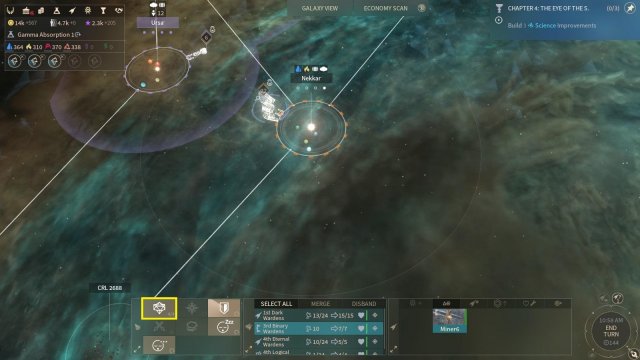 Just click and start sending probes to the planet you want to mine, and you’ll get all resources the planet has. Remember that you need to unlock the techs required to exploit this resource, so if you try to mine antimatter from aplanet with it but you don’t have the required tech to exploit antimatter, you won’t get it, even if you can see it and sed a probe there.

Another way to send your probes is to zoom-in the system, and an icon to send a probe will appear over every suitable planet, like when you send exploration probes to search curiosities.

And here we can see our behemoth mining: Here I sent two probes, moving you cursor over a resource, you can see how mauch of it you’ll get and how many turns, In the example I’ll be getting 4.5 darglitter during 36 turns.

Just as note, seems probe durations or probes theirself stacks, as here I get resources during 36 turns, while the best probe endures only 12. Sadly for you I cannot test it propperly and give exact advice, but anyway you can see that stacking mining modules is a good option.

In this other screenshot you can see the incon (in game it is animated) that appears on planets that are being mined in galaxy view: 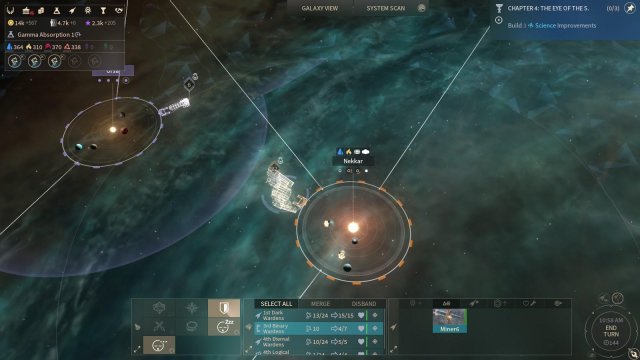 Here, remember that in this case the behemoth can leave this system and the probes will continue granting you resources, until they end their lifespan on the planets are colonized. So another difference from getting resources from special nodes is that in that case you have to park your behemoth, but here you can move to next system with uncolonized planets and place more probes.

Lastly and awful thing that can ahppen: Reasons why you cannot mine resources:

A beginner to moderate guide for those who find Umbral Choir Confusing. They are, but don’t worry. They’re also easy. ContentsGuide to Umbral ChoirGeneral Provisions About the FactionGameplay AffinityFaction MechanicsFaction […]

A guide for the specialised [Protector] sophon ship the “Deka”. ContentsThe DekaAutorepairAnalyzerScoutSiegerInvaderHarrasserDefenderRaiderRepair RigEvaderInfluencerShielder The Deka The Deka is a sophon Protector ship. Protector ships role is to draw fire away […]