An introduction to the games diplomacy system and how trading with other players works.

I’m writing this guide because the game tells you nothing about diplomacy in the beginning and even the Fandom wiki page doesn’t say much about actual trading and how to make use of the diplomacy station. Despite that the first diplomacy station costs only 25 000 credits and is therefore accessible by a lot of new players.

Besides the corporations a diplomacy is the second way of interacting directly with other players. Once you built a diplomacy station and found a partner that has accepted your request you can send ships to each others system. That sounds simple but can be a little bit more complex than it seems. Especially because you must trust your partner very much while trading.

There are no declarations of war or peace agreements or directly sending resources like credits and hydrogen like you may now it from other games. You have to get it yourself. Also, there is no in-game marketplace to trade goods but a bunch of active players have established Discord servers for this purpose (links at the end of this guide).

The Diplomacy Station and Establishing / Cancelling a Diplomatic Relationship

After building it the station can be moved for 2 000 hydrogen per sector. This seems very much in the beginning but is not that much if you advance in the game. With a Diplomacy Station you will be able to receive requests for diplomatic relationship and you can also send requests. You can send requests by accessing the overview for one player where a button “establish diplomatic relationship” should appear. Beware: Currently there is a bug so that you will see this button only when you have “your active view” in your own home system. If it still doesn’t appear make sure, your partner has a Diplomacy Station at all. Sent requests can be cancelled by accessing the detail menu of the station. If you haven’t send any requests and no diplomatic relationship a bunch of randomly selected players will show up in the detail menu. Be careful whom you send a request. Incoming requests will make the Diplomacy Station pulsate and you will receive an Inbox message. You can accept or decline the request.

A.k.a. Trump style. If you want to cancel a diplomatic relationship you can do this every time by accessing your Diplomacy Station. When your partner still has ships in your system and you cancel it his ships will return **without any hydrogen cost** to his system (at his Diplomacy Station). I will later show how to use it to save hydrogen while trading. Your partner will be informed with an Inbox message that you cancelled the relationship.

Doing Each Others Shipments, Farming Hydrogen and Clearing Sectors

Great, you can send ships to your partners system by docking them at the Diplomacy Station and let them jump! But what to do with them?

Most common thing for players of the same level is doing each others shipments. You can pick up and deliver the shipments of your partner like you would do it with your own shipments.The bonuses of Shipment Computer and the value reduction of Offload are applied to the shipments of your partner while all the other bonuses **also** apply to to your commission (not sure, this needs proof!)

The mechanics of Shipment Computer, Shipment Drone and Offload will work like in your system. I recognized that new players are often scared by the credit numbers popping up when they do the shipments so they think they would steal credits from their partner. Reason for the credit popups is simple: While your partner receives the full value of his shipments you will get a 12% commission bonus per shipment. No stealing at all! By doing each others shipments you both will receive a 12% boost on daily income. That’s nice. Level means nearly nothing in Hades Star but if you are worried about your earned experience and level I can tell you that you will still earn the full experience amount if another player does your shipments.

If you want to know how many shipments your partner does for you, open the detail menu of your Diplomacy Station (picture). It will give you an overview what your partner has done in the last week/past. 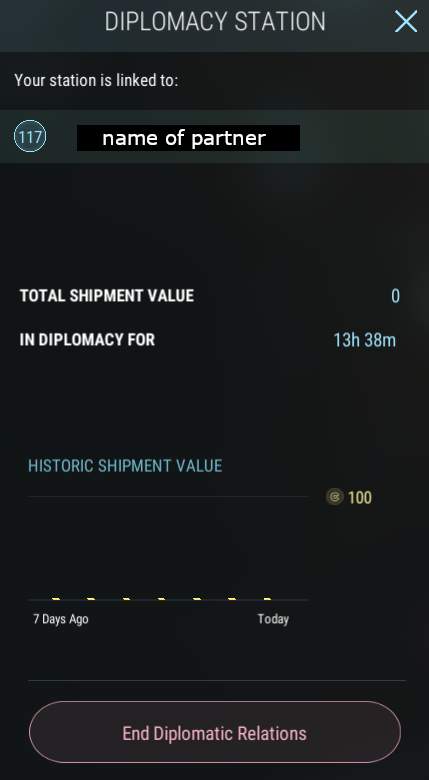 Besides shipments you can also access the hydrogen of your diplomacy partner. If you both agree on this it can be a nice boost to be able to do more Red Stars. Nice and active players will offer to farm their hydro when they are at vacation and won’t play for several days. Mining ships will follow other rules than in your home system while they are at your partners system: They cannot find a planet of yours to deliver so they will stay at a completely mined sector. Same applies to full capacity. So you have to return them manually to the station, deliver to one of your planets and them send them back again or you just use Hydro Upload to transfer hydro directly from your partners system to your virtual storage.

Beside transport and mining ships you can also send an unlimited number of battleships. They won’t fire on anything besides Cerberus forces. You can clear Cerberus ships after your partner has discovered a new sector. This becomes especially useful for discovered Cerberus Stations as new players may not know how to deal with them.

Last and maybe most important chapter for this guide. Sweet artifact trading. You may ask: Why should I buy artifacts if I can also obtain them by doing Red Stars?! Simple answer: Blueprints!

Many players are limited by the number of blueprints they have for a specific module. So they try to get higher level artifacts to get (more) blueprints for one specific module – the higher the level of an artifact the more blueprints it gives for a module (although this is limited). Best examples for this are Sanctuary (blueprints obtained with level 4 Tetrahedrons) and the Omega Rocket (only module that can be obtained by researching level 10 Tetrahedrons). Many players will aim to get at least one blueprint for this module early so they can start research and make use of it. But many will also aim for maximizing blueprints for other modules so they are willing to pay a price for the artifacts. The price often consists of many lower level artifacts, doing shipments for the seller or offer the systems hydrogen. Sellers of artifacts mostly aim at better daily income and additional hydrogen. They will also profit from salvaging lower level artifacts, not needing to do their shipments because the partner does them or accessing more hydrogen so they can run more Red Stars. It’s usually a win-win for both parties.

So, how does one trade artifacts? There are two ways:

Now I think I covered all what’s possible and useful with Hades’ Star diplomacy system. As I mentioned earlier trust is a big factor and long-term relationships are often more beneficial for both sides than short trades.

Once upon a time I had an agreement with another player that was on a lower level than me (I miss you, Lord Helmchen!). It was the time right after I discovered that trading is possible via Red Stars and I was at Red Star level 4, a Red Star level that you can grind very good. So I constantly retrieved more artifacts than I needed but the upgrade to Red Star 5 was far away. What to do with all the artifacts? Salvage? Hell no. I gave some to my corporation mates but I also had an agreement with another friend I met in the game. He took (almost all) excess artifacts and in return he did all my shipments. This was a very good deal for both as he received the 12% shipment bonus and got level 4 arts which he couldn’t get on his own at this time. I was very busy at the time and didn’t manage to login daily but I still could be sure that my shipments were done. Besides that I saved a lot of hydrogen by not doing my shipments. We had a very good relationship until our corp started to fell apart, we changed to different corporations for various reasons and he stopped playing shortly after.

Artifact Trading With A Discord Marketplace

So as I constantly trade my level 7 artifacts for level 9 artifacts let me give you an overview what happens when I trade with another person. First of all I’m collecting a lot of level 7 artifacts at my system (usually around 50-60 or 110-120). Then I offer them at a specific Discord server and try to find a seller that takes them (usually no problem). Part of this offer is the conversion rate, e.g. 4 or 5 level 7 artifacts equal 1 level 9 artifact. There can be different prices for different artifact types and levels. If we both agreed on amount and rate I “free my diplo” (cancel the current diplomatic relationship to be able to receive a new request) so the seller can send me a request or it happens the other way around. Once we established the diplomatic relationship we jump our transport ships into each others system and start picking up the artifacts (location is usually specified beforehand). Depending on the seller you either cancel and re-establish the diplomatic relationship at this point to to do the same again and save hydrogen/time or both partners return their ships through the Diplomacy Station. Sometimes I will even activate my Time Modulator so my partner don’t has to wait the few seconds for his ships to arrive. As the level 9 artifact sellers mostly use my level 7 artifacts to salvage them for credits and additional hydrogen they will bring them to their Research Station. I will store my new level 9 artifacts on a nearby planet/station. Usually I’m the first that finished picking up the artifacts so I wait for my partner to pick up all as well. Once we got all artifacts we thank each other and cancel the diplomatic relationship.

Some answers that newcomers often receive. To your questions, of course. ContentsWelcome to the Hades GalaxyThe Very Fast Money …I Want Fun, I Give Gas!Course Set to New Goal!What Happens […]