Good Old Times is a great Achievement to learn the basics of the game, as it requires switching inheritance, marrying the right persons and keeping an eye on what happens arround you. At the same time, the scope is rather small, as you can concentrate on the area around the North Sea. The scope is still large enough that you need to employ almost all rules the game offers.

1) Start as the Duke of Flanders in the year 769. In that year, all required duchies belong to East Francia, and thus you can combine them completely without having to attack outside your own realm. With some luck, your liege will create an empire (Francia or Holy Roman Empire) and you will not need to fight for your independence at all! 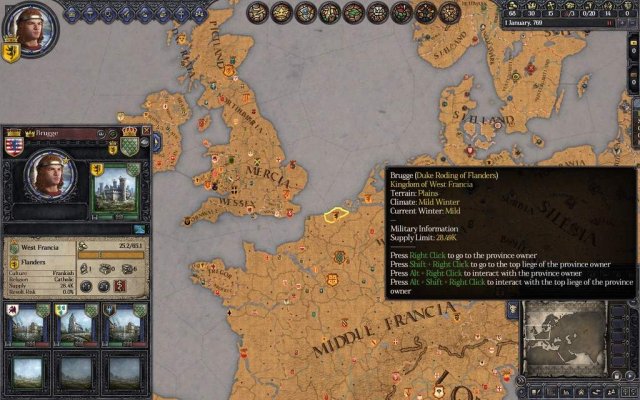 Even though the Duke of Brabant and Holland might look more tempting, because he already holds two required duchies, I found Flanders superior: First, Flanders as a duchy is bigger and offers more holdings. Even with all three other duchies combined, Flanders is a hard nut to crack. Second, you start with gavelkind and thus risks losing the second duchy if you die to early. In Flanders, this is not a problem, as you can always plot to revoke counties within your primary duchy, so loosing a county or two to gavelkind can be easily remedied.

Switch to Dutch as soon as the event fires, as that will prevent peasant revolts and liberation results.

2) Be careful not to marry any of the Lombard princesses. Lombard succession can get rather wonky and you might find yourself suddenly as king of Lombardy, which makes combining all required duchies rather hard, as you do not only have to attack the powerful combined kingdoms of Francia yourself, but also find yourself attacked on de jure claims against your duchies.

There are two suitable candidates available for your duke: Either marry the 26 year old Alpaïde Jerome-Karling from Santois, or betroth the 14 year old Lantsuinda Adalberts from Valais. Both are good choices, cost no prestige, and give you an ally within the kingdom. 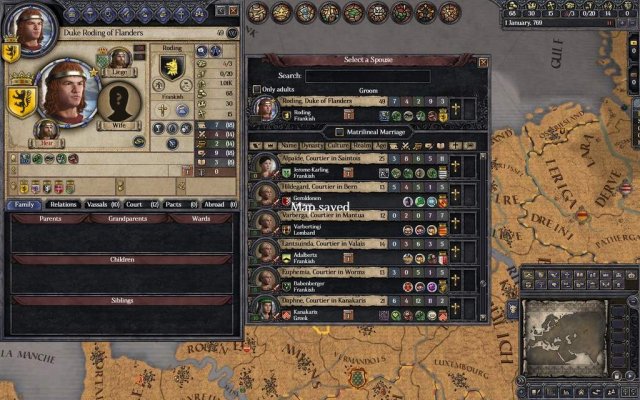 Afterwards, make sure to always marry the siblings of your heir to a close relative of another duke within Francia, to form Non-Aggression Pacts, which can be turned into alliances. For your heir, instead, you should marry him to countesses or duchesses from one of the Frisian counties or duchies. Refrain from gaining far away lands, as that makes the game more difficult.

During the first generation, you lack other members of your dynasty. To increase it and thus make a game over less likely, you should marry your daughters matrilineary. Usually, you will have problems to find a suitable match, but remember that you can invite characters to court to marry them to your daughters.

Do not marry anyone to an emperor level character though. That risks your character inheriting an empire, which will botch your achievement run!

The first law to implement should be Revocations of Titles allowed. Without that law, you cannot revoke titles, which makes your life much, much harder. With the law, you can easily get rid of the count who holds Guines and Boulogne through an intrigue.

Second, you need to switch to another Succession that ensures your titles are never split, like elective or seniority. This requires increasing your Legalism tech to at least 2. I find elective more useful, as you can press claims of dynasts on other Frisian counties and then have them elected as your heir.

As third law, increasing burgher obligations to tax based. Flanders is a coastal duchy, if all holding slots are filled with tax paying cities, you can easily afford even the most expensive mercenaries to fight your war. (As the duke of Flanders alone, I had an income rivalling that of the king of Eastern Francia).

Afterwards, increase Centralization as high as you can. Frisia does not have many vasalls, and you can always give the two weaker duchies of Gelre and Holland to someone else. As those two are de jure part of Frisia, their holders will consider you their rightful king. With a good stewardship and a high centralization, you can easily hold Flanders and Brabant personally.

If you own a duchy title, you can always press de jure claims on that duchy. If you run feudal elective though, having multiple duchies risks loosing some of them upon succession. I only created a second duchy when I needed it for the title Kingdom of Frisia.

Both the duchy of Flanders and Brabant need to exist for the de jure drift to start, so you definitely have to create them before creating Frisia.

Waiting for the Drift

A duchy will drift into a kingdom if the title holder is your Vassal or you yourself. You can see how far a duchy has drifted in the de jure duchies map mode.

This will take 100 years, so make sure you alwas have a strong ally. Otherwise, the king of Eastern Francia will attempt to conquer Brabant and Flanders from you. If you can, swear fealty to an emperor for protection.

You can use this time to carry the fight to the norsemen, which constantly raid you, or to try to gain some of the smaller achievments. Make sure your Vassals like you, so that they pay taxes and provide levies. Keep an eye out for your Vassals heirs, make sure potential female heirs get married matrilineary. You can do that by inventing members from highly prestigious dynasties to your court and offer them for matrilinear marriage to their daughter – a good opinion towards you plus the prestige effects are usually enough to overcome the want a better non-aggression pact modifier.

Do not conquer to much new territory though, maximal two additional duchies: That way, you can give all of your dukes a seat on your council, which prevents them from building a faction. I conquered the Faroe Islands (turned into a merchant republic, to even further boost my income) and Iceland (because they constantly raided me).

If you are a good player, you will probably achieve the whole thing in a couple decades. I needed 250 years, as I am not a very good player and also like to take my time with this game. Once you got this achievement, you will have mastered the basics of the game, and can set your eyes on some more difficult targets with what you learnt.

Do not worry if you fail a couple times. I had this achievement botched for the strangest reason, like my liege pressing my claim on the Byzantine Empire (I still do not understand why he did that, though), or suddenly being elected Holy Roman Emperor and then being to well liked to lose the Emperor title again before the end date of the game.

Crusader Kings II – How to Destroy a Secret Religion / Cult

You will never be poor again. Other Crusader Kings II Guides: How to Destroy a Secret Religion / Cult. How to Get The Good Old Days Achievement. Building Better Badshahs […]