A guide about the best legend in the entire game, hands down.

So, you want to play Isaiah, huh? Well, buckle up kiddo because you’re in the wildest ride of your life with the world’s most interesting legend.

The Down-low of Isaiah

Isaiah is a cannon / blasters legend with 5 strength, 6 dexterity, 7 defense, and 4 speed. Isaiah’s main objective is to combo his opponents to the point where he can then finish them off with a well placed signature. Unfortunately, Isaiah is held back by some terrible hitboxes but with practice they can be negated with skill.

Isaiah benefits from having both a heavy and maneuverable combo weapon that is up and personal with enough power to kill in addition to a long ranged defensive weapon, allowing him to zone his enemies. Together, cannon and blaster make for one of the most unique and fun combinations in the game.

A fairly decent stat spread with all the necessary parts.

Can help secure kills faster with a fairly negligible downside since a majority of his signatures have enough end lag to not make a difference. Light attacks function the about same with no noticeable difference.

Slightly reduces end lag on moves with no noticeable difference with the amount of end lag on his signatures and light combos will perform about the same, just slightly faster. Mostly will get you killed faster with the missing defense.

Increases your defense to make you harder to kill but slows you down to basically a tank crawl. Useful if you need extra survivability.

Speeds up Isaiah to be on par with other legends however to the detriment of strength which will result in kills noticeably not happening when they should.

Also known as the Trash Can™, Isaiah’s cannon is basically the coolest one of the bunch. His signatures cover areas in front of him ranging from above him to below him at precise angles. However, his signatures do not cover directly above him or below him. Overall, his signatures require some foresight in order to get the most effective use out of them.

Neutral Sig: The Best One

Isaiah fires a missile at an upward angle. The missile itself has a hitbox and there is a final resulting explosion which also has a hitbox. If the missile connects with the opponent it will drag the opponent towards the spot where the explosion happens. The final explosion will happen anyway even if the missile does not connect. The hitbox for the explosion also differs when hitting the side of a stage and it will be smaller if it collides with the wall. Be aware: the hitbox of the missile is on the tip of the missile and extends further past it. This sig is not viable as a spammable anti-air tool as the hitboxes are easily avoidable. But it can be used on occasion to catch unprepared opponents that are above you. 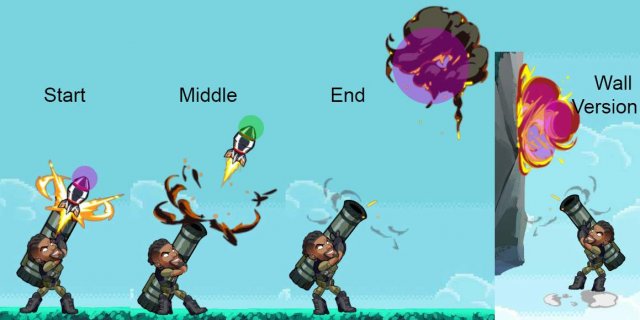 Side Sig: Avoid at all costs

Isaiah holds his cannon like a minigun and slowly starts walking forward with the hitbox extended out in front of him. The move has many active frames and when they connect, Isaiah’s drone will come down and drop a bomb on the opponent. This sig is godawful. The range of the frames and the speed of which Isaiah travels negates any potential use this sig has. Trust me when I say that this move is basically an invitation to lose the match. You can walk off the edge while using this sig but that invites your opponent in for an easy ground pound. The only potential use this sig has if your opponent has literally no mental functions or if somehow they mistime when the sig ends because it really does last longer than you think. If you really want to try to use this sig, attempt to dash away from your opponent and then reverse and do side sig on them to bait them into running into it. 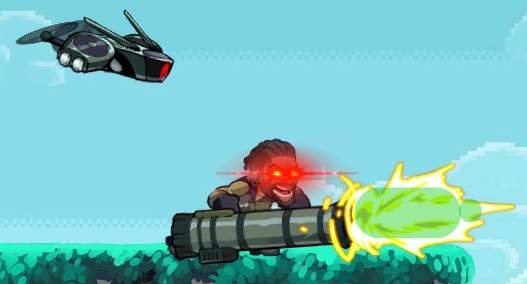 Down Sig: The Actual Best One

Isaiah jumps into the air and grabs onto a tether connected to his drone and aims his cannon downwards as his drone carries him forward, firing a missile at the end. The distance Isaiah travels depends on how long you hold the heavy attack button. The height that Isaiah goes up with his drone is also dependent on how long you hold the attack. Isaiah’s down sig is similar to his neutral sig in that the missile has the same hitbox, will carry the opponent, and ends in an explosion that happens even if the missile hitbox misses. The explosion will spike if the opponent collides with it midair. The missile can also collide with the stage wall with a similar hitbox to neutral sig. This sig is the most versatile as the missile can go below the stage edge and can act as an effective edge guarding tool and the movement from it can allow you to dodge attacks.

Potentially the better half of Isaiah’s combination of weapons, Isaiah’s gun signatures follow his theming of being a specialist by having his signatures all be precise, difficult-to-land hitboxes. However, since they are guns, signatures are an option that you can use among your down lights to side airs or what have you.

Isaiah aims his rifle up into the air at the same angle as cannon neutral sig and fires a quick shot. The hitboxes come out fairly quickly and has a decent reach into the air. The sig consists of a lot of tiny circle hitboxes in a row but it doesn’t matter which one of the circles hit because they deal the same damage and knockback. The hitboxes also don’t last very long so they won’t be catching any unsuspecting fast fallers. Again, this isn’t an effective anti-air due to the end lag of the move and the general size of the hitboxes being too small but it is useful to hit an unsuspecting foe that is above you trying to avoid guns neutral air. 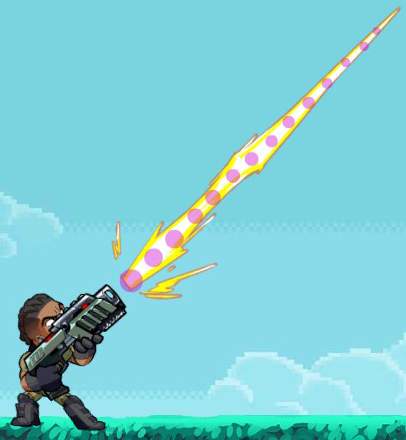 Side Sig: The Bad

Abandon all hope if you ever use this sig. Isaiah’s taser drone will dive bomb an area and taser that area in front of him before Isaiah charges towards that area and fires his rifle directly in front of him in a short range. There are hitboxes on the drone’s tasers as it is coming down towards the ground and if your opponent is caught by them they will be dragged towards the spot the drone stops so that Isaiah can finish the signature. This sounds like it could be a good sig, right? WRONG. The drone’s taser hitboxes are too smal and they don’t cover the area right in front of Isaiah the size of nearly 2 full legend hitboxes stacked edge to edge. Instead they cover a little past that area in front of Isaiah. In order to catch the opponent, the tasers would have to scrape the back edge of the opponent’s hitbox. The hitboxes also move fast enough so that a spot dodge is enough to make the entire sig miss completely. This isn’t even mentioning the awful endlag which basically guarantees a full stock punish. Long story short: never, under any normal circumstance, use this sig. If for some unholy reason you’re still insistent on using this sig, use it only while dash reversing to bait your opponent into running into it.

Down Sig: and The Ugly

Isaiah fires a bullet towards the ground and then holds it to shine a laser target on the ground and then his taser drone follows up by dropping a small bomb at the target. The initial bullet will stun the opponent to allow the bomb to follow up but for some reason the sig can be held to allow the opponent to escape from the bomb. The explosion will happen even if the initial bullet misses. The bomb does have a tiny, tiny hitbox and it will drag down exactly like cannon down sig. The sig overall has short range but it can allow for edge guarding because the aerial version of the move goes below the edge. The sig also has a walled version like Isaiah’s cannon neutral sig and down sig. Despite its general unimposing design, people will sleep on this sig like no other. However, be warned that people will be expecting the edge guard if you just stand on the edge. You can also bait people into running into this sig by dashing away and reversing on them to run into it as you slide back away from them.

Down Light -> Down Air -> Neutral light

Side Light -> Down Air

Down Light / Side Light -> Side Air

Neutral Light -> Side Air / Down Air

Side Air -> Neutral Light / Side Light / Down Light

In conclusion, Isaiah is a legend that requires precise timing and patience to master. Isaiah isn’t a bad legend, he’s just held back by some very unforgiving flaws in his kit. He has good combo potential and kill potential in cannon and good defensive options in guns. If you want to hop on the buff until broken train, now is the time.

Guide to Newbies In this game, there is many different characters you can choose. A great way to start understanding the game, and get good at it, is by watching […]

Brawlhalla – How to Beat Lance

This guide is about on how to beat lance and resort to crying about a weapon that isnt actually broken. Guide to Beat Lance The first way to beat lance […]