An in depth guide on how to play Mercenary, one of the hardest characters in the game.

Have you ever wanted to be an anime character as awesome as Kirito? Slicing through the air, spinning around, comboing attack into attack into attack, charging through hordes of enemies unscathed, somehow never setting foot on the ground? Well now you can! Mercenary is a melee survivor who can effectively fly. He is a decently difficult character that uses invulnerability on his attacks to stay alive. If a fast paced, high skill ceiling, high risk high reward character is what you are looking for, Mercenary is your man. 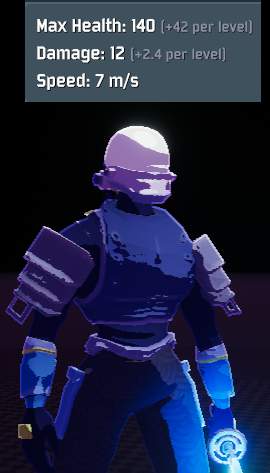 At any point after you finish the last map you will have a chance to find on that says a “Celestial portal appears”. It’ll be next to a teleporter; once you go in the portal and make it to the end you will get the Mercenary.

Base attack speed 1 a second.

At first this move feels awkward to fit in when all your abilities are up all the time and it leaves you really vulnerable to attacks when used alone. However this is a really strong move because it can be animation canceled by any of your abilities. What this means is that if you use it then immediately use another skill you will cancel the attack animation getting the damage off from laser sword while still using the skill. So before you use a skill always use laser sword before it. This however means that by maximizing your damage through animation cancels you will never get off the third attack. The time it takes to get those 3 attacks off, even with high attack speed, isn’t worth it.

This is your main damage tool but it also has mobility applications.

Your bread and butter. If this is on not on cooldown you are either wrong or have 2 Backup Magazines 😛 While on the ground this skill sends you forward. This can cause it to miss it’s second hit on a single target if you are close enough to it so you really only want to use it when you want to close the gap in a little more controlled manner than Blinding Assault or damage a horde of enemies. However when in midair it gives you a short jump and makes it so both hits hit a single target getting that big burst of damage. So if you cancel laser sword with an aerial whirlwind you can do a burst of 530% damage. The only downside to this skill is that it has decent end lag meaning that you can’t act out of it for a while after you use it. This is a time you are vulnerable, can’t move, and time you can’t go into another cancel marking the end of your combo. Something really cool though is that if you get the item Backup Magazine you can cancel a Whirlwind into another Whirlwind.

When on the ground this gives you a brief dash. If you have no mobility items this can be very worth while to do to travel the map quickly. When in air you can use it to keep you there, burn all charges of whirlwind before you jump so that they go on cooldown while you jump. You can get pretty far with whirlwind alone.

This skill can be used for damage, running away, and reaching high areas. It also makes you invulnerable during the dash.

It is important to know that this attack has NO end lag. What this means is that you can use any attack/skill instantly after you reach your destination. This allows you to do you laser sword whirlwind cancel right after Blinding Assault doing a 730% burst. This is actually crazy.

Sometimes you just have to run. A single dash alone can get you pretty far but try to hit an enemy on your way out and 2 is even better. Keep in mind that even while running getting a whirlwind cancel is worth it because it can potentially kill reducing the damage you take while running.

If there is an area you just can’t reach blinding assault has got you covered. Just double jump and dash up to it. If you can hit something along the way you can get even farther. Look at enemies and footstools to leap off of!

In actuality what this does is make you dash then do 7 attacks in 3 seconds. This also has no end lag giving it the same applications as Blinding Assault. It also has the same dash range as blinding assault making it easy to learn. Something important to remember is that in this time you cannot be attacked so when fighting bosses you may want to save it to dodge their big attacks.

You CAN use another charge of Blinding Assault after eviscerate but you have a split second window to do it. If that is what you want to do you need to spam blinding assault and even then sometimes it doesn’t work.

Perhaps the best thing about Eviscerate is that it buys time for cooldowns. Unless you have to use it to stay alive, you should only use it while Whirlwind and Blinding Assault are on cooldown.

Starting with a double jump allows you to attack air units early when blinding assault is down, prevent fall damage if whirlwind is down, and keep up with tankier targets so you can pull your combos on them twice before landing.

People seem to be really scared of fighting air with a melee character. And when you say it out loud it makes sense. However it’s actually really easy! Blinding Assault alone one shots wisps. So if you hit as many as you can with each individual dash you actually clear them better than any other character. Also it’s important to remember that Whirlwind keeps you in the air. If you manage your cooldowns well you can stay in the air for a very long time (forever once you get a Backup Magazine) The same combos that work on ground enemies work on ground. Just let yourself fall a little bit before you use your next Blinding Assault. You also have a double jump allowing you to manage more air time. Once you get good at managing your cooldowns fighting flying enemies actually becomes really fun!

You want to save Eviscerate for their big burst attacks. You can dodge it with a single button press. You can also use a charge of Blinding Assault to get out of the way if Eviscerate is down. If you are in multiplayer you actually have the best trash clear out of all the other survivors so you can be a bigger benefit by killing the little guys and ignoring the boss. Sort of, if you can hit a ton of trash mobs AND the boss there is no reason not to.

This fight sounds intimidating but it is personally my favorite. It becomes super easy once you realize… you can stand on its head. That’s right if you get on top of the Vagrant it is solid land. You use your Blinding Assault to reach it then make sure that after your third dash you land on it’s head and fight like normal.

You know how I said you are invulnerable during your dash? It comes in handy here. When he’s using his black hole and sucking up all the trash you just jump in and combo inside of him. You have so much AoE that him putting all the adds in once clumped ball makes the fight SUPER easy.

Another scary looking fight that you should handle with ease! Every segment of the magma worm is a hitbox. This means that if you whirlwind inside of it or blinding assault straight up through it, you are going to deal CRAZY damage. Any AoE ability demolishes the guy and lucky for you, everything you have except for eviscerate is AoE.

I briefly went over some of the combos in each section but here I am going to go into every single one. Keep in mind that every one of these can be started with Laser Sword and you can always (and should always if it’s up exception being in air when you need it to stay afloat) follow any skill up with Whirlwind.

Blinding Assault into Laser Sword
Blinding Sword (~330% damage)
BA+LS
If you don’t mix in anything else and do this 3 times the string looks like this
BA+LS+BA+LS+BA+LS
Remember that after any laser sword you can whirlwind. While there is some end lag, it’s more important to get the damage from whirlwind out then have an endless chain. Whirlwind should always be on cooldown.

Blinding Sword into Eviscerate
Only do this on your last BA or you can loose damage.
(2160% damage)
BA+LS+W+LS+E+LS+W

I am separating this into tiers going from top to bottom and talking about how every item works with Mercenary. The higher tiers are what in multiplayer you absolutely need to get early and in single player what you should pick if you have a 3D printer or option of 3. As they get lower they are better to pass up and give your teammates and a lower priority for your personal selection. I also want to make a disclaimer on legendary items: EVERYONE WANTS THEM. Communicate if one drops and spread the wealth. Unless you are playing with douchey randoms who aren’t showing you the same respect, be a good person.

These are not bad items on you (in singleplayer there is no such thing as a bad item) but they aren’t particularly important either.

These are items you don’t need to worry yourself with. Just pass them off to someone else who can use them more. And if they don’t want them just take it without a second thought. Keep in mind in singleplayer there are no bad items so if it was from a chest or shrine its not a terrible thing. A buff is a buff. But don’t consciously pick them until you are solid on everything else.

An in-depth guide on the first survivor in the game. Other Risk of Rain 2 Guides: How to Unlock All Characters. Beginner’s Guide (Tips and Tricks). Altar of Gold, Gilded […]

This guide was created just to help those who don’t know how to unlock the new survivor from 1.0 update. The Most Simple Step The only thing you have to […]

Risk of Rain 2 – How to Be Invincible with Mercenary (Update 1.0)

With the release of V1.0 a new item allows Mercenary (and some others) to be completely broken with just a few stacks. Guide to Be Invincible with Mercenary It’s That […]