This is simply a collection of loadouts for people who are new to the game, or just want to try out some different playstyles they might not have considered.

Here, I will describe a series of loadouts to help new or “lost” players along their way.
Starting off, you are given the option of doing the tutorial, and I highly suggest doing that. The gold reward is well worth it, as well as getting a primer on basic knowledge of the games many mechanics.

Afterwards, you have three game modes to pick from, with the focus of the guide being Frontline.

However, in order to build these classes, you will need to have gold to have access to these equipment sets. You are given a number of pre-made classes that are free to use (But not customize) in frontline, and while these are reasonably fun, the ability to make your own classes and loadouts is likely (If you are anything like me) a huge draw and possibly one the reasons you purchased the game.

I am not here to claim that these are “fantastical” loadouts that will make you win battles you would otherwise lose. This is not a “tier list”, or a rating system to suggest that these loadouts are better or worse than any other loadouts. What will work best for you is a class of your own design, with weapons and armor and equipment and perks that suit your own personal playstyle. These are simply starter templates so that if you are stuck, you might find something that piques your interest.

That being said, thank you for your time, and I hope you find something fun here. I will post both the loadouts of their equipment and perks, as well as a general “guideline playstyle” in which I personally use these loadouts. This is not to say that this is the ONLY way these loadouts could be used, or that they are the best for the situations in which I use them. I cannot stress enough that this is all just meant just to be a “nudge” for new players or those lost in the breadth of options.

16 Points.
16 points, and so many ways to spend them. Armor, Weapons, Throwables, Healing items, Building items…the number of combinations can feel endless and overwhelming.

Fear not, for those of you suffering from “Choice Overload”, I’ve come up with a few different tried and true loadouts.

So for example, you would read 1/2/2 as “Light head armor, Medium torso armor, Medium Leg armor”. Since all armors are equal to all others of the same rating, it doesn’t matter which specific armor piece you choose as long as it’s in the same armor rating.

Now that all that is out of the way, lets get cracking!

This class favors flanking and a well rounded approach to combat. The rapier allows you to keep up with faster weapons while being able to output enough damage to deal with medium armored enemies in a reasonable amount of time. Stabs to the face of unarmored enemies will immediately kill them, and it only takes three to kill someone wearing heavy armor. For a 4 point weapon, it will give you quite the bang for your buck. The recurve bow is useful for short and medium range shots, meaning you can use this class for aggressive plays easily, either by taking pot-shots while kiting heavier armored foes, or picking off lighter armored enemies with headshots at close range. Keep in mind that ranged attacks will NOT prevent someone from swinging at you, so if they are moving into striking range and you are unsure if your next shot will kill them, switch to your rapier and prepare to parry. The recurve bow sports a large pool of ammo, so you can also use this class to play a defensive tower-guard, pelting enemies with constant shots at choke points or by firing into large groups. The fire bomb is useful for getaways, creating choke points, or splitting up large groups of enemies. It’s hard to find a time when a fire-bomb ISN’T useful. The only time you shouldn’t really be throwing them around is when it will block off your own escape, or when it would cause a stall in an allied push. Don’t throw them around choke points when you are on the attack, as it can buy the enemy time to fortify their position.

The Squire is a front-line fighter with all light armor that is intended to be played as a support fighter, using his speed and range to team up with other players who are using heavier equipment. His throwing axes are used to pick off short-range archers or to weaken incoming foes before using his spears range to buy time and openings for the heavy hitters to finish the job. You aren’t looking to steal kills, but rather to ensure the kills go smoothly. This loadout works best if you can play in a party and work as a coordinated team with your “Lord”. The spear’s stabbing range and power shouldn’t be underestimated, but beware when trying to use slashing attacks with it, as it’s range can often get caught on allies to your sides. This class loadout can help you get used to playing more carefully, and also teach you to work as a team with staggered strikes. On it’s own however, the squire isn’t built for taking on multiple enemies at once, and will get struck down quickly if he gets singled out. 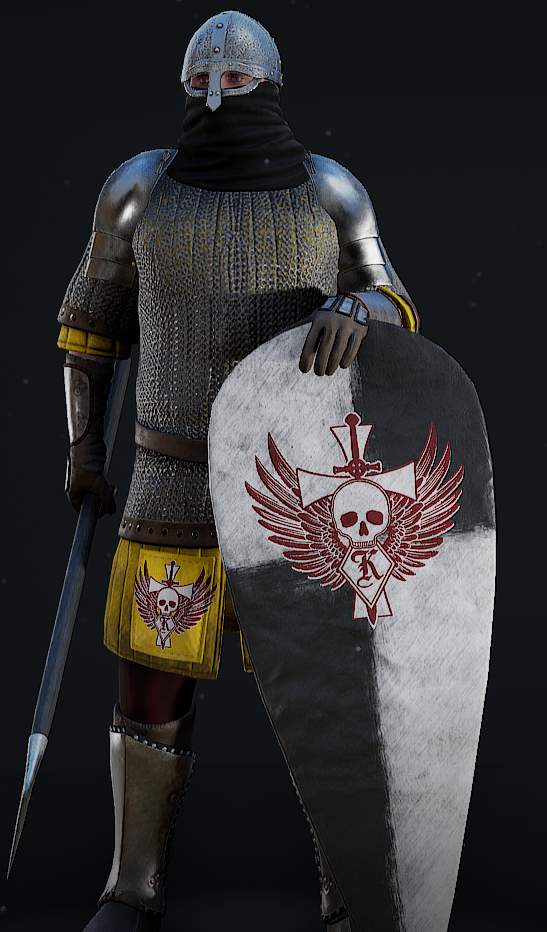 This class is my go-to when I first join a game of frontline. Since it uses medium armor, and makes use of a shield and stabbing weapon, it makes for a solid loadout for any situation. You can use it when pushing objectives, defending objectives, flanking or just going for a killing spree. The short spear trades the damage of its full-size counterpart for having more speed overall, and since you can use it together with the Kite shield, you can deal with multiple enemies easier. Shields allow you to block multiple strikes that are staggered, but prevent you from preforming the counter mechanic explained in the tutorial (Riposte). This means that you’ll need to play carefully and preferably with your team. Straying too far can make you an easy target to be singled out and rushed. That’s where the firebombs come in handy. They can be used to give yourself breathing space, or to force enemies into an encounter with you by blocking off their escape routes. Just keep in mind that since you are using a spear, stabs will be expected and overusing them will cause smart enemies to chamber your attacks, getting in free stabs on you if you become predictable, but you can also use this to your advantage, and try to fake enemies into stabbing so that you can chamber THEIR stabs in return. A mind-game heavy loadout, it’s balanced for just about any sort of encounter, but isn’t going to excel at any specific encounters either. Faster enemies might kite you or barrage you with dozens of light strikes, preventing you from attacking. Heavier armed enemies might force you to go on the offensive and try to finish you in one or two strikes. Its your job to read the enemies intentions and make use of that information with fakes, morphs, and working with your allies to maintain the tempo in your favor. 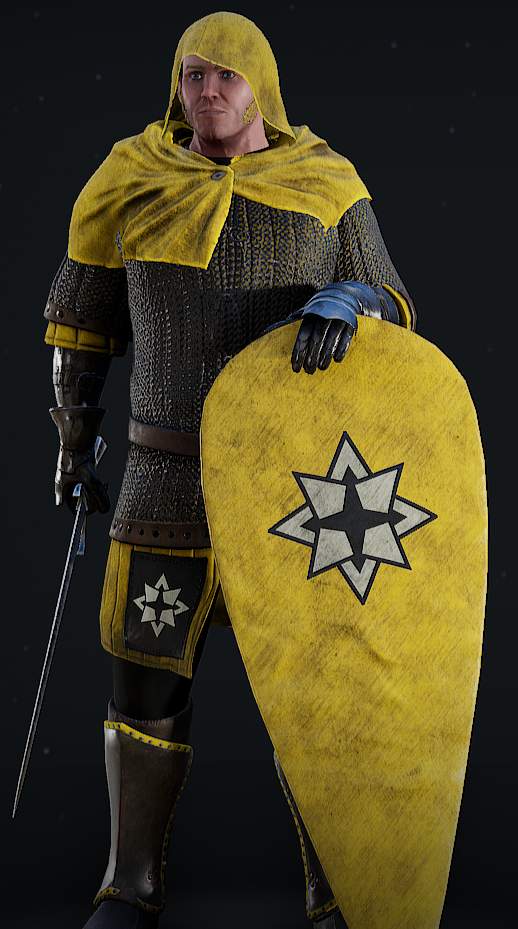 The Quartermaster is great for defensive play, or working in tight-knit squads with friends. Sporting a bastard sword means you have a one handed mode for using in tandem with your shield, and you can also switch to a two-handed grip to have access to your parry and deal more damage overall. Its an overall great weapon to pick up at the start of your journey of learning the game, since it effectively gives you two weapons for the price of one. In tandem with the kite shield, you’ve got a swift strike, a solid defense, and a generally fair fight against all sorts of weapons. You won’t feel as limited as you might with a short spear or rapier since your slashing attacks are as effective as your stabs, so you’re less likely to be easily read and have your attacks chambered. the reason I mentioned that this class is good for defensive play is due to the medical bag, as well as his perks. He excels at covering allies while they recover health using his medical bag. By using it, you drop it on the floor like a multi-use consumable that allows players to heal by interacting with it. Since you heal on your own faster than someone without the Tenacious perk, you won’t have as much need for it (though you certainly can use it yourself in a pinch.). if you can work to protect a siege engineer to set up forward bases to make outposts for allies to gather at during their assault, you can make game changing supportive plays, while not being so lightly armed that you end up feeling like a wet-nurse.

Are you new to the game and you don’t know what Builds you should make? Then this is the guide for you! ContentsBeginner Build GuideIntroductionUtility BuildsBeginner Friendly BuildsHonorable Mentions Beginner […]

This guide will teach you how to expertly use the objectively strongest weapon in the game, the beartrap. Other MORDHAU Guides: Advanced Guide. FAQ: Everything You Need to Know. How […]

MORDHAU – How to Create an Autoexec

This guide will teach you how to set up console commands to automatically apply when the game is launched. Much like CSGO’s Autoexec.cfg system. This is useful for those who […]