This guide mainly shows how to get Godlike achievement but in this way you can also earn Unstoppable and Dominating achievements too!

I found out a good and relatively easy way to obtain Godlike achievement. In this way you can also unlock Unstoppable and Dominating but it will take more time and attempts.

You need to start a game versus bots on Capture the Flag on Citadel map by selecting Practice (Play Humans vs Bots) > Capture The Flag. I think it’s easier to unlock this achievements playing with bots, instead of public games with humans but on the other hand sometimes bots are really annoying and unpredictable. 30 kills without dying isn’t maybe easy thing to do even playing versus bots but it’s possible 🙂

When a match start, quickly loot all weapons and armor you need (i mostly used lightning gun and super shotgun) and try to stay in your base, defending your own flag and killing every enemy that come to steal it. Bots should come from main jump pad but in rare situations they can use second one, so keep an eye on it. Play carefully and try don’t rush too much, because bots sometimes can easily kill you in open area. You can also try run for Quad Damage/Protection near your base, when it spawn and maybe rush a little when you have it. On the end of match you should had around 40-50 kills or maybe even more.

When you get 5 Rampage medals you can start doing Frenzy and Rage medals. In one match you can obtain 2 Frenzy medals, just get 20 kills, then die, and then start doing next 20 kills.

This is place where I tried to stood for most of time and from where most enemies came: 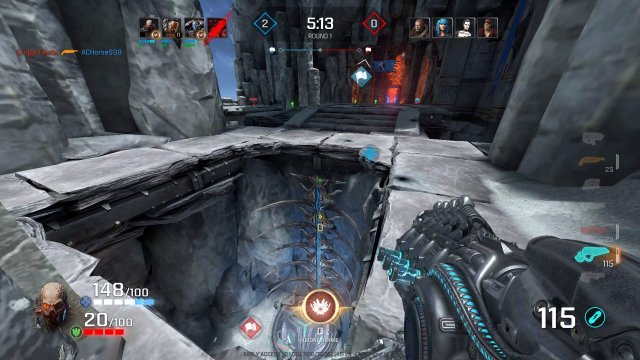 Team Deathmatch requires more understanding of the game than regular deathmatch. No one likes to carry a feeder. If you don’t want to be a burden to your team but […]

Super short guide explaining time needed to unlock Champions in QuakeChamps without paying for them. ContentsResultFavorPlatinumCalculations Result 1 month to buy 1 Champ with Favor. 2 months to buy 1 […]