A guide that will hopefully get you started on your Vault as a young Overseer along with basic information on Rooms and tips on surviving out the wasteland!

Hey there! Is no one selling to you because you’re trying to give the actual hard earned money you stole from the elderly couple down the street? Well here’s what you gotta do!

In this game (as of most Fallout games) the in-game currency are Caps. Caps are used to build and upgrade building’s.

You eventually might realise…why are we using Caps? Well they….uhh..use them because….uhh…Hey! How are we supposed to know?

Note: Each time you purchase a new room the room gets more and more expensive to build!

Nuka Cola Quantum is a purchasable (with real money only) item that can be used to speed up and skip quests/tasks/objectives. You can also get these from objectives and quests ect.

Sure they come in handy if you’re the impatient type but they’re obviously not needed nor required. You will get 15 of these when you get the “Overseer’s Office”.

We all want to be safe from raiders, bugs and deathclaws, right? So here’s a few things that will help you survive the fallout 😉

Note: Killing raiders will reward you in weapons, armor, outfits and caps. Just click on their bodies!

After you get a Female dweller you have to wait what seems like an eternity to get the baby and THEN have to wait another thousnd years for it to grow UP!

Defenetly worth until you get the Radio Station.

Living Quarters are what you need to upgrade / construct to get more dwellers in your vault!
So make sure you have them Maxed out!

Rooms run on POWER which means you need to have power all the time!
If you don’t have POWER you are basiclly screwed! No POWER = No food / Water

Alright, we got that out of the way. Now. You got a vault, you got over the tutorial. What do you do?
Make a 2 blocks wide generator room and assign at least 2 dwellers! No matter what 2 dwellers are requierd for the minimum power (For the starting phase)!

All dandy’ so far ye? Good!

Power is no joke… Power is the blood that runs trough your vault!

Good ol’ food. A key to survival none-the-less. Maintaining food is rather easy if you have a general idea on what you are doing! So this is why you are reading this thread, i guess?

Ah, yes. Waterfalls, Fountains, Rivers… too bad they are gone!
But hey, you can purify it with the room known as “Water Treatment Room”.
A wise choiche for a thirsty fellow like you!

When it comes to water it’s pretty easy to keep at a high level like food! Water is vital to your dwellers as they are 69% Water 1% Rad 30% Flesh and Bones, right?

The Medbay, although not crucial, very useful.

The Medbay recuires “I” (Intelligence) to produce “Stimpacks” (Health Items) that can be used in defense and scavenging mode.

Something that can help you big time is upgrading your Medbay by one level, this will then turn it into a “Clinic”. They will produce 2 Stimpacks at a time.

If you have a dweller who has a high “I” skill it would be wise to put them on the Medbay to create Stimpacks.
Intelligence can be trained with Classroom.

Note: Stimpacks take app. 10 minutes or higher to produce so don’t expect them to pop out so easily. But the production can pe sped up by trainings your dweller’s intelligence and having more in the same room. 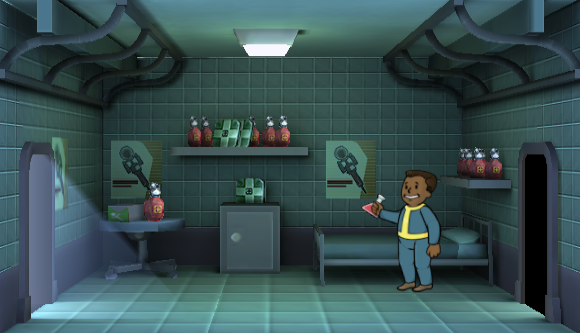 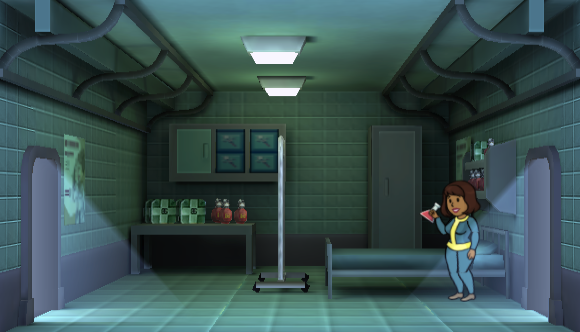 Before the Nuke most people would have been saying “Did you have your shower Timmy?”
Now…”Timmy if you don’t have any radaways after going outside you’re getting thrown out” No…Just me?…Ok…

While the Science lab is very similar to the Medbay in terms of skill (intelligence), it is WAY different in terms of production.

Tip: If you click on a dweller and you see red in the health bar…GET THE SCIENCE LAB UP AND RUNNING MAN!

Radiation can be gotten from going out into the wasteland, so if you have a lot of scavengers then I’d keep them in stock 😉

Have you ever said to yourself “I need more weapons” or “I need more Money” or even “I NEED MORE CLOTHES!!!”? Well this section’s for you!

When you send dweller you will see dialouge from the dweller on it’s journey, so basically if you’re bored, you can read it.

Also give your dwellers Stimpacks, Radaways and Weapons with them on their journey, we didn’t say it was safe outside now did we?

Tip: Check on the exploring dweller by clicking the outside the shelter or by pressing the gear on the top right of your screen.

Now the Overseer’s Office is VERY useful and introduces “Nuka Cola Quantum” (Speeds up game)
This building allows you to go to buildings and do quests for different rewards.
This is a WAY better method than just letting your dweller wander around the place picking up 2 caps every 10 minuites and the ocasional BB-Gun.

Ugh, it sure gets boring constantly turning this wheel around over, and over and..what was I talking about again? Hey! A Radio Station! Let’s listen to some tunes! Oh wait, we’re the radio station…MAN LIFE SUCKS

The Radio Station is an important part of the the game later on as dwellers are a lot less likely to arrive to your vault. The radio stations main purpose is too bring dwellers into your vault.

Depending on the C (Charisma) that your dwellers have running the joint It can take up to 1-4/5 hoursish. And you might be like..”Wow, I can get a new dweller that often! Nope my good sir, you see there is a chance that your dwellers got on to another dweller so if you’re watching that timer, don’t expect to see a new dweller pop out EVERY time, and you will have to press on The Radio Station once a dweller received the message to prevent dwellers from stacking up overnight or just letting the game run without you checking on it. Alright? Good 😉

Note: Most dwellers skill levels are usually poor with their max usually being 2, so don’t expect any INSANE skill on them newcomers.

But hey! The radio station has a small switch you may never used or intend to. That, when being switched from left to right will boost your Vault’s overall happiness which is graded at the end of every day for CAPS as a reward. They are not initially too big but as you grow you get more and more Caps!

We have all been there, a room randomly burstend into flames, or the coacroaches decided to attack back! But there are other dangers out there too, some deadlier than others!
So here’s a list with the events and how to take care of them!

A misterious dweller can appear in random spots in your vault with a piano tune alerting you about his presence. Clicking on him you can gain 50-Unknown Caps (Depends on vault size).

When a room catches on fire you will have to put it out QUICK or it will spread to other rooms! (Luckly it won’t destroy the rooms, it will just damage your dwellers).

These nasty pests will invade a random room at random times. They will spread if they are not dealt with quickly! They just damage the dwellers so make sure they all have at least 1 gun per room!

These gentlemen attack coming from the wasteland first hitting the door, so make sure you have at least 1 powerfull dweller guarding the Vault Door or 2 dwellers (They obviously need to have guns!).

Resources that flash red are slowly draining as they are stealing them!

After a raider dies click his body to retrive caps, armor, weapons or junk.

You might aswell just say your prayers because they will rip your vault into pieces! These unstoppable mutants are every Overseer’s worst nightmare! Only a fatboy could stop these monsters!

The zombies stronger, uglier and faster cousin, the Ghouls will attack similar to raiders but will have a way bigger impact! They will attack the door, similar to the raiders but when broken down will inflict A LOT more damage and will give your dwellers radiation, so pack those Rad-aways! They go room to room a lot faster though so if your dwellers are at full health there’s not much to worry about.

Sometimes when you have alot of dwellers ~50 2 characters will visit your vault and perform dances randomly. Click on them while dancing to recive CAPS and Nuka-Cola Quantum
Cappy.

All the training rooms have the same purpose, to train your skills (S.P.E.C.I.A.L Stats). There are several training rooms and here’s a list of most, if not all of them:

Although (depending on the skill level) it takes awhile to upgrade but it sure is worth it!

Note: The time it will take to upgrade will depend on the dwellers skill stat at that time, so having one won’t take too long but having 9 will take a good bit longer.

Hint: Try and train new dwellers instead of sending them to a room, it will mean that the dweller will be better at their job so you can get resources faster, but train him just for that room requierment as it takes quite a while to train them (unless you got Nuka-Cola Quantum to spare for the training).

In this guide, you find useful tips that you can utilize in your Fallout Shelter quests! Other Fallout Shelter Guides: Ultimate Guide. 100% Achievement Guide. Quick Guide to Getting Started. […]

Fallout Shelter – How to Attract Residents

In this guide, I will show you how you can attract new residents to Fallout Shelter. ContentsGuide to Attract ResidentsFirst Method: PregnancySecond Method: Radio StudioThird Method: Lunch Boxes Guide to […]

Learn how each S.P.E.C.I.A.L stat helps your dwellers while exploring outside the vault. ContentsDisclaimerStrengthPerceptionEnduranceCharismaIntelligenceAgilityLuck Disclaimer All of the information within this guide has come from the Fallout Shelter Wiki and […]