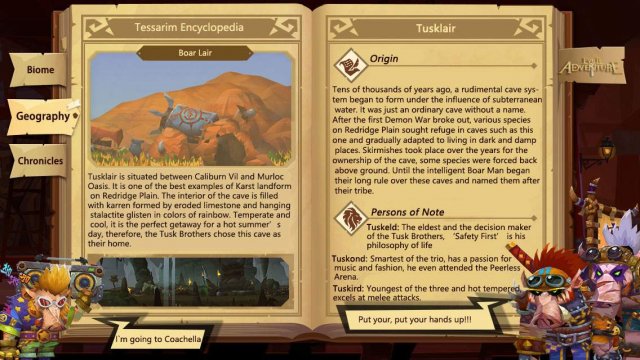 Tusklair is situated between Caliburn Vil and Murloc Oasis. It is one of the best examples of Karst landform on Redridge Plain. The interior of the cave is filled with karren formed by eroded limestone and hanging stalactite glisten in colors of rainbow. Temperate and cool, it is the perfect getaway for a hot summer’s day, therefore, the Tusk Brothers chose this cave as their home.

Prehistoric: Tens of thousands of years ago, a rudimental cave system began to form under the influence of subterranean water. It was just an ordinary cave without a name.

Past: After the first Demon War broke out, various species on Redridge Plain sought refuge in caves such as this one and gradually adapted to living in dark and damp places.

Present: Skirmishes took place over the years for the ownership of the cave, some species were forced back above ground. Until the intelligent Boar Man began their long rule over these caves and named them after their tribe.