This is almost a port from my last Gaige build for OP8, except i used the new skill points and got a few more options. This build is made particularly for mobbing and I have completed the peak numerous times with ease.

What This Build is About

This build is based on kill momentum, so basically you will be wanting to kill all the mobs in quick succession for your best performance. With “Anarchy” you will be getting a large damage buff and “blood soaked shields” giving you the ability to shield tank. The build is very good all around for mobbing activities. 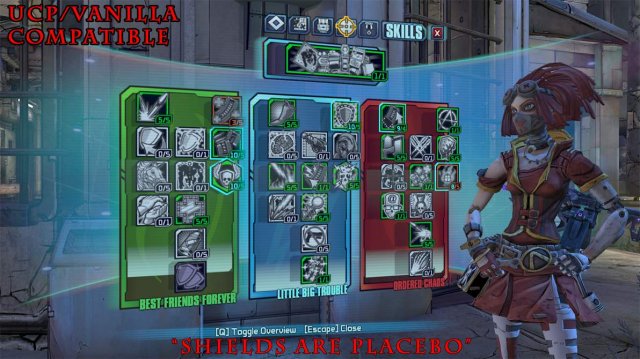 Some skills might seem a bit odd, mist likely it’s due to me making this build with the community patch in mind.

This is pretty much a no brainer when playing gaige, most of her builds rely on this very heavily. Who can say no to 700% gun damage?

This is how i can manage to keep my gigantic shield on at most times and where my bulk comes from. Only thing is you gotta keep killing stuff for the filled shield, which honestly isn’t very hard with anarchy buff on the powerful weapons this build uses.

Because you obviously aren’t gonna hit every time with the anarchy accuracy loss, lmao.

Made of sterner stuff

In the vanilla game i don’t know if this would be worth five kill points, but in the UCP it will reward you with 20% damage reduction from all sources which is a fair bit when stacked with the large shield capacity not to mention just effectively increasing your health as well. Also gives DT 15% melee damage.

This will give us a 60% resistance to electric damage on our shield as well as increasing it by 30%, no downside just really good for this.

When using the UCP you will get 25% electric damage. Which is really nice considering not many enemies are resistant to electric damage and it so happens our main weapon is electric. 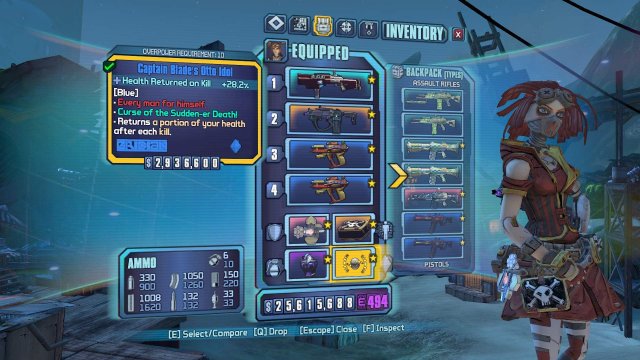 Usually i will run an electric butcher, it performs well at any amount of anarchy but really starts being a damage hose at around 70-100. I used to run a Twister here usually but this will perform better at higher anarchy in my opinion due to the ability to just spam this and get ammo back on shots. You might say i’m stupid for not running a conference call here but it uses way too much ammo for mobbing. Pretty much any good electric weapon will work well here, recently i’ve found the peak cleaner to be nice here as well.

I use the slagga here because it make thing do the big damage. This is a really good weapon with it’s high rate of fire and pellet count. Another thing to take into account is smg’s have the second highest swap speed behind pistols.

Best thing for these would be dual fire/corrosive fibbers or hails but i usually run the fibbers due to the huge damage. These spots round out the build for when something is electric resistant.

This is a turtle shield in disguise, it has a gigantic base capacity along with a passive 37% damage resistance which will stack with “made of sterner stuff” (also contrary to popular belief parts don’t effect the resistance and the effect is always active unlike the card says.) Otherwise you can run an antagonist but it will not tank nearly as well.

Captain Blade’s Otto Idol,sometimes you’ll be killing so many things that you kill yourself with blood soaked shield so counteracting that and also giving some health regend. It will slightly decrease FFYL time but it’s irrelevant.

Just to boost some really nice skills and damage buff. Generally just good, nothing else to say.

I run a longbow slag transfusion particularly for when things get too heated and need quick health.

Borderlands 2 – Cult of the Vault Guide: All Vault Symbols Locations

With maps and video. All Vault Symbols locations in all regions in Borderlands 2: Commander Lilith & the Fight for Sanctuary DLC. Note: the exact location of each symbol on […]