The Dantalion mission is the last job you have to do for the Peacekeepers, and is a part of the endgame. However, I noticed the Swansong boss fight is a lot more difficult than people need it to be. In this guide, I’ll show you how to make the boss fight more manageable.

I’m assuming, for the sake of the guide, you already got through all of the Peacekeeper jobs up until the Dantalion job. This one isn’t like the previous missions, where you fly to a planet or a hostile ship and fight your way through. It’s treated like the other story mode missions, where you talk to S.A.I.L. to get to the ship. Before we actually get there, we should get set up.

This is the kit that I found works rather well against this boss, and would like to hear what else works.

The map is rather simple and straightforward; it’s just like most story missions where you shoot your way through enemies and interact with switches and consoles. The only difference is the fact that your mech is the only way to make meaningful progress through the space portions of the map.

There’s also the fact that there seems to be only two pieces of dungeon specific loot, being the cult general helm and the tentacle backpack that you find midway through the map.

After Asra Nox stops talking, circle strafe to avoid the micro missiles that are sent your way. They aren’t much of a threat as long as you keep moving. Whenever gravity is engaged, fire everything at the Swansong. A siren will sound before gravity switches, so use this time to either get into the mech and use the spike ball, or get in the mech and unload everything. Don’t even bother with the disk things that she spawns. (You will use them later on, after phase I is done) Even though the disks do make a web that will shred the mech, they don’t account for the spike ball tech and will let you slip through.

The attacks will start off being used one at a time, but after 1/3 of the health bar is chipped off, they will come in twos. 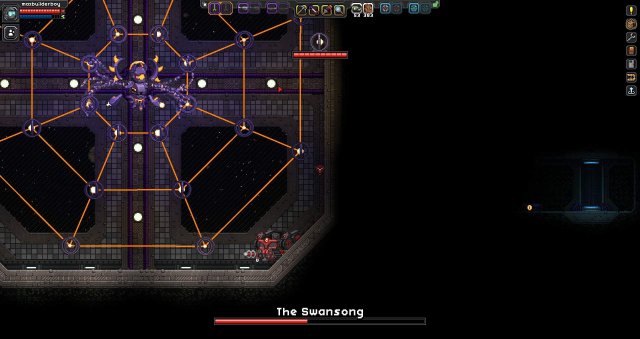 Keep going in one direction until the missiles stop flying. There’s not much else to say about this attack. 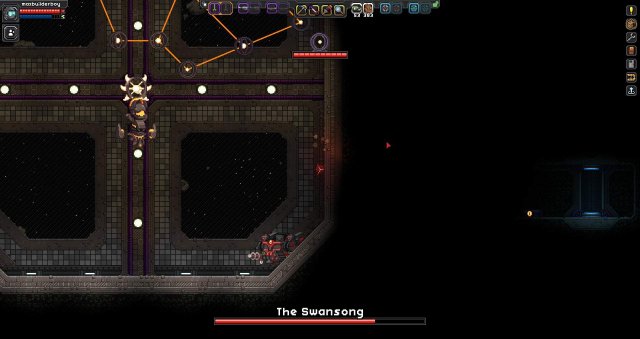 The beam will normally adjust for your trajectory. In the spike ball, these are easier to avoid. You could even stay still and move only when the beam lock onto you. The move itself isn’t too bad once you get a nice rhythm down. 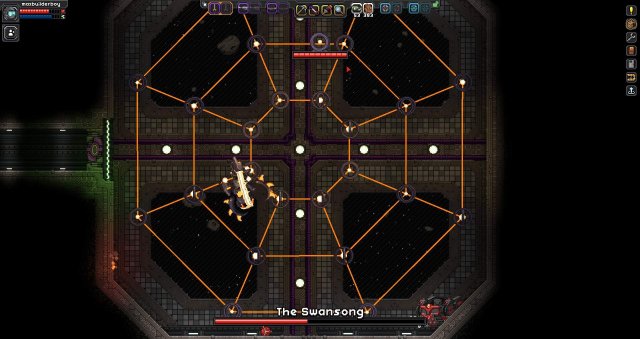 This is the only attack that may cause some difficulty. The attack, like the Solar Beam, is adjusted for your trajectory. However, each strike will leave a scorch mark that can cause damage and unlatch you from the wall. If you are too close, the katana will try and swat you off the wall to, so keeping distance will be the key for this one, and make sure the strike is committed before you backtrack.

If you get to this part, the only thing you will need to worry about is getting the energy capsules for your mech and landing to hook onto the wall. The attack in this part of the fight is just a bunch of Solar Beams aimed at random. Just sit tight, move when the beams are locked on you, and you should get out without a scratch.

The rest of the fight from here on out will be against a bunch of Solus Katana attacks. They will mostly be the strikes you have been against in the first part, as well as close up swipes. The only new thing the boss will do is, rarely, do a lunge across the arena. The boss will also start teleporting more, so keep an eye out for wherever the Swansong is and is should be over soon.

Congrats, that’s it. You beat one of the toughest challenges the vanilla game can provide. Now, get that chest and reap the rewards. You can expect a shield, a diamond, a random amount of treasures, and a tech card to be in the chest along side the main prize, the Solus Katana. 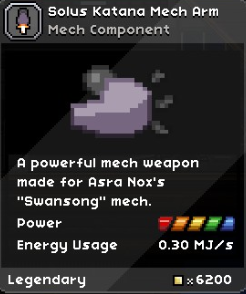 The Katana is a melee option for your mech that will act as the quick lunge you know from the fight. It’s the only weapon part currently available that has a power rating of five, so it seems pretty good. Now head back to your partner Noble and watch Asra slouch around in a jail cell as the final cutscene you have to watch in this game.

Honestly, though. Just a melee option? I would’ve loved to have some of the other parts, like the lockon missiles or the beam, even the chassis. The Katana isn’t even that powerful, to be honest. The only use I see in it is a second jump.

Have you tried joining a server and failed with some error you don’t know how to fix? Or have you ever been randomly disconnected out of nowhere? Well here is […]

Starbound – How to Defeat the Erchius Horror