Hello. Since this game doesn’t offer any manual saves it can get tricky to get 100% achievements in one go. Also since there isn’t any way to skip dialogue it starts getting kinda annoying also if you miss one.

How to Manual Save

You can manual save by going to:

There is a file and a folder. The file is your save file. When you enter a room sometimes it autosaves. You must copy this file elsewhere since the game overwrites this file constantly. To reload you need to replace the file you saved and restart the game. Thanks Microids.

These achievements are gained just by playing the game.

This sure ain’t Kansas

You came round in a really strange institution…

You managed to leave the clinic’s psychiatric ward.

No time to lose!

You fled the clinic and saved the tribe from great peril.

You’ve reached Valsembor despite your pursuer… and the red tape!

You and the Youkols can count on new allies in Valsembor.

Your efforts have restored a mechanical masterpiece to working order.

You took the plunge for the good of the migration…

Colonel, are you receiving me? Over.

You showed the soldiers that cunning is always better than force.

You enabled the Youkol migration to set off again.

The redemption of a great sailor saved you from a legendary assailant.

You took the advice of an injured ally.

The Community of the ostrich

Your alliance with an automaton and the tribe has let you move mountains… Or a ferry, at any rate.

I is somebody else

Admit it: you didn’t see that one coming…

What counts is not the destination…

You’ve completed this part of your journey… But what does the future hold in store for you?

These achievements can be missed.

Time to collect your thoughts

Listen to Kate’s thoughts during a conversation.

One flew over the nut-job’s nest

During the interview don’t lie and say only half truth.

You call that cheating…?

Find 15 points on interest in items in your inventory. Keep inspecting items and finding clickable points.

Become friends with two of the clinics old hands.

Speak with the two guys playing chess in the ward and get them to help you with the key after you find out it doesn’t work.

Tell one of your traveling companions how much you like them three times.

This is an achievement that spans all game. The goal is to pet a certain ostrich three times throughout the game. First time you can pet it when you arrive in the big hut with the market, second time when you return to the hut at night after the Yukols packed the goods and third time late in game at the Yukol camp.

While exploring, perform 5 optional actions that influence your progress.

Another game wide achievement. You need to explore and know things before needing them. Stuff like reading the Captains diary before trying to convince him, or speaking to Kurk about bribing the watchman before talking to the watchman. I received this achievement during the bridge crossing. You need to do 5 of these action.

Find out about the region’s dark past.

Read Obo’s journal before going to Steiner. You can find the journal at the top level of the ship, on a table.

On the first try, you succeeded in convincing a lost soul to seek redemption by helping you.

Convince Obo on the first try. First conversation [Hedge], [Push], [Argue] doesn’t count, only the one after him sobering up. Make sure to read his diary located on top level of the ship before. Order is [Coax]>Valsembor needs you>I offer redemption (read the logbook first).

During a discussion, use an irrefutable argument that you obtained by exploring.

During your conversation with Captain Obo, you chose “I offer redemption”. You need to read his diary first, located on the top level of the ship, on a table.

A word to the wise…

When solving a puzzle, find what’s needed the first time around.

During the coal puzzle, before using the cart, take the pipe near the box and start hitting all coal chutes until you find the full one (it will sound different).

When solving a puzzle, make a perfect duplicate on the first try.

Get your old reflexes back to make an elected official give in.

Convince the mayor I’m sorry to bother you> Leave with the yukols> Think of the elections.

Not sure you can miss this. The mayor will aproach you at night on your way to funicular, granting the achievement. Make sure you take the path that goes by the mayor house.

Prove to the clinic staff that you’re right despite everything.

Again, not sure you can miss this either. After you see Olga in her office the first time plotting against you with the Colonel, speak with Dr. Zamiatine. He will not believe your accusations. During the infiltration part in the clinic, after you distract the soldiers, go to Zamiatine office.

When solving a puzzle, start the mechanism you’re asked to without stalling a single time.

See beneath the surface to convince a survivor to help you.

Convince the Survior from Baranour, Katerina Make sure to read the photo album before leaving, then just be nice and impress her. Pardon>Introduce yourself>Talk about photo album.

Again, not sure you can miss this either. After you go back to the metro in search for clothes, during your way to the surface you will meet Kurk. Speak to him.

Receive an old friend’s congratulations by helping him before he asks you to.

Restore power to the park before being asked to. Connect the ship to the power lines and start the engines before speaking to Oscar while he sits on the driver seat.

After you get to play with Oscar, immediately try to return to Kate (press the red button a couple of times until the achievement pops.

Raiders of the lost temple

When trying to solve a puzzle, open the doors of a ruin with fewer than 20 manipulations.

Solve the RGB beam puzzle in less that 20 moves. Here’s the solution. 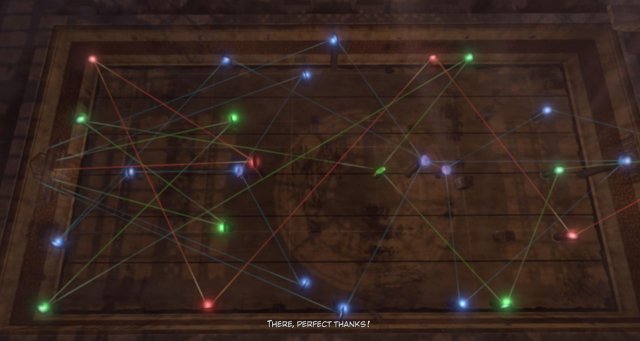 When solving a puzzle, you used a strange machine without putting out the fire you lit beforehand.

Just as the name says, use the machine without putting out the fire. To make sure the fire stays lit, don’t block the smoke. Better yet, set the machine first then the last thing you do is light the fire.