This guide is about the second spam master in the game, of course the first spam master being YeLlOw MaN. Be ready for lots of spamming and tips from a lvl 45 Ada.

Ada is honestly S tier, her weapons and sigs are pretty good. She is a great pick in lower ranks but pretty good in higher ranks too. I mean I don’t wanna fight any Ada’s so think twice before maining her please. Ada’s price is 3,900 gold, which is pretty cheap.

Store Description: The shadowy corporation of a corrupt future trained Ada to be the worst thing that ever happened to them. (pretty badass if you ask me). 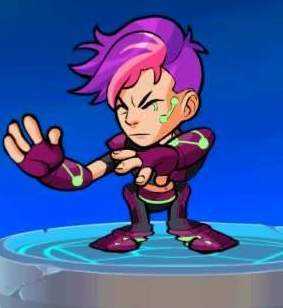 I would recommend to go with the defense stance since you never want 3 defense or if you are really crazy go with 7 strength and 2 defense and get bodied by a Xull (I can’t play this game).

One of her weapons is spear, a fairly long range weapon with attacks such as poking, hitting or spinning opponents. Also spear is the only reason I didn’t quit Brawlhalla yet.

Let’s go over the sigs:

Ada’s blasters are AIDS and a spammer’s dream.

I’m going straight to the sigs:

In this guide I will explain the basics and some tips with advanced techniques to be a pro at brawlball. Other Brawlhalla Guides: How to Play: Cross Guide. Random Spear […]

Brawlhalla – How to Improve Your Gameplay

For those who seek more knowledge to get better at Brawlhalla. Other Brawlhalla Guides: Full Guide to Brawlball. Random Spear Tricks. Orion Spear Gimp. How to Play: Cross Guide. ContentsSharing […]

Brawlhalla – How to Play: Cross Guide

This is a guide on Cross for Brawlhalla. It says tips and combos that I mainly use, and execute properly. Melee can be used on other legends such as Caspian, […]