Kaid, his guns, and his gadget make him a powerful hard breach denial op. His amazing weapon(s) and his scoped secondary make him great at holding long angles, especially when you take into account his extremely powerful DMR (it’s a slug shotgun with 11 rounds and 84 damage, it’s a DMR on defense) and headshot machine of a gun the AUG A3. 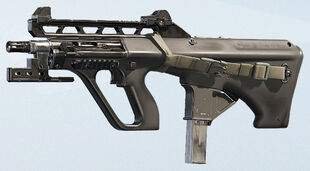 Kaid’s first gun does only 23 damage and has a mid-high fire rate of 700. In terms of manly DEE PEE ♥♥♥, it pales in comparison to it’s OTS-03-on-steroids brother, but what it does have going for it is recoil.

If you can handle long sightlines without an ACOG, and are able to hold angles at head height, this is the perfect helmet popper for you. Seriously, this gun may be one of the most accurate guns in the game, almost tearing down the UMP45. Honestly, if this gun had an ACOG it’d make even the TCSG scared. But it doesn’t.

I like to run the Red Dot sight on this gun and this gun only because it has the smallest and clearest reticle for long range angle holding, and the flash hider or suppressor and whatever grip I choose depending on how much I want to run around and ♥ up the enemy team or simply sit in my comfy little objective and look at a door.

Kaid’s second gun does more damage than Glaz’s DMR, can run an ACOG, has pretty manageable recoil with a vertical grip, can make murderholes and works well with his gadget. It’s a no brainer why so many Kaid players use this weapon, old and new, as it even reduces the chunkiest of boys to ash in 2 shots.

Even if you can’t handle the recoil, it only takes 2 shots to down on most ops. It also leaves them at 26 health, basically guaranteeing their death if bullets are exchanged, making it a good gun for getting assists.

It also wallbangs like a ♥♥♥ and has great murderhole potential, even if it only uses slugs. A single shot to a softwall and you’ve got yourself a hole basically the size of an impact nade. Speaking of impact nades, taking these with Kaid are amazing for creating rotation holes in Bomb, as you can just slap one in the middle of the wall and round off any loose ends with your DMR, allowing you to make a rotation hole you can run through and don’t have to vault or crouch.

Unfortunately, it’s quite poor for making rotation holes on it’s own, but still usable. If you took barbed wire and nobody else has any explosives, you’d best be getting ready to use…

The .44 Mag is another DMR, except this time you’re holding a pistol and not Tachanka’s other OTHER gun. Thankfully, it’s still a 2 shot kill, but this time it has a kick to make the SMG-12 ♥♥♥ it’s pants.

Because it isn’t slug based, the .44 Mag won’t make holes in walls as easy as, say, the BOSG 133.7, but it still will suffice in emergencies, and still works as a good backup option.

Where it really shines though? The scope. Behold the most clear and concise sight to ever exist, featuring a tiny red dot in the middle, little to no frame, and a great viewfinder. I think we would all take this over the ACOG.

It’s Bandit’s gadget and Ela’s gadget after a long night of drinking and partying.

Just kidding, kind of. Throw this little snow cone at any surface and, after a roughly 2.5 second warmup timer, will electrify anything near it, be it reinforced walls, reinforced hatches, barbed wire, or even deployable shields. The thing about this is, there’s no limit. Anything you can fit into that small sphere around the RTILA is going to have 2000 volts coursing through it’s hard, metallic veins.

What to Do with It

Well, for starters, use it on reinforced walls and especially hatches. Kaid is the only operator in the game that can deny hard breaches on hatches, and his electroclaw can also electrify two reinforced walls at a time, making him the perfect pick on sites like wine cellar/snowmobile garage. He can reinforce the garage door, throw an RTILA up there and boom, it’s almost impenetrable, unless they brought the angry british man.

Generally, in competitive, you’ll be bringing impacts, because nobody else brings impacts, and making rotation holes for yourself (and the imaginary second anchor that totally exists because ranked mode has so many of those) and cleaning them up with your DMR. However, bringing barbed wire is also a great choice because, like Ela’s gadget, you can hide these with careful placement. A good practice is to make a small hole in the floor with your TCSG, throw a claw in there, and then some barbed wire over it. They won’t be able to see anything, will make a lot of noise, take damage, and probably won’t be able to see the claw. As a side note, barbed wire does not stack, so don’t place two on top of each other. Still, though, you’ll probably bring impact nades in ranked because the day you learn to make rotation holes and use them is the day you start getting kills as an anchor.

You can also bandit trick with them somewhat, but it requires a lot of prediction and a lot of luck and timing to pull off. If you can hear the pellets or thermite charge being placed down, by all means do it, but if you can’t it’s not a very big deal. I mean, it is, but you really couldn’t do anything.

Kaid is an amazing operator with great guns and an even better gadget. I personally consider him better than Bandit because, you know, he can get hatches and even bandit trick with some effort, but I feel like he’s much more difficult to play because he has difficult guns to use and a great learning curve. I rate him 8 stars out of 10 for being a superb moroccan.

Lion Operator Guide… Other RSS Guides: Beginners Guide (Tips and Tricks). What are the Best Scopes? How to Play Jager. How to Play Blitz. How to Play Montagne (Advanced Guide). […]

Rainbow Six Siege – How to Twitch

Warning: this is not professional guide. Other RSS Guides: Beginners Guide (Tips and Tricks). What are the Best Scopes? How to Survive the Apex (Outbreak). How to Play Jager. How […]

A complete guide to playing Montagne, aka Monty. Including common strats, why Monty, how to work with others, how to deal with specific operators and suggestions for every map, site […]