A full detailed, step-by-step walkthrough to accomplish the Lone Traveler achievement with Tressa.

Note: As you read this section, consider reading “Ch.1 important task” subsection. Keep the same for the next chapters.

Yeah, you’re Tressa Colzione, a young merchant aspirant… You start on Rippletide. That is all known already. Just move towards path of Maiya and pick up every treasure chest you find on the way. Fight every battle you start also, you’ll be level 5 before reaching Mikk and Makk, probably. Learn Tradewinds.

Note: In this part of the walkthrough you’ll start feeling that you’re playing Dark Souls. Dying will be normal and even frequently, so don’t worry. You’ll move to further places you’re not supposed to go yet. The game autosaves whenever you enter a different place, and even if so, remember to reach the save point at the middle of any route or cave. That might be a useful checkpoint if you couldn’t reach a wanted place.

Now we must head to Quarrycrest and stop Morlock and Omar’s greedy plans to take every treasure from the hard-worker people of this town. You’ll need to become level 17 at least to do fine at beating them with Tressa alone… At this point you’ll realize how hard can be to play with only one character, and even you’ll ask yourself, how can you get pass this area in no time.

First, you should try wandering around the 1st tier routes. Find and kill caits. They only have 4HP, so you only need to use 2 soulstones to finish them. 1 cait will boost many levels, so that should be enough.

Save some job points, for now. Try getting a decent armor (buy from any shop). Something like this: 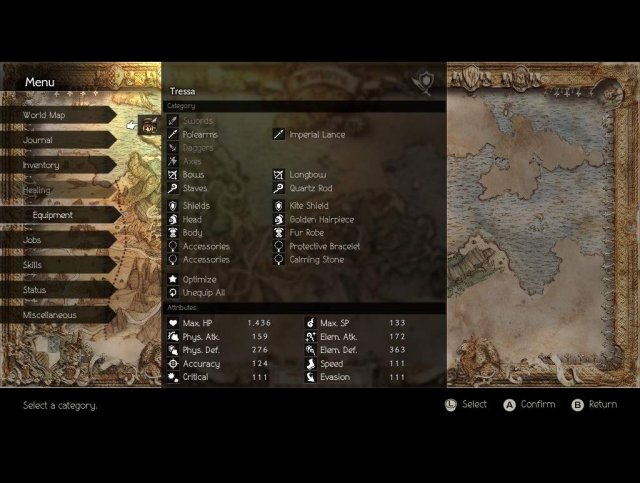 What you must do then, is to head to West Noblecourt Flats, where you’ll get the Scholar subclass. Do not fight at all. It’ll be a big waste of time and effort, as most enemies cause status changes, such as terror or sleep. Bring potions, have some luck fleeing and save at the save point in case you die before reaching the scholar shrine.

Use your previously saved job points to learn skills until you get “Evasive maneuvers” (Actually, you need only 130jp to get it. Not hard at all). With this, you’ll have it easier to reach even 4th tier places. Remember to enter in every town you reach from higher tiers, as that can provide you fast traveling to these places later. By doing things this way, you might die a couple of times, but eventually, in few minutes, you’ll be able to reach the most important place for you: Grandport. 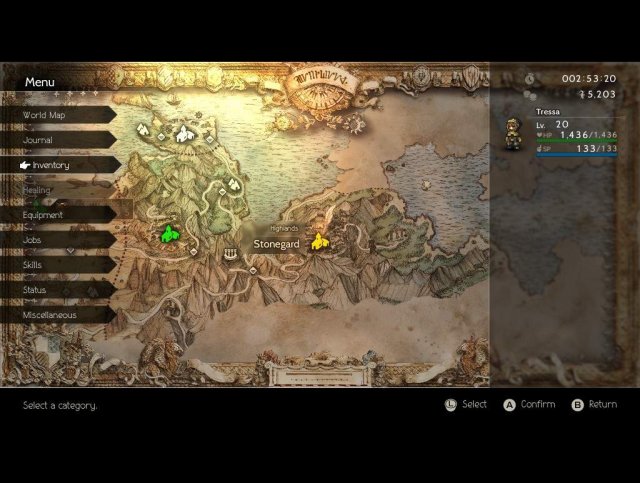 (Before heading to Goldshore, I went to Stonegard)

Now you’re where you’re supposed to finish your journey later. Here you’ll be able to get the best equipment for Tressa at the moment (and probably for the rest of the walkthrough). The first issue will be the money.

How you’ll get the necessary money in no time? Easy. You’ll have to reach for specific treasure chests that contain big amounts of money. I recommend heading to Everhold, the same way you reached Grandport. From Everhold, move to the Shrine of the Runelord. In here, you can get a chest containing 50k leaves. 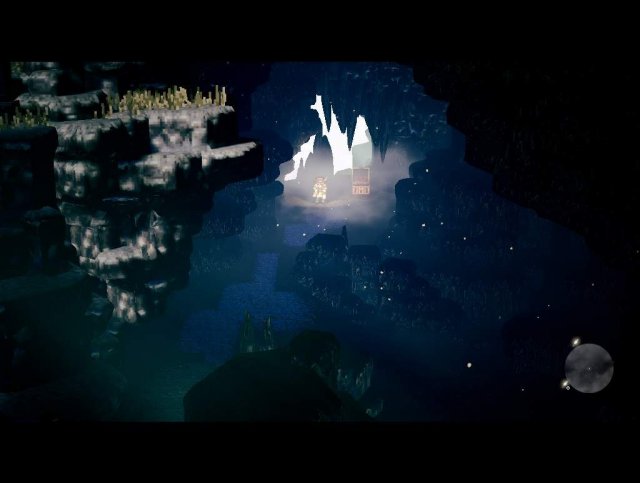 (From the entrance, move to the save point, then to the right at the bottom for 50k leaves).

Right after that, move to Maw of the Ice Dragon. There you can find another chest, down the ramp near the 3rd torch from the entrance, on the right. This time, it has 30k. If 80k leaves are not enough for you, then go back to Grandport. Back at the end of the Bazaar, you can find 2 chests containing 25k + an expensive relic to sell.

With +100k leaves now, you should be able to buy a good evasion setup for Tressa. With it you’ll be able to evade most of attacks from Omar, and from 2nd and 3rd tier area enemies, and deal very nice damage to everyone by casting elements.

On your way to fight the boss of this part, inside the manse, you can get a chest containing 6k leaves and a conscious stone. Equip it, since it might be very useful against Omar’s special move (in case it lands it successfully on you). Again, check “Ch. 2 important tasks” for further information. 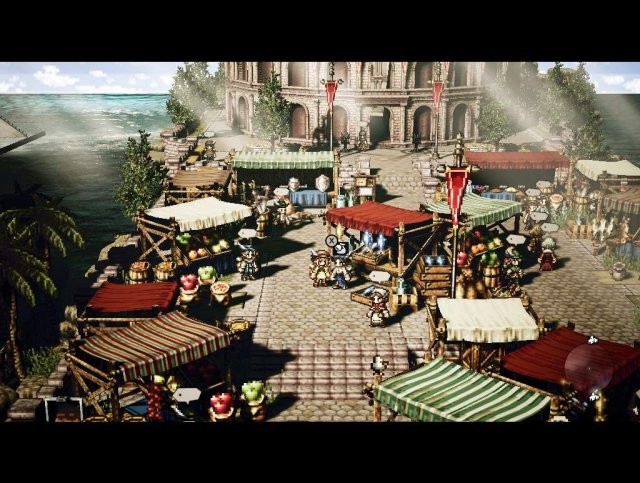 (The seller of the Rune Glaive) 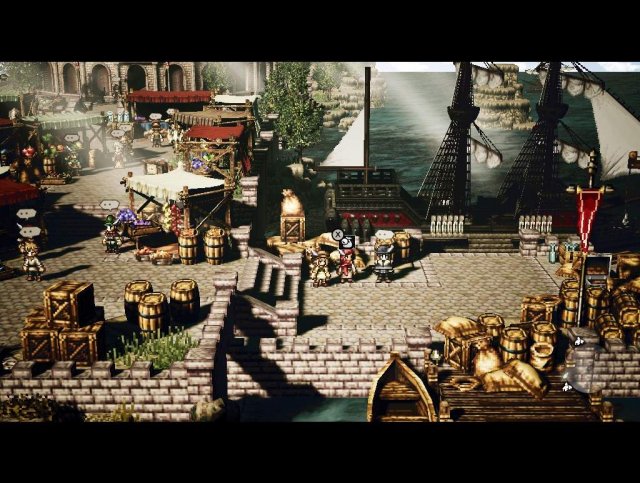 (The seller of the Ethereal Dancer Garb) 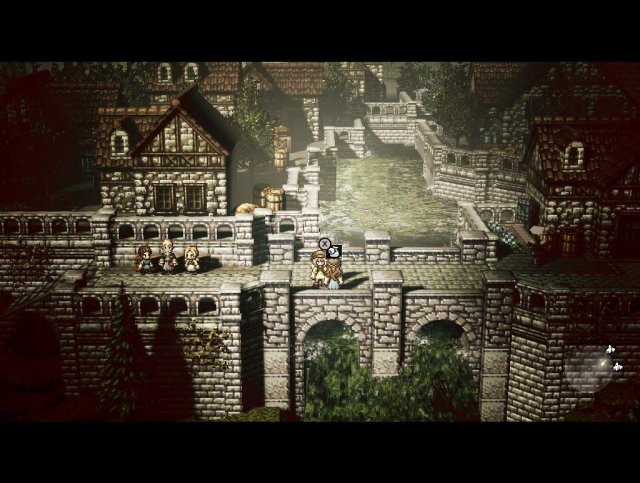 (The seller of the Elusive Shield. The Silent Bandanna can be bought at the armory)

Now on, it’ll start getting more challenging. The next foe will be the venomtooth tiger (now on VT). This damned creature had me a hard time for a moment, as I fought him depending a lot on rng.

I didn’t used hired help at all. I took another way to finish it, which can be more easily if you do it right (thing I didn’t do at that moment).

But first things first. You need to reach up certain level to deal with this beast. (Check “Training/Farming at Forbidden Grotto” section)

You’ll require to farm jp to get some fundamental skills to fight VT, and at least have Tressa with 2100HP, or more, which means to train her up to lv. 31 approximately.

Now the boss. Here is a quick preview:

The Strategy: Defend, to prevent VT having 4 moves in a row, load BP, do normal attack to weak his shield points, cast fire storm at maximum when KO’d. You’ll deal it about 4.5-5.5k dmg per cast, maybe more. Use healing grapes(M) to keep your life points over 1700, at least. Spare some large soulstones if you have him KO’d already, and you don’t have enough BP (via Patience). In some minutes you should finish him. 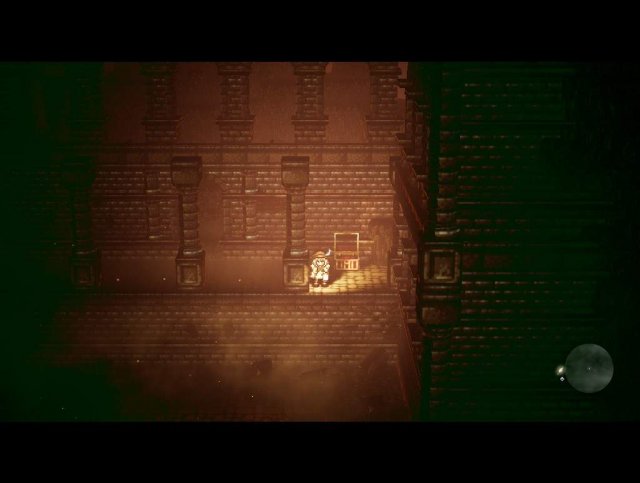 (Almost at the bottom, you can find this amulet) 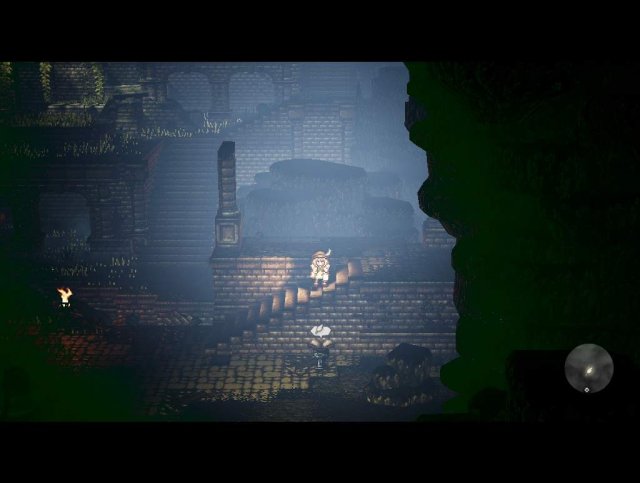 (Move to the right, then stairs down you should the chest containing it)

Note: Remember to check the “Farming money faster” section before doing this, too.

Here you can train in both forest area, or inside the cave. It’s up to you. At the beginning I suggest training in the cave, specially because you can kill vampire bats, which provide a lot of experience and jp without much effort. Stay in your scholar subclass. They don’t have much HP and only hold 1 point on defense. Kill them all with Ice. You can also find blue twin snakes. They are weak to fire.

The only issue is that in this cave you can easily find lightning elementals, which can be absolutely annoying if they don’t let you escape (as they deal 600-900 damage per each move they do, event resulting to get you killed by the turn you decide to flee). The Thunderstorm Amulet reduce that damage to almost 0, literally.

Now the VT is dead. It’s time to head for the final performance. The next challenge is: Esmeralda (the runic beauty). Sincerely, at the beginning I had no idea on how to finish her, but fortunately, some guy found the key to defeat her in which is the fastest way, I think.

First, fast travel to Grandport, change the evasion build, for armor. Equip the highest amount of armor you can. You’ll need at least over 880 armor to resist Esmeralda attacks better.

Get revitalizing jams. This will be a key item you’ll need in your final boss battle. Train to level up, get a lot of money and enough jp for the skills you’ll equip. For training, I extremely recommend you move to Maw of the Ice Dragon (Check “Training/Farming at Maw of the Ice dragon” section).

The Strategy: This can be very tricky and complicated if you don’t follow the steps correctly. I will post a video below. In summary, all I can tell you is that you should be careful to know when to use Energizing pomegranates (L), Refreshing Jams and Revitalizing Jams. Use eye for an eye to weaken the boss’ shield.

Select Cleric subclass before starting. Cast Aelfric to get 5 turns of double cast. Spam sidestep, and once you get to knock down Esmeralda and have 5 or more evades remaining; Aelfric and BP for maximum charge, cast veteran soldiers from hired help. You’ll have to do this twice while having Aelfric. Doing it thrice would be an overkill, since you do about 35k damage pest cast, so the 3rd time just cast it without cleric’s ultimate.

If you do all as seen on the video, that should be a wrap. The Lone Traveler achievement will be finally yours. 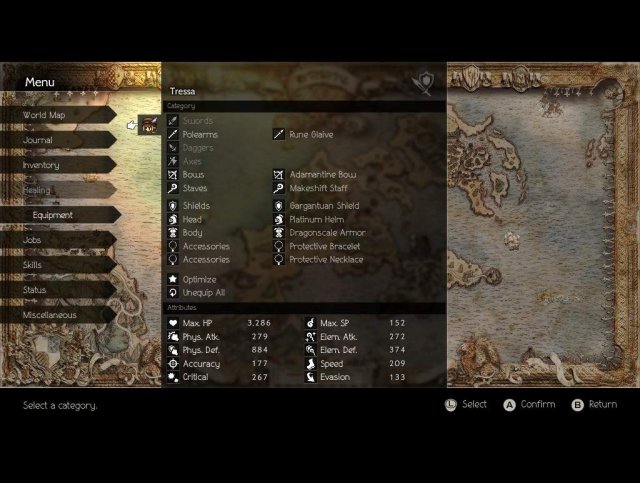 (You can try getting between a Adamantine bow, or a Yeti’s longbow, anyone. If you have more money to spare, change Gargantuan shield for Forbidden shield. Forbidden shield will reduce the damage of the rune blades by 200, which can be a lifesaver)

Training / Farming at Maw of the Ice Dragon

Note: Walk around the entrance, farm money, too. Remember that you’ll need money for last boss.

This area is very special since it commonly spams out War Wolves and Snow Leopards, and the 3 kinds of caits sometimes, too! It’s all easy to farm here, since the felines have low shield resistance and all of them can get KO’d easily by casting Arrowstorm. You’ll need to become hunter for this.

War Wolves are also weak to wind element, so one Tradewinds casted at maximum should be enough to even kill them in one turn.

Remember to bring your armor build, evil ward and Dragon’s Scarf, to prevent depending on use inspiriting plums. 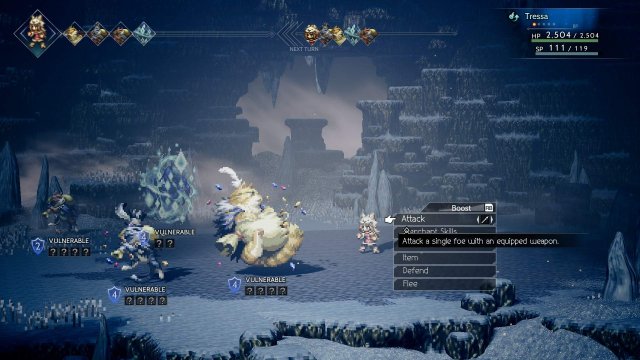 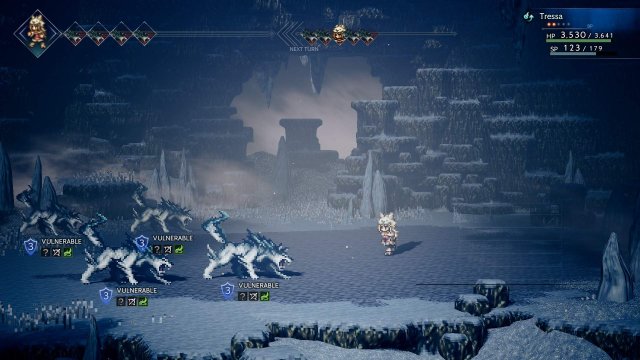 As you know, Tressa can pick up random amounts of money almost each time she visits a different place. In case you’re training at Forbidden Grotto or in Maw of the Ice Dragon, you can reset her passive each time you start a battle. Either you decide to fight and kill your enemies, or just flee, the passive will work the next time you go out of the cave. Just go out and return. In that way, in Maw of the Ice Dragon you can get between 400 up to 4300 leaves each time you move to south Northreach route. Besides, remember that you can always equip “Grows on trees” passive which can be a plus when fighting enemies. Basically, with Tressa you hardly never run out of money, so make good use of this knowledge.

Just like the wise Cyrus Albright says, knowledge is power and it is something to be shared among all people

I’m just passing this extra information here (see the link below). It shows with high detail where to get every Stat-booster found in the game. This can be a useful source for you to save some time and find these items to upgrade Tressa. Please note that you won’t be able to get them all since you’ll require the skills of the other travelers.

Open up the following link, in case you need this information.

Other Octopath Traveler Guides: Interactive Map (Shrines, Cities, Caves, Ruins and Catacombs). How to Beat Managarmr Easily. Spread Sheet: All Information This spreadsheet details in point form where to find […]

Allows you to swap your starting character out of your active party. How to Unlock Starting Character Modifying Save File Urgent: If you followed the original version of this guide […]

Tweak that allows you to swap out your starting character without completing there chapter 4 story. Unlocking Protagonist Guide Modifying Save So for some reason Square Enix chose to locks […]