The way this glitch works is by tricking the starting timer off of killing the dummy.

Originally found last year on reddit by /u/ficoplati. So thanks to him for that.

Throw an airstrike marker at your feet.

Get the airstrike marker to spawn again, come close to the dummy, and throw it at your feet. The goal is for you kill yourself and the dummy at the same time.

Respawn around the first tick happens, and then just go through the course like normal, but don’t cross the finish line (either of them).

You’ll know it worked if each dummy on the actual course is down.

Without crossing the finish line(s) stand kind of close to the gate, and start throwing airstrike markers at the general location of the starting dummy.

General location of where to throw. 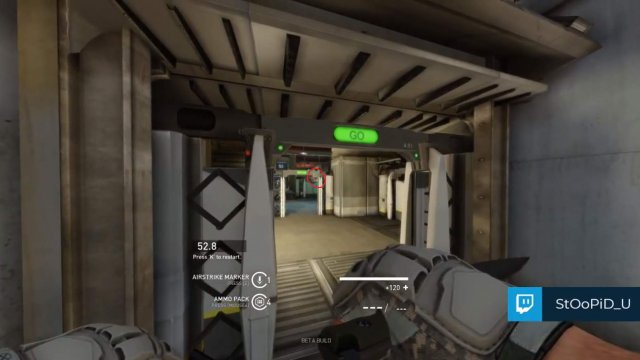 After killing the dummy, wait for the countdown to end and cross the gate.

If you are interested in doing this glitch, but don’t want to just follow a text guide, you can check out a video!

Dirty Bomb – How to Get The Air Cav Achievement

Getting Air Cav Achievement You take Javelin, you fire the rocket on guided mode. Then you have to keep the control of the rocket until the achievement pop. I advise […]

Dirty Bomb – How to Fight Javelin – A Quick and Detailed Guide

Sine Javelins release many players have complained about her being OP, being a better fragger or just outright annoying to fight. However, there are some easy ways on how to […]