This guide marks the locations of all known Legendary Hunt challenges found in Borderlands 3.

As you explore different areas and planets, Sir Hammerlock may ask your help in taking out particularly tough and unique monsters for rewards. However, its worth noting that the difficulty of the hunts are based on the region, and they do not scale much during the main story.

Legendary Hunts below are divided up into regions. 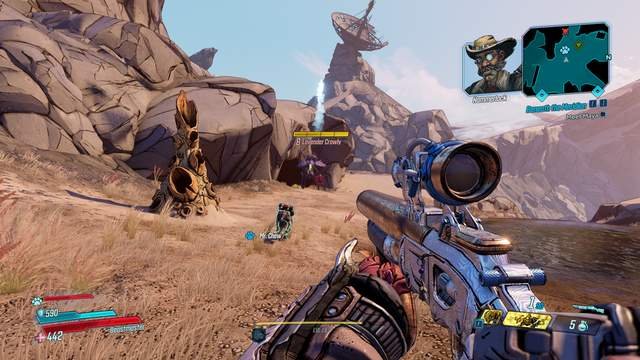 The Lavender Crowly is a level 8 Legendary Hunt located in The Droughts. The beast will come out of cave at the end of a field marked by Varkid hives, and it is better to take out all other Varkids in the region before engaging. 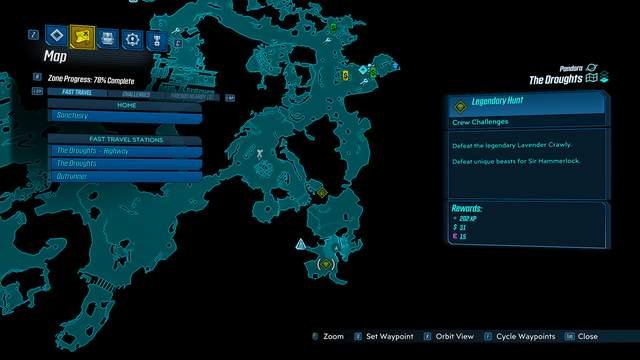 You can find this unique Varkid on the far left side of the map, by taking the first left path past the Crimson Raiders base, or driving north across the gap and dropping into the valley past the bandit outpost where Dumptruck is located.

As the matriarch of the Crowly family of Varkids, Lavender can a tough foe to crack, as she’ll use cryo damage in her flight trails, projectiles ,and slams. Defeating her will cause her to spawn her next of kin – Bobby and Kira Crowly, who each have their own elemental damage to bring.

Each of these Varkids in turn will spawn two more family members. Kira will bring forth Eddie and Valerie, while Bobby will spawn Martha and Matty. be sure to take either Bobby or Kira first to lessen the amount of adds you’ll be facing at once. 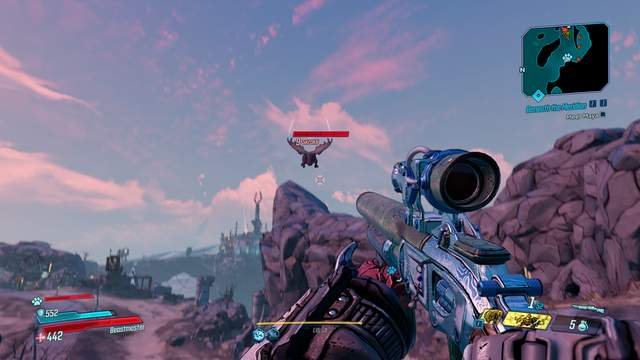 The Skrakk is a large and dangerous level 9 Rakk that Sir Hammerlock wants you to take down in the Ascension Bluff area, not far from its entrance. 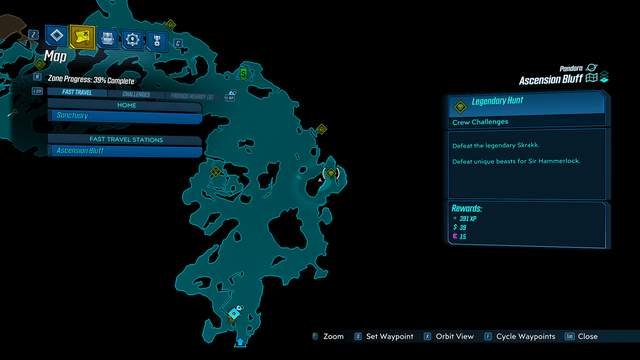 You can find this beast by hugging the right wall after entering the region, not far below a Typhon log. The area will spawn multiple Skags and Rakks to deal with before the best emerges, and you’ll need to shoot it out of the sky. 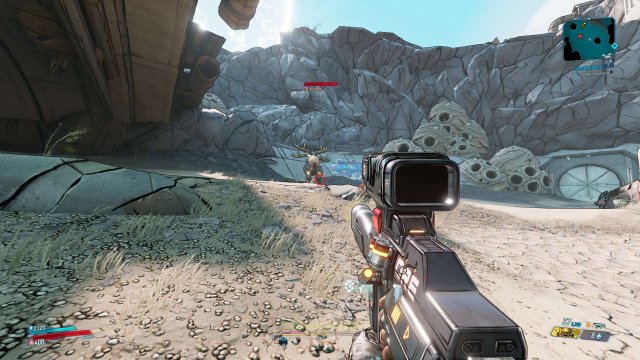 The Antalope is a giant Level 29 spiderant variant which can be found in the Devil’s Razor area, on the planet Pandora. It can be found in a low lying area, near the center of Devil’s Razor, surrounded by nests. Simply approach the center of the area and it will appear. 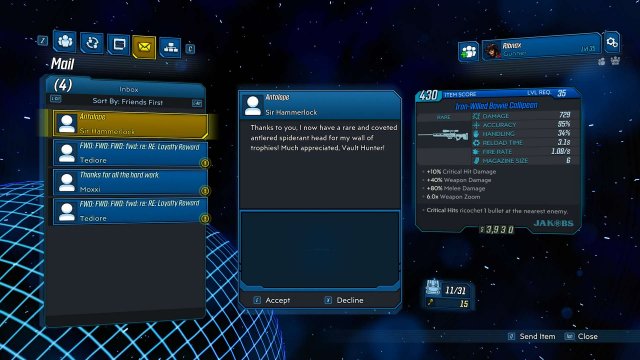 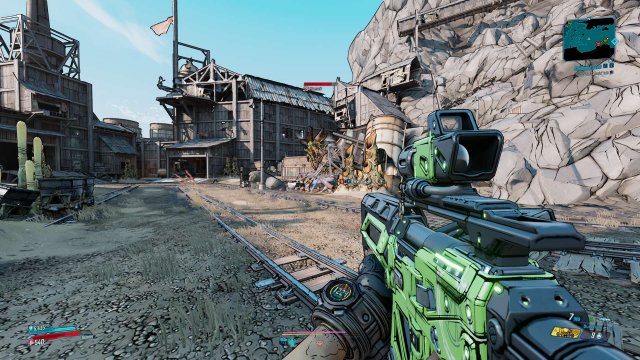 The Manvark is a Level 39 Varkid variant Sir Hammerlock wants you to kill. It can be found in Konrad’s Hold on the planet Pandora. 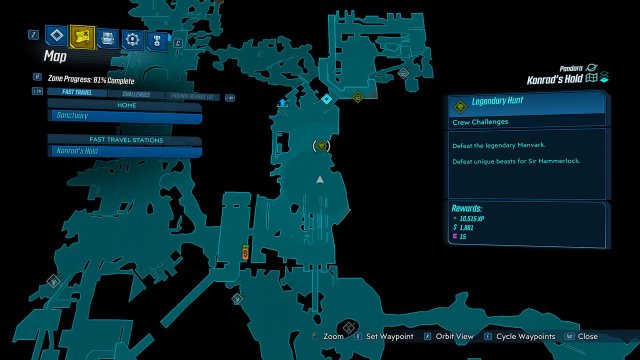 To find Manvark, proceed along the main path until you pass through the first building, then exit at the back and turn left. After dropping down onto the train tracks, the Manvark will emerge from the Varkid nests. It will alternate between Varkid and humanoid forms as you fight, so use every weapon at your disposal to defeat it. 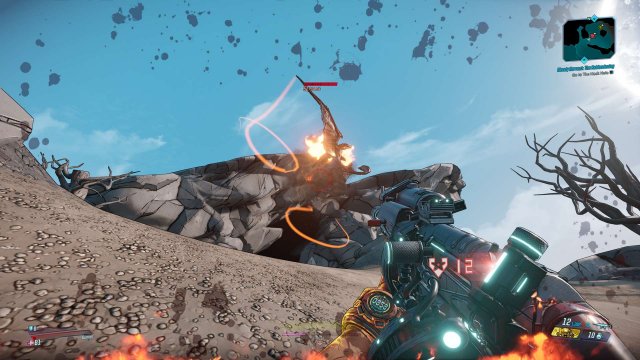 The Phoenix legendary hunt can be found in The Splinterlands, located on the planet Pandora.

From the Pitt’s Stop Fast Travel Station, grab a vehicle at the Catch-A-Ride, then drive forward. Follow the cliffs on the left once you reach the clearing, then follow the winding path up to find a cave where the Phoenix can be found. The creature will fly around, then approach to breathe fire, so bring Fire Resist equipment or Talents if you have them, and take projectile speed into consideration. Homing grenades, spread-shot weapons, or fast-firing weapons do well here, and Cryo damage is ideal against this fiery foe.

After you kill the Phoenix, it will burrow underground, emerging as the more powerful (higher level) Reborn Phoenix. Killing the Reborn Phoenix will cause it to burrow, finally assuming it’s final form, the (even higher level) Legendary Phoenix. 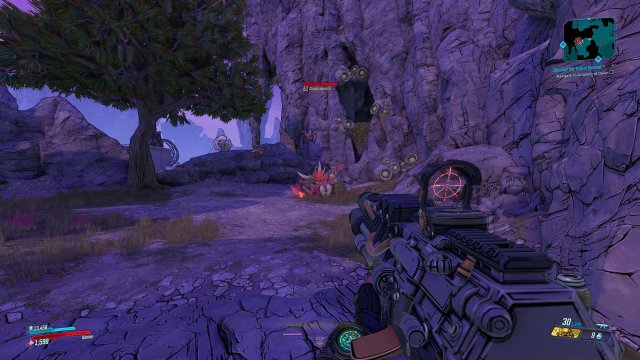 The Cupacabratch is a powerful Ratch Hive variant Sir Hammerlock wants you to take out. It can be found on the planet Athenas. 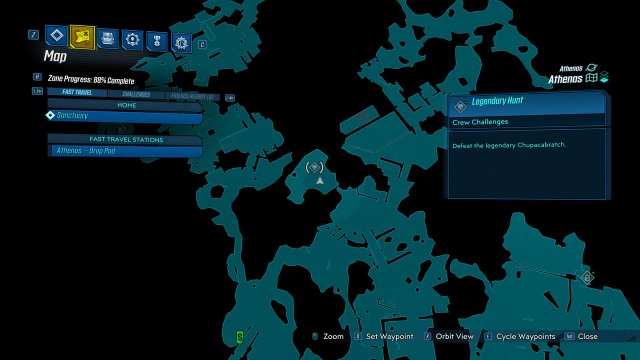 The Chupacabratch can be found at the center of Athenas, in a small area jutting off from the main path. Hop up into the nest-ridden area and the monster will appear. 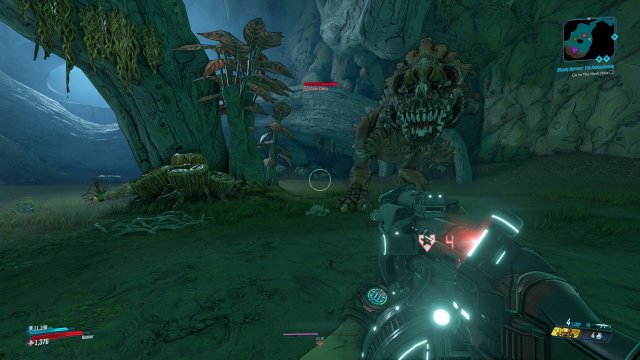 The Chonk Stomp legendary hunt can be found in Floodmoor Basin, on the planet Eden-6. From the Reliance Fast Travel station, grab a vehicle at the Catch-A-Ride, then head out of town to the right. Once you leave Reliance, head down the hill on the right and follow the path across the map until you are close to the transition to The Anvil.

From there, turn left and run through the the dinosaur nests. Once you reach the end of the area, you’ll encounter the Chonk Stomp. 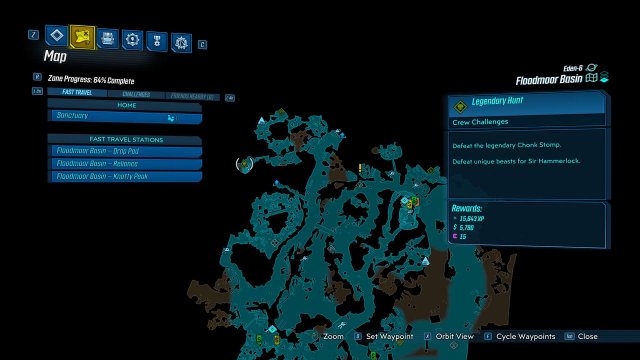 The Chonk Stomp is a more powerful variant of the Saurian enemies you’ve seen in the area. It can breathe fire and will charge, but it is unarmored, so explosive and fire damage will serve you well. With such a large body, spread-shot weapons and fast-firing weapons will also do well against this absolute unit. The Jabbermogwai legendary hunt can be found in Voracious Canopy, located on the planet Eden-6. From the Fast Travel station, follow the left-side boundary of the level until you reach the far side of the map and you’ll reach an area rife with uplifted Saurians. In the midst of the swamp, there is a hut. Approach it and climb the ramp and the Jabbermogwai will appear. 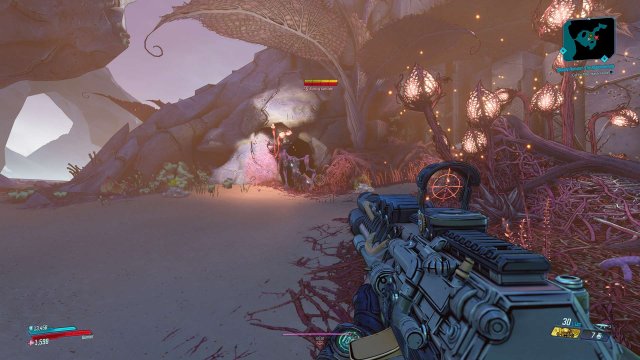 The Blinding Banshee can be found in Desolation’s Edge, on the planet Nekrotafeyo. It is a stronger variant of the Mantikore enemy type. 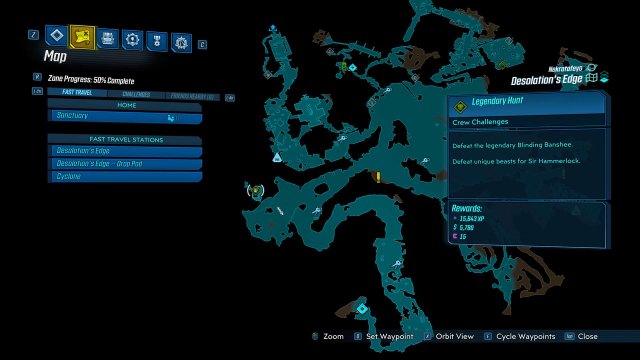 From the Desolation’s Edge Fast Travel Station, head out to the main area and grab a vehicle at the Catch-A-Ride. Take a right and proceed down the slope. Once you reach the bottom, you’ll find a circle of stones on the right. Enter the ring to discover the Blinding Banshee’s nest.

The Pyre of Stars Legendary Hunt The Swarm Host / Brood Mother is a Legendary Hunt which can be found in The Pyre of Stars, located on planet Nekrotafeyo. From the Fast Travel point, you’ll need to proceed all the way around the zone. Just before you return to the first area by dropping down the ledge, you’ll find the nest in a cave on your left.

Borderlands 3 – How to Find Secret Room (Bounty of Blood DLC)