Don’t Worry About Falling Off a Track

While we don’t exactly know why, in Mario Kart Tour, racers cannot fall off of courses. Try as you might, but an invisible wall will stop you from falling off the course.

Now, this isn’t to say that you should not fear the outer edges of a course. While you won’t fall off, your driver will be slowed down so it’s still best to avoid the walls of the level.

Swipe Up When You Get Any Amount of Air

When your racer launches off a ramp, a boost jump or even just into the sky courtesy of a hot geyser, quickly swipe up on the screen to make your character do a trick of sorts. 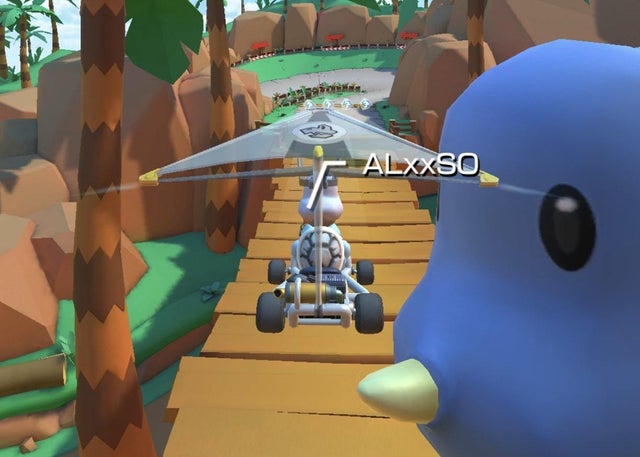 Sure, this trick is cute but it’s the small speed boost you receive when you land that matters here.

Turn Power Saving On If You Want to Save Your Battery

Mario Kart Tour will use a lot of your phone’s battery. If you don’t have battery to spare, go to the game’s main menu by selecting the menu button on the bottom of the screen.

Once here, select the settings button in the bottom right corner. You should see a System Setting dubbed Power Saving. Select this and the game will go into power-saving mode, which will conserve your battery while you play the game.

Usually in Mario Kart games when you have an item queued up for use, driving through another item box will have no effect on you. That’s not the case in Mario Kart Tour, at least by default.

In Mario Kart Tour, the default setting for situations like this is that your queued item will be automatically used to make room for a new item from the item box you have driven through.

This is a nice touch, but if you’re looking for the game to feel a bit more like traditional Mario Kart, go to the game’s settings and turn off Auto-Item.

Mario Kart Tour will have you racing in 50cc by default. If you’re hungry for points, which translate into Grand Stars eventually, increase the CC for your races. 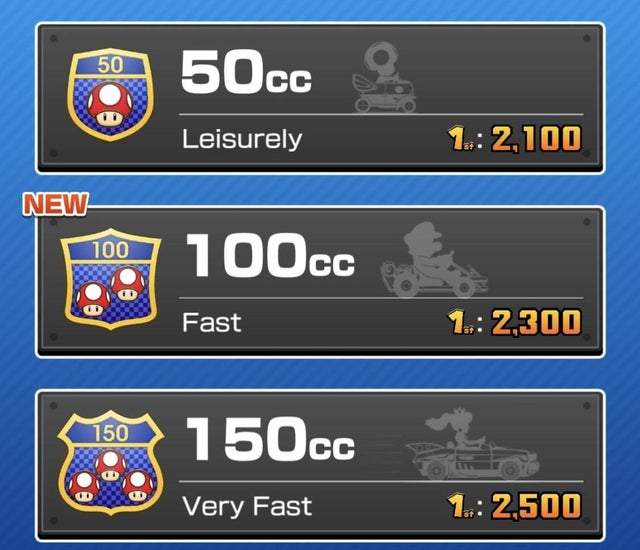 200cc will earn you the same number of points as 150cc with a first place win.

Mario Kart Tour dubs 50cc as leisurely, 100cc as fast and 150cc as very fast. Too Fast is what Nintendo uses to describe 200cc.

If Something Sticks Out to You, You Should Drive Into or Over It

This tip might seem odd but more times than not, it will come in handy. In some courses, things will stick out to you. Often, if you drive over those things or run into them, you’ll receive a speed boost.

An example does better to explain this tip: Dino Dino Jungle features a large dinosaur and a number of hot geysers. At first, both the dinosaur and the geysers might seem dangerous, but it turns out, they’re a handy source of speed.

Let’s be honest: nobody can say that they’ve never quit a Mario Kart race before it’s over because they know all hope of getting first place is lost.

Don’t do that in Mario Kart Tour. 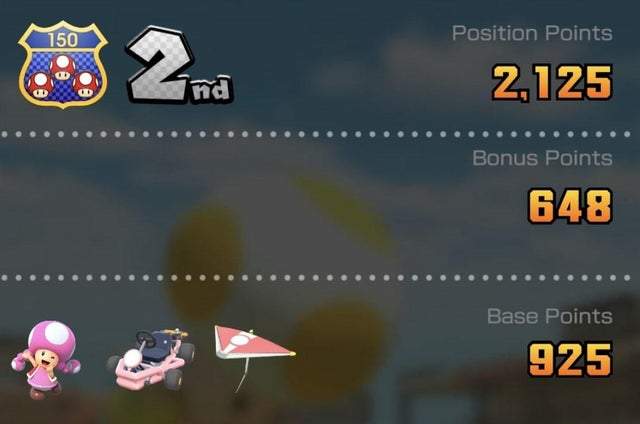 Racers earn points each race no matter the placement. So, even if you come in last place, you’ll still be rewarded for your efforts in the race (although not nearly as much as that of first place).

Beyond points though, you don’t necessarily have to get first place to earn five stars on a cup. We got second place on Toad Circuit in one of our playthroughs and were still given five stars and on Dino Dino Jungle, we got third place and five stars on it as well.

Strategize Your Character and Kart Loadout

Picking your favorite character, the best kart and the most stylish glider is tantalizing, but in Mario Kart Tour, if you’re after the first place win and the maximum amount of points, you should focus more on your loadout.

If you pick a character that favors a certain course — say Toadette on Toad Circuit — you’ll receive three items per item box. 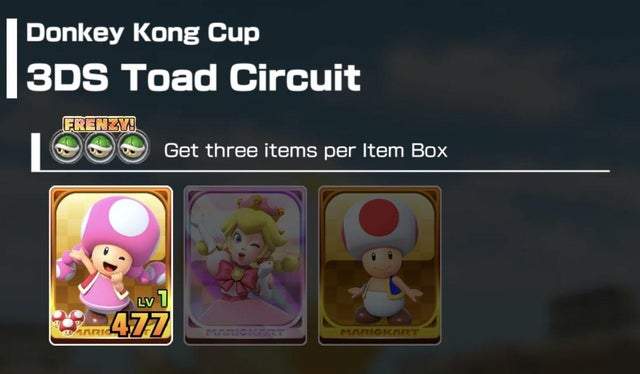 By choosing a kart to match the character and course, you’ll receive a certain bonus as well. This bonus can be as high as twice the points.

A matching glider can earn you a combo bonus as high as three times the points as well as a big combo-time boost, which are special boosts received from chaining together certain actions.

Every action you perform in Mario Kart Tour will earn you bonus points. Be it a super jump or a green shell knockout, when you finish the race, all of your actions will be added together for a grand total of bonus points. 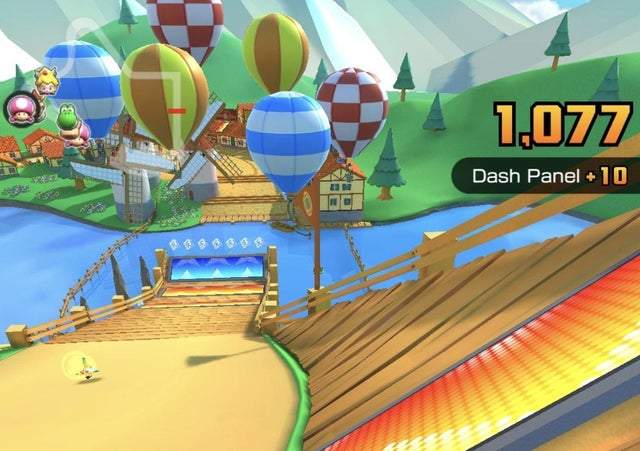 The actions that earn these bonus points can be chained together for additional bonus points and on-the-spot boosts while racing. For example, if you were to jump off a boost ramp and then quickly take an enemy out using a red shell once you land, you’ll receive a quick turbo boost for chaining together actions.

If You Need Some Coins, Play Coin Rush

If you’re perusing the Mario Kart Tour shop, you might spot a Daily Select you’d like to purchase. If you don’t have the coins to get it, though, you might be looking for a quick way to fill your purse. 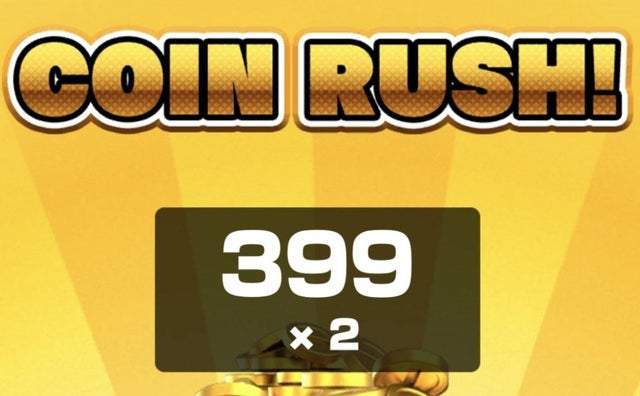 At the top of the screen is a rectangle that shows your gold coin count beside a plus sign. Hit the plus sign and you’ll be asked if you want to play Gold Rush.

This game mode will see you racing through a relatively easy course alone as Gold Mario. If you drive near a coin, Gold Mario will automatically collect it. 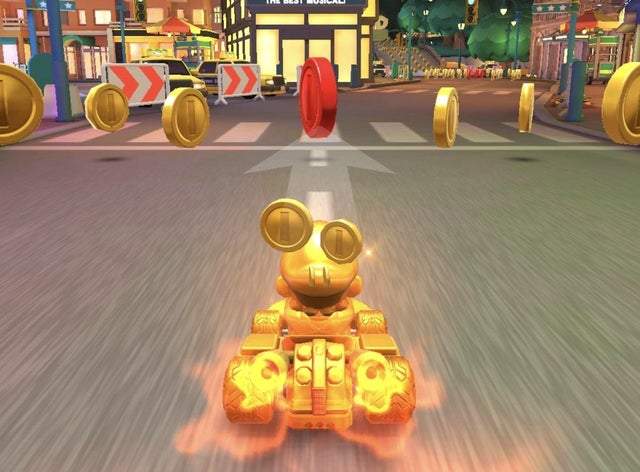 Drift as Much as Possible

Much like every other mainline Mario Kart entry, you should try and drift as often as possible in Mario Kart Tour.

Drifting allows you to easily clear sharp turns and corner and gives you a great boost for doing so successfully. To drift, maintain a turn after taking one — if you turn left, continue to keep your finger swiped to the left to enter a drift. 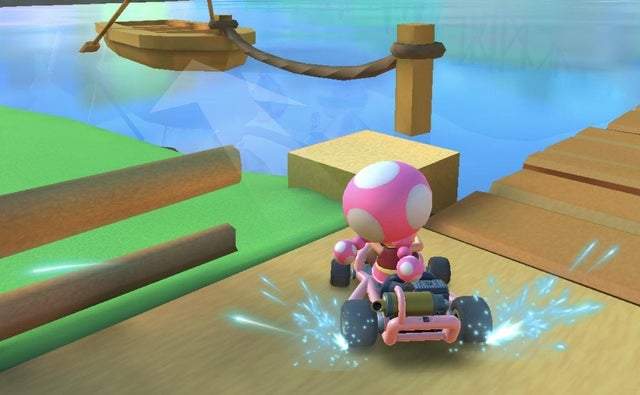 The orange fire that eventually turns blue is a boost you’ll receive once you finish the drift. The longer the drift, the longer the subsequent boost.

When you see orange-yellow pads on a course with arrows pointing forward, do your best to drift into these. Doing so will not only give you one of the best possible boosts in the game — a boost pad boost followed by the drift boost — but it will give you a lot of bonus points as well as you’re chaining together the use of a boost pad and a drift. 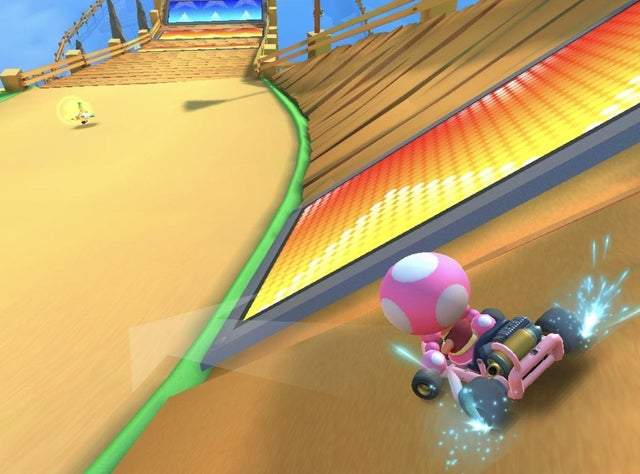 Keep Smart Steering on If You’re New to Mario Kart

If Mario Kart Tour is your first Mario Kart game, you should keep the Smart Steering option on as it will help make steering a little easier for you so you can focus on learning the game’s other mechanics. This setting is on by default.

If The Steering Feels Weird, Turn Off Smart Steering 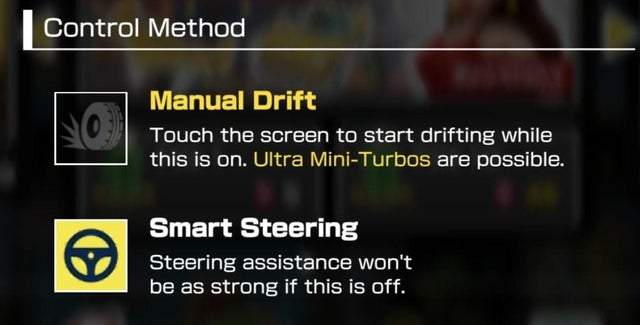 Part of the reason the steering might feel odd to you is that the Smart Steering is working to automatically aid you in steering. This is not something Mario Kart players are used to as it’s not a default option in traditional Mario Kart games the way it is in Mario Kart Tour.

Once you turn it off, the touch steering will still probably feel weird until you get used to it but it will help not having an invisible hand slightly guide your kart through a course.

Give Gyro Steering a Try

Gyro Steering is an option for steering in Mario Kart Tour and instead of using your finger to steer in the game, you can use your phones gyrosensor. To turn left, turn your phone left and so on.

It can be tough to get used to but for some, it might be the ideal method for steering — it certainly stops your finger from blocking a portion of the screen. 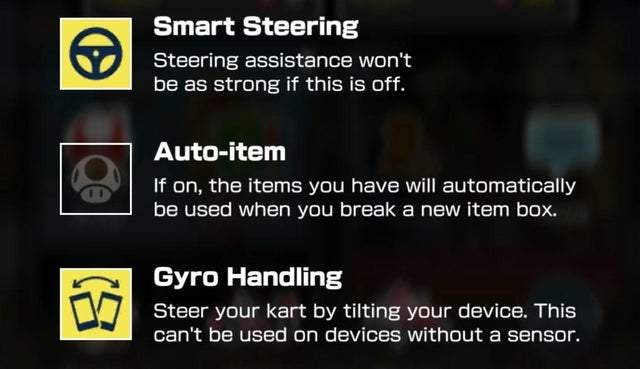 You can pair Gyro Steering with your finger as well. With Gyro Steering on, the touch method of steering is still active so try to utilize both for those extra sharp turns.

Use Manual Drift If You Have Gyro Steering On

Manual Drift is an option in Mario Kart Tour that allows you to control when your driver drifts with the tap of a finger.

With Gyro Steering on, you’ll be tilting your phone left and right to turn your driver on screen. Tap your finger on the screen when turning to have your driver begin a drift. 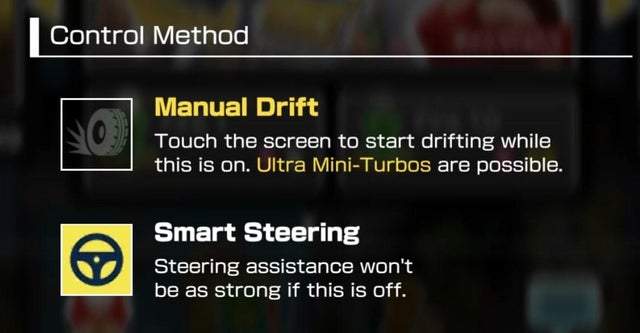 We haven’t found this method of drifting and steering to be as natural as the default way, but for those who prefer Gyro Steering, manual drifts can come in handy.

Get a Free Two Week Trial of the Gold Pass

When you click on the Gold Pass option in Mario Kart Tour, hidden at the bottom of the screen next to the price is a sentence that says first time players can try out the gold pass with a free two-week trial.

Click the option above to purchase the Gold Pass and before you’re charged, the game will tell you that your free two week trial begins immediately. It will also tell you the day you’ll actually be charged $4.99 for the Gold Pass. If you don’t want to be charged for it when that day comes, simply cancel the pass.

Get a Character With the Gold Pass

If you purchase the Gold Pass, be it at $4.99 or with the free two week trial, you’ll receive a number of items: Rubies, Gold Coins and a random character.

You Can’t Race Your Friends Yet, But You Can Challenge Their Scores

Mario Kart Tour will eventually have multiplayer but as of right now, at the game’s launch, multiplayer has not been implemented into the game. 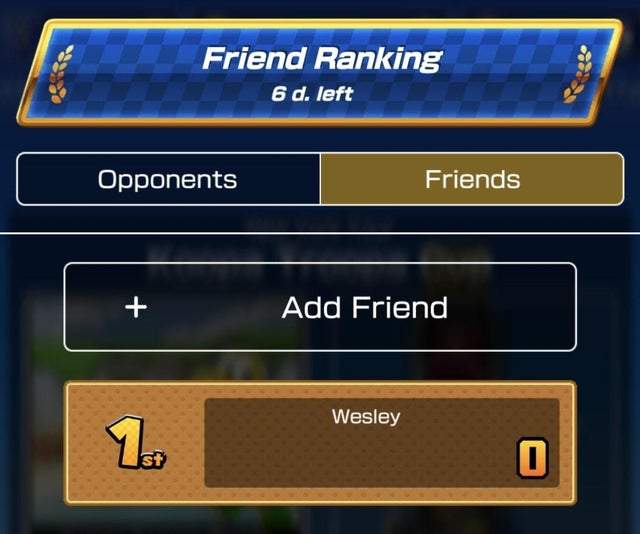 However, you can still challenge your friends. Instead of actually racing against your friend, when you challenge them, you’ll be tasked with getting a higher score than them in rank-eligible cups.

Add Your Friends Through Social Media

Once you unlock the ability to add friends upon completing the third cup in the game, you can add friends through a number of ways. You can give your friend your ID and have them add you, or they can give your theirs so that you may manually add them instead.

If You Get a Duplicate From a Green Pipe Pull, the Duplicates Are Merged to Enhance the Skill Level

Getting a new character or kart from a green pipe pull is very exciting, but getting a character or kart you already have feels like a waste of Rubies. It isn’t necessarily a waste, though, because duplicates are merged to enhance a skill level.

So, a base level one Koopa Troopa will see their skill level increased to halfway to level two if a duplicate Koopa Troopa is pulled from a green pipe.

Mario Kart Tour – How to Guides

Mario Kart Tour Guides: Tips and Tricks. Things the Game Doesn’t Tell You. Point Scoring, Advantages, and How to Spend Currency. How to Take Out 3 Pipes. ContentsHow to Rocket […]

Mario Kart Tour – How to Take Out 3 Pipes

Mario Kart Tour Guides: Tips and Tricks. Things the Game Doesn’t Tell You. Point Scoring, Advantages, and How to Spend Currency. How to Guides. The first set of Tour Challenges […]