This guide is designed to get you up to speed and down to Earth (among other places).

What Do I Get for Free? / What Should I Buy?

Welcome back to Destiny! Whether you’re coming back from launch month, or coming off of the heels of the last season, this guide will get you up to speed and ready for the incoming year of Destiny content!

Disclaimer: This will be a very surface level outline and will assume you have some Destiny background. I’ll have another guide specifically catered to new players linked somewhere here. If you want a deeper look into the content itself, youtube can answer most questions. Otherwise, trying out the content yourself is always a good way to learn quickly.

If you’re returning now, you’ve probably caught the whispers on the wind about Shadowkeep, the next Season and Destiny 2: New Light. I’ll be working in most of the details on that after we cover what’s gone down since you’ve been gone.

A lot has happened since the the launch of of Destiny 2, for those of you who don’t know:

You will still be able to play all of this content if you missed it, and I listed the new discounted price starting on October 1st. One of the nice things is, you don’t need any of this stuff to play future content: all Expansions and Seasons will be standalone in content.

If you don’t want to spend anything, you now have access to a LOT of content for free thanks to New Light (free for all players). This will let you access the vast majority of activities/destinations with your friends, including those from DLC you haven’t bought.

Here is everything all players have access to via New Light: 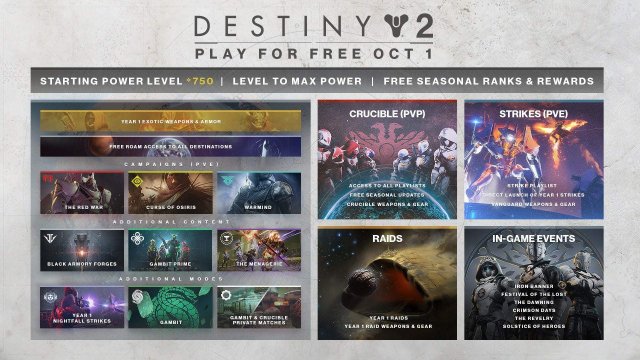 In other words, the things you dontget for free are the following:

We’ve got a lot of new stuff to cover, so let’s set the record straight. Here’s a glimpse at what were getting over the next year:

Seasons will last roughly 3 months and reach a conclusion, leading into the next season and tying the story arc for the year together.

Here is the seasonal infographic with all the dates on the upcoming stuff, including info on what you get for free, without the expansion/season pass: 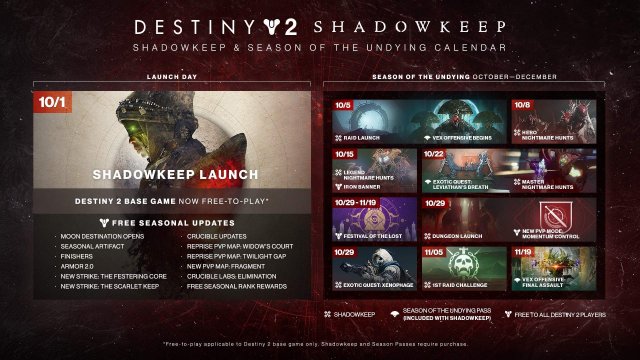 The new paid content as of October 1st will be:

The next sections will briefly outline each season you may have missed so you know what to expect without going in headfirst!

WTF is All the Stuff Before Shadowkeep?

Many of us were wondering the same thing when we first dropped into each new season of content and learned how all this stuff worked. I’ll be briefly giving each activity/event a summary as well as a 1-5 (least to most) rating on how important it will be to the core Destiny experience as well as how important the loot is. This is purely subjective and you are more than welcome to draw your own conclusions.

Season 2: Curse of Osiris (Free for all players on Oct. 1 with New Light)

Season 3: Warmind (Free for all players on Oct. 1 with New Light)

WTF is Shadowkeep and Season of the Undying?

Here is the layout of the new stuff coming on October 1st:

Season 8: Season of the Undying ($10 standalone or free with Shadowkeep)

What comes after that?

After the Season of the Undying, more seasons will follow roughly every 3 months. Every week will have new content to explore and pursue, until the next year’s expansion is released.

Destiny 2 – How to Reach the Softcap in Beyond Light Fast

This is a guide for new and returning players alike. I will show you how to get to the new seasonal softcap in Destiny 2: Beyond Light in less than […]

Whats up danger? You wanting to play some Gambit? Or are you just looking for fun doing bad? Look no further than here Brother. Gambit is an opportunity to make […]