So, Wish-Ender is pretty. Like… Really pretty. There are only two exotic bows in the game and Wish-Ender would win the beauty contest between the two. It’s not just pretty, thought. Wish-Ender has a scope that lets you see enemies through cover and arrows that penetrate enemies, doing damage upon entry and exit. It’s cool for those players who enjoy using Destiny 2’s bows, myself included.

Before you get this lovely piece of hardware, you need to complete the story through Forsaken and then travel to the dreaming City to Talk to Petra. She’ll have an item in her inventory that is labeled in Yellow. It’s an “idol.” Take this item and then open the map and go into the Shattered Throne mission.

Now, I highlyrecommend having a team of three going into the Shattered Throne Dungeon. It’s not hard, per-say, but irritating and three people will give you the best experience. Having at least one Warlock with healing rift would also be a massive help. This is just preference, however, and you can run the Dungeon however you want.

When my fireteam ran the Dungeon, I used my Warlock on his Solar Sub-class with Attunement of Grace. This Dawnblade path’s super creates a powerful healing and empowering rift that’ll keep your team alive in a pinch and allow you to deal more damage to the bosses. 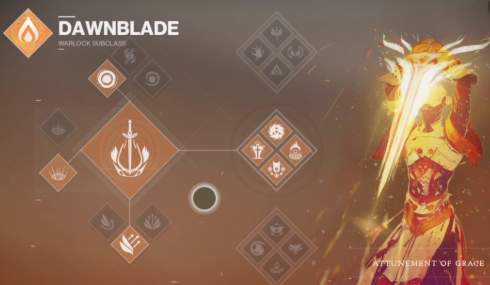 You need to complete one run-through of The Shattered Throne to start. The first part of the dungeon is a bit confusing, so I’ll explain:

In the first area, you’ll come across these projections: 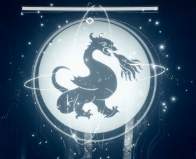 These projections correspond with different temples on the map. The first projection you come across will tell you which temple you need to go to next. Once you make it to the temple with the same symbol as the projection you were given, you must defeat all the enemies there to reveal the next projection. Once you’ve cleared all the temples, you’ll be told to go back to the temple where you were given your first projection and the floor will open up for you, allowing you to enter the rest of the Dungeon which is pretty straight forward from here on out.

Towards the end of the Dungeon, you’ll have to fight an Ogre boss. This boss is shielded. What you need to do is kill all of the Wizards and take their little orbs. You need to collect four of these before the time on the left of your screen runs down. Picking up another orb from a Wizard will reset the timer. If the timer runs out, you will die.

Note: If one of your fireteam members dies, they lose the timer and the orbs they collected. (They will no longer die if the time runs out for the other fireteam members.) You need a x4 buff on your screen to be able to turn in the orbs.

Once you’ve collected the orbs, insert them into the glowing receptacles to remove the boss’s shield and allow you to damage him. Repeat the process until the boss is dead.

Once you beat the boss, a door will open and you will see a statue of a woman holding a bow with three bowls in front of her. Talk to her before you CONTINUE. She is the statue you need to present the Idol that you got from Petra to. If you don’t do this, you will not be able to progress with getting Wish-Ender. 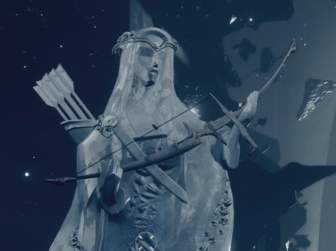 The Second boss of the Shattered Throne Dungeon is a massive Wizard that is immune to damage and guarded by taken Knights with Ribbons in their armor. To damage the Wizard, you need to kill the knights and take the orbs they drop. Kill all the knights FIRST and collect as many orbs as you can. This will boost your damage.

Collecting even one orb will activate a timer. When this timer runs out, you will die. However, there is a massive bowl in the center of the arena that starts out glowing blue. When the timer is close to running out, you and your fireteam must jump into the bowl to prevent the buff from killing you. This will take away the blue glow from the bowl.

At this point (or even some point prior) a crystal will appear in one of the four archways in the arena. Destroy it and wait a few seconds. This will bring the blue light back to the bowl and allow you to repeat the previous process again.

After you kill the wizard, you are finished with your first run-through of the dungeon.

Once you beat the Shattered Throne the first time and talk to the statue, head to the tangled shore and go to Four-Horned Gulch (A magical lift will take you there). Look for a glowing ball bouncing around in the air. It’ll give you a mission that is initially labeled “???”.

Accepting the mission will take you down into some caves where you’ll fight a lot of taken and specifically three taken bosses. Doing this will give you three tokens. These tokens are all named for the boss you need to kill to cleanse them. Said bosses can be found in the Shattered Throne Dungeon.

Back into The Shattered Throne

This is the tricky part.

Throughout the dungeon, there are statues of women holding orbs. four of these statues, however, don’t have orbs in their hands. To find the bosses you need to kill to cleanse the tokens, you need to find the orbs and give them to the statues.

The first statue you need to give an orb to is on the roof of the central (or tallest) building. The orb you need to give the statue is within the fire-breathing dragon temple. You can climb to the roof with the statue by scaling one of the rock-faces on the side of the building from the outside.

A great thing about these orbs is that one person does not have to carry the orb to the desired location. Just like the orbs in the “The Corrupted” strike, they can be thrown between your fireteam members. Be careful with your throws, however. Make sure the orb can make it to your team mate before you chuck it. 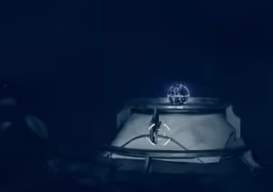 Another great thing about these orbs is that death does not make them disappear. If the person holding the orb dies, it rolls around on the floor and can be picked up by another member of your team.

Now, once you get the orb to the statue, dunk it into the statues hands. This will spawn the first boss you need to kill. It’s a straightforward fight with no gimmicks, so you’ll be fine. Killing him will cleanse your first token.

The next orb can be found in the platforming section later in the dungeon where you need to traverse the slim beams over a bottomless pit. This orb can be found around one of the platforms to the right of the entrance where the two ogres spawn. Facing the exit to the next area, the statue is against the right wall. It’s the only one without an orb in her hands.

Giving the orb to the statue does not spawn a boss, but helps open the door to the room where the next boss will spawn. Finish the platforming section and head into the long hallway where you are chased by thralls and are prevented from sprinting. Directly after entering the hallway, go right and up some stairs and you’ll see the bowl with the orb. Carry this orb through the entire section (tossing it between your team as needed.) When you exit the hall and drop down, turn to your right. The orbless statue is there against the right wall.

With these two orbs placed with their statues, a door will open on the other side of the huge pit up the stairs and through the archway. You’ll know this room by its circular shape with ANOTHER huge pit crossed by two bridges that connect via a small circular platform.

Walk onto the circular platform to summon the second boss. Killing this boss will cleanse your second token and you can continue with the dungeon as usual until you reach the Ogre boss.

Remember how I said to remember the process for killing the Ogre boss? This is why.

Collect the four orbs from the wizards as usual, but after you deposit them to make the boss vulnerable THE FIRST TIME, a cloaked minitaur will spawn across the room from the entrance. Kill him. he will drop the final orb. The statue will be on the left side of the room. Once you give the statue her orb, a smaller, weaker ogre will spawn. Killing him will cleanse your final token.

After you have all of the cleansed tokens and defeat the ogre boss, you’ll notice that the bowls in front of the statue with the bow will be lit. Talking to her now will give you the exotic bow Wish-Ender.

Something to take note of:

When my fireteam and I went after Wish-Ender, we found out that you don’t have to cleanse all three tokens in the same run. Once you cleanse a token, you have it, so feel free to take breaks. The dungeon also saves your progress based on whoever the fireteam leader is, so there’s no worry with leaving the dungeon to cool off during your run as long as you go in with the same person as the team leader.

The weekly Exotic item merchant Xur spawns in random locations around the world of Destiny 2. Xur Location and Inventory Guide Where is Xur Today? This weekend in Destiny 2 […]