This guide primes you in composing your team formation, covering the fundamental make-ups of a Corps Crew Formation and explaining characters.

Corps Crew Formations make or break an expedition. It defines the thin line between success and failure. This guide will serve not to dictate the manner in which you approach the game but is merely written to guide you fundamentally. We will go through the fundamental parts of a Formation and examples of characters befitting each key point.

This guide will not walk you through everything in the game tict-for-tact. It is here to give you a brief on what to expect and guide you in making better Corps Crew Formations.

There are three key points to consider:

This is your overall damage output considering everyone in the formation. Any character can contribute to the formation’s Damage.

Sustainability keeps teammates alive. Anything that can help survive another hit or resist debuffs is good enough.

Every character has a skill to improve and inflict stats by either improving (buff) or reducing (debuff). These are ideal for rendering buffs/debuffs useless. It is a good idea to have at least one Counter to deal with the disadvantages in your Formation.

The common approach is to dish out as much damage as you can per attack. The Ronin and Werewolf are popular choices just because of their damage outputs and easy skill combos.

Ronin brands a target with Strike! 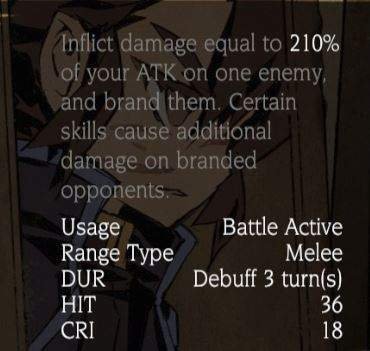 The Ronin’s Strike is one attack, the Werewolf’s Onslaught/Strike is another attack. This equals two per-hit Damage-outputs. The focus here is to quickly eliminate single targets and move on to the next available target. Since this strategy is reliant on the pair being operational, many formations are focused on either to add improvements or to support them through Sustain or debuffing targets. Fortunately, if the Ronin is unavailable, the Werewolf can also Brand targets himself with his Wide Swipe skill 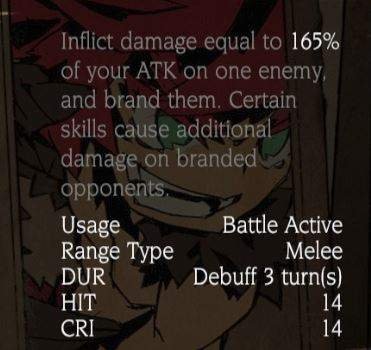 There are a couple of disadvantages to this – mainly the need to pick targets wisely while economizing on how best to distribute the damages, and in certain situations lead to a drawn-out and tiring battle. If 1 or more enemies are at low-HP, it’s as simple as eliminating them with two-actions, one per character. But if the desire is to eliminate them with just one action, then you may consider skills that target more than one.

Commonly referred to as AoE (area-of-effect), these skills can have multiple targets but with the drawback of a lower damage-per-target output. Ranging from the Shadow Blade’s Invisible Throw, to the Witch’s Chaos Blast, these skills are effective at withering down multiple targets or reaching targets that are otherwise not reachable.

Thus, the potential of AoE skills are not in damaging single-targets, but in either spreading damages or reaching otherwise unreachable targets by using a forward-target in-line with the AoE. If you desire to improve the per-target damage of an AoE skill, then upgrade it through Training Camp and as well equip said character with a good Weapon, preferably with Alchemized stats (ATK leaning).

The Witch herself is the main arsenal of AoE skills, and has the only skill so far available to you to damage enemies in a “cross” 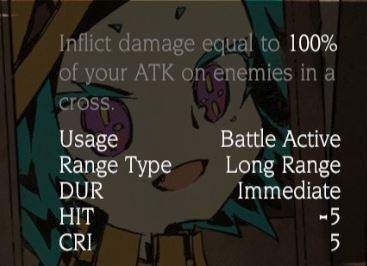 Whichever, damages can backfire if the target(s) have Reflection buff, which “reflects” a percentage amount back to the attacker. Usually it’s 25% and it may not seem like much, but sometimes it gets stacked to 180% and you might as well Guard. There are many ways to counter Reflection buffs. Bleed effects can automatically inflict damage on targets, and a couple of characters have Bleed skills in their set. Bleeds apply at 3 stacks of turns and deal “continuous damage” based on a percentage of the attacker’s ATK. Bleed damage triggers at the end of each of the inflicted character’s turn.

However, as of this writing (date: 10th of October), Bosses are just immune to every debuff in existence. Thankfully, bosses are not immune to the Witch’s Dispel Magic and Demon Reaper’s Stealing Luck skill, which can remove buffs. More on the two later, because they are one of the most effective skills in the game.

Sustainability falls into two categories – Keeping Hit Points from reaching 0 & saving from Limbo, and removing restrictive statuses from teammates. There are three classes that have the best set of skills for each category:

Most potent and only Healer-class. Exploration skill Prayer of Blessing can quickly recover everyone’s HP.

Holy Guard skill effective at reflecting damage targeting low-HP teammates (both incoming single-target and AoE damages). Divine Hands to sustain self from said damages, Divine Armor for free HP, and Holy Counter for another stack of Reflection and DEF-buff. The Paladin requires some forethought in the Sustainability roles.

Exploration skill Crush Obstacles can clear debris and is a necessity for when everyone in the Formation does not have enough HP to break debris (if you break debris without enough HP, your characters will die. The consolation is that you’ll get a Steam Achievement).

Unless you have a totally woke formation, the Sister will always be a part of your strategy. As she is the only Healer class so far, this is inevitable. Maybe this might change with new classes in the future (Mistover devs? wink wink nudge nudge).

With the Sister are four healing-skills. Love and Suspicious Love are single-target and heal a great amount of HP. At ranks 1, Love heals at 200% of ATK, and Suspicious Love heals at 266% of ATK. There are reasons due to your Formation set-up that will require you to pick either of the two. Inspect the imagery and note the positions allowed for each skill (white squares).

Examples are co-op skills like Sweet Feeling, which requires a Werewolf and Sister beside each other. In such Formation, if you were to locate the Werewolf to the front column, then picking Suspicious Love is the valid choice. 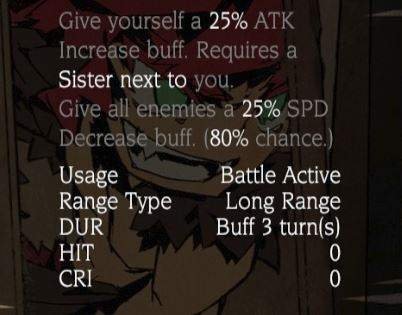 If you have both the Onmyouji and the Sister in your Formation, then place the Sister behind the Onmyouji to get access to the co-op skill Right Way To Love, which heals everyone in the formation. With this combination, if the Sister is at the back column, then Love is the valid skill to pick. 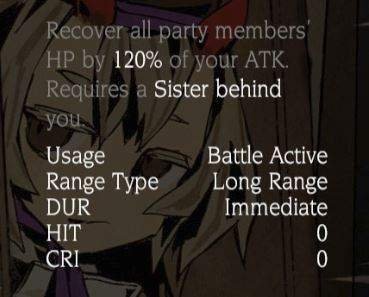 Overflowing Love and Prayer of Love are AoE versions of healing-skills. As expected, the per-target heal output is significantly reduced but at the advantage of healing more than one teammate. The only difference besides valid positions are the AoE ranges, with Overflowing Love covering for everyone in the formation, and Prayer of Love covering one column.

Overflowing Love (Rank 5) at left, and Prayer of Love (Rank 1) at right 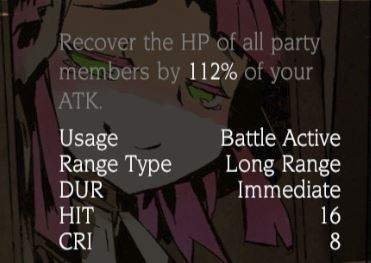 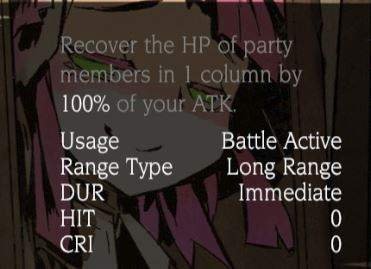 Lastly, the Sister has a few more useful tricks up her sleeves. Without bandages, you will need a way to cure Bleed effects. Stable Cloud is simple and serves this purpose. It cures a target of Bleed. The only drawback is that it doesn’t work on herself. 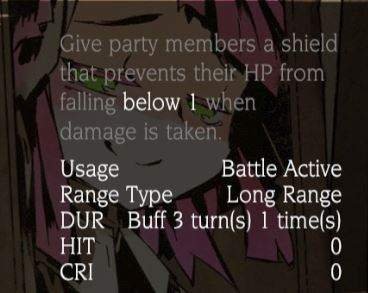 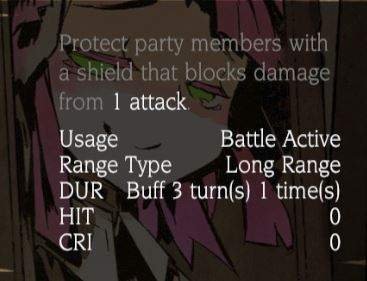 The Onmyouji brings with him an effective repertoire of skills to buff teammates and remove inflicted statuses. 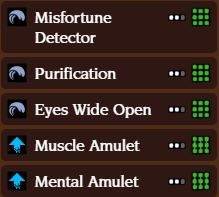 We will cover Muscle Amulet and Mental Amulet later (pay attention to Mental Amulet, because it is one of the best skills in the game).

As mentioned, the Paladin requires some forethought. The most important skill to help sustain teammates is Holy Guard.

It protects a teammate from harm and redirects hits to herself. Both single-target and AoE skills will be redirected, with an exception of AoE skills not redirecting if it is targeting either the entire formation or targeting an area that includes the Paladin. 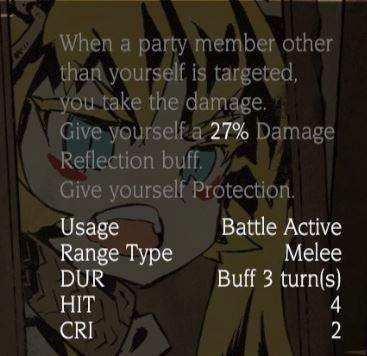 With Holy Guard, target teammates whom are Branded or are at low-HP and has no support from a Healer for the current turn.

However, since damage is being redirected to herself, you must have a Sustain to help her as well. In these situations, whereby a Healer has spent their turn, or there are no potions/bandages available, the Paladin can help herself with Divine Hands or Divine Armor, with Divine Hands recovering, and giving her an added HP recovery booster, and Divine Shield protecting her HP bar. With proper usages of her skills, she is the most valuable Tank in the game.

Every Formation will have a certain weakness, and it is a good idea to have Counters to cover those gaps. These can range from simply buffing teammates to debuffing enemies, skills that re-position self or other teammates, and even manipulating the Turn Order.

The Onmyouji will be our first example. We have talked about him previously, and there are two more skills to present – Muscle Amulet and Mental Amulet.

Both skills affect an entire column. Muscle Amulet is a straightforward ATK and DEF booster. Mental Amulet, however, has a powerful trick. 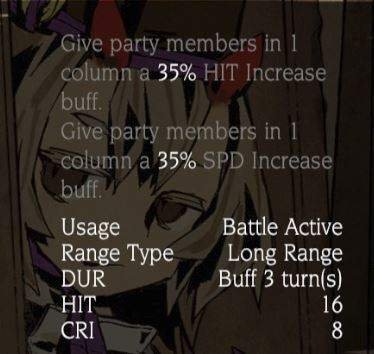 Mental Amulet increases HIT and SPD. This is important because the Turn Order is dependent on character SPD-stat. The characters with higher SPD in the current turn will act first

The trick is that SPD can be modified in-battle and will update the Turn Order accordingly. Skills like Mental Amulet are effective at manipulating it by increasing characters’ SPD. Refer to the .gif below and pay attention to the Turn Order.

The rationale behind manipulating the Turn Order just depends on whether you need a skill from (insert character here) to act first before the enemy does. Acting first is also the fine line between saving teammates or leaving with dead friends. There are a variety of skills that increases SPD in-battle. Experiment and use whichever fits your Formation strategy.

When it’s about dealing with stacked buffs like Evades, Reflections, and Shields, the Witch and Demon Reaper each have a single-target skill that can remove all said buffs from a target. 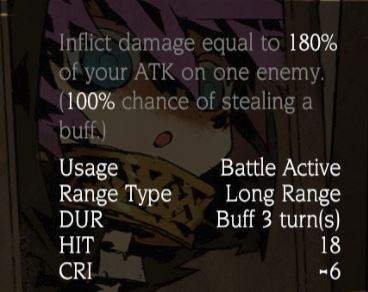 Executing this is straightforward. Select skill and select target. The buffs are removed.

Mistover – How to Kill The Great Worm (Easy Method)

How to Easy Kill Great Worm. More Mistover Guides: Beginners Guide. Team Formation Guide. Dungeon Mechanics per Zone. Preparing for a Dungeon (Gearing Up and Exploring Efficiently). How to Kill […]