Guide to getting all the achievements + Collectibles 100%

You will unlock these achievements automatically as you play along.

Ask For a Miracle

I’m pretty certain these three relate to the progression too but I still have to confirm them for myself.

These achievements are all pretty easy, if you know what you are trying to do.

In the first part of chapter 1, next to the statue of the fox, you will find some trees with fruit in them. While you are carrying a fruit in your arms, all boars (small and big) will follow you. Keep walking around and gathering more and more boar followers until you get the BIGGEST ARM… I mean, hum, the achievement.

Keep shouting at every light you see, and you will get this achievement pretty fast.

Jars in the Sand

Keep shouting at every vase you see. Most of the vases in this game appear in chapter 3, which is where you will probably get the achievement.

If you walk really close to one of these statues, they will crumble to dust. Keep doing it to every statue you see.

The Path of Light

At the end of chapter 1, shout at every statue in the maze, so that they all light up.
This achievement is mutually exclusive with the one below.

At the end of chapter 1,Solve the maze without ever shouting at a statue.
This is easier to do when you have already seen the maze once, and I suggest you try The path of Light achievement first before doing this one.
This achievement is mutually exclusive with the one above.

At the very end of chapter 2, on the long bridge, after you have pushed the gold ball back to where it belonged, run towards the guardian bird to give him a big nice h… oh, wait he killed you. Oh well, at least you got an achievement.

From the Sky to the Abyss

At the very start of chapter 4, instead of following the guardian , go the other way and find the corpse of the agressive bird you defeated at chapter 2. It’s a bit hard to find(Note: maybe add screenshots)
This achievement is pretty much mutually exclusive with the Racing achievement.

At the very start of chapter 4, get to the interior of the building before the sentinels can get there. Should be no problem if you know the route.

You can make it through the first section of the cave without using any bubbles. For the second part , you’ll have to use a bubble two rooms before the end.

Tips for getting this right.

I got this one in chapter 3 by looking at the wall paintings in the caves for a bit, and then finishing the underwater caves but it could also be by not shouting at the shadows blocking the entrance.

There are five Achievements related to collecting stuff.

Fox Toy
Hint: Chapter 1, in the starting area of the game.
Exact location: When you wake up at the beginning of the game, instead of running forward , go the opposite way. Parkour your way on the cliffs, where you should find the Toy somewhere half way to the top, on a ledge.

Seagull Toy
Hint: Chapter 1, in the starting area of the game.
Exact location: From the statue of the fox(the first puzzle set) go to the left and up the hill. If you continue in that direction, you will find some ruins pretty high above the ground. After a lot of parkour, you should be able to get to the top of the ruins, where the toy is placed.

Windmill Toy
Hint: Chapter 2, after the deactivation of the first windmill.
Exact location: After deactivating the windmill, go in the direction of the beach. At the rightmost part of the beach you will find a tower structure that is pretty high above the water and connected to the main land with a marbled bridge. Inside the tower is the windmill toy.

Bird Toy
Hint: Chapter 2, after the deactivation of the first windmill.
Exact location: Right behind the nest of the agressive bird at the end of the bridge, there is a building. If you descend down in the building , you will find a room with 6 lights and a big light in the middle. You can jump down from the middle part of the room, and parkour your way into a hidden chamber which contains the toy.

First Keyhole
Hint: The end of chapter 2, near the third windmill.
Exact location: After you’ve pulled the second block out of the windmill, you use that block to jump the nearest wall and escape the walled area around the windmill. If you descend that side of the island, the keyhole should be somewhere in one of the rocks on the side.

Second Keyhole
This one is pretty much not missable if you progress in the story.
Exact location: At the start of chapter 3, when you turn around in the neverending corridor, there is the key you need for the lock, and the keyhole is right behind it.

Third Keyhole
Hint: Third chapter, The area behind the underwater caves.
Exact location: After the underwater cave and the big square where all the creatures are gathered you come to the place in the screenshot below.
Instead of following foxy to the right, turn left. The keyhole is hidden between some vases. 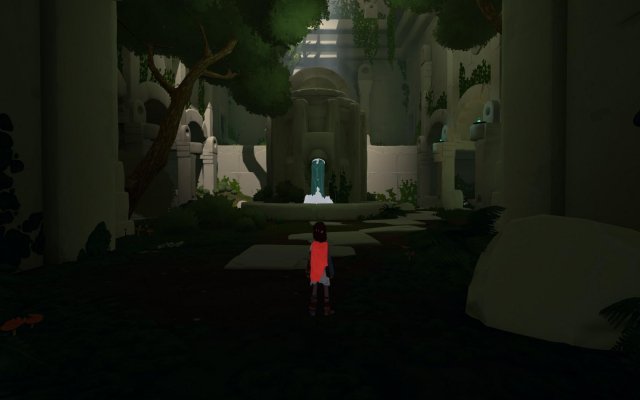 Missed most of these on my first playthrough.

First Lullaby
Hint: Chapter 1, starting area.
Hint: Near the fox toy, if you have that one.
Exact location: When you wake up at the beginning of the game, instead of running forward, go the opposite way. Parkour your way onto the cliffs now in front of you and at the top you should find the lullaby together with a great view across the sea.

Second Lullaby
Hint: Second chapter, after the deactivation of the first windmill.
Exact location: looking from the main entrance of the first windmill, go to the right of the windmill. There is a building that lets you descend underground through a set of stairs, and the lullaby is in a room next to a corridor there.

Third Lullaby
Hint: Chapter 3, when you have already assembled your guardian and are trying to awaken more.
Exact location: In the chamber with the many guardians, first solve the puzzle and awaken all the guardians. Drag the cube back to the middle platform so that the middle pillar slides to the left. If you climb up it, you should be able to start parkouring on the left wall of the chamber. On the first level, behind one of the places where a guardian stood, you can find the third lullaby.

These seem to be the most hidden things in the game…

Blend-in With the Surroundings

That Went too Far

What Lies in the Deep