Basics to tackle this not so hardcore zombie survival game. From a noob, to a noob.

Melee is your friend: it can dispatch noisy container waves with ease (as long as your weapon is up to level) it’s a arc AOE that’s good for moping up mobs damaged by 12 rounds but not dead, but beware: do not use it in night defense unless cornered as it destroys your barricades. 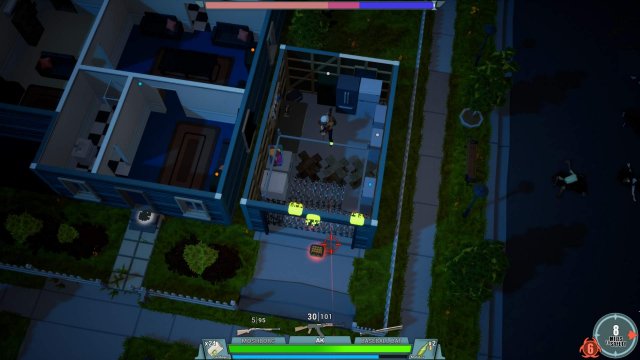 As the photo above shows, when sunset warning comes, ditch whatever task that’s at hand and immediately find a spot for fortifying. Good spots include: 2nd floor rooms without access stairs to the windows, garage, rooftops, whatever that has as less entry points for hordes as possible. You want the zeds to be funneled through a furious forest of barbed wires while you blaze them with 9mm rounds or 7.62 soviet fists.

Bad spots include: Church (you stupid man? so many windows=so many entry points=so many angry zeds eating your brain) 1st floor rooms that has a s**t load of windows (same as above, rapid ticket to hell) in the open (well, if you must, you might survive if you lock yourself in a corner or something).

Rules of fortifying: clear out the furniture, then barricade, then barbwire. furniture=fragile=breach=dead player. containers=invincible barricade=funneling=good. toss cocktails at entrance as the zeds begin to come in, barbed wires can’t catch fire. make sure you topple up your ammo at all times. ammo=lifeline. out of ammo=no zed kill tool=dead player set a second line of barricades if your first one’s looking bad. better be safe than be dead.

Bask in the morning sunlight and enjoy it, for it’s unknown when you’ll die. And thank god for giving you the power and will to fight this loosen hell.