Operation Headhunter is the first Special Ops mission in Call of Duty: Modern Warfare. Your goal is to infiltrate, expose, and eliminate the terrorist network of Almalik- AQ’s slumlord-in-chief.

However, it’s not just as easy as running up to him and taking him out. First, you must capture the various AQ Lieutenants around the area. There are six in total, followed by five Scramblers you must hack and disable, along with endless waves of enemies on foot, Juggernauts, and vehicles. You’ll want to coordinate with your team and practice.

It’s also a good idea to be mindful of your loadout before starting. Since the area is massive, you’ll be engaging in a lot of long-ranged battles, so having an assault rifle or LMG will do wonders. Likewise, utilizing the Overkill or Scavenger perks will help you, too. 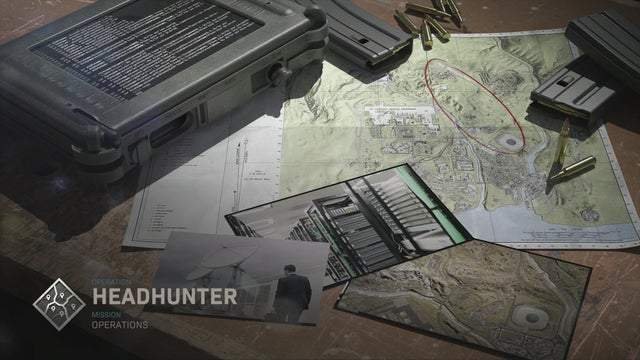 From the start, descend down the rope and head outside. You’ll find a four-wheeler you can drive to your first objective. Head to the building with the first AQ Lieutenant and go around the side of the building, through a window. 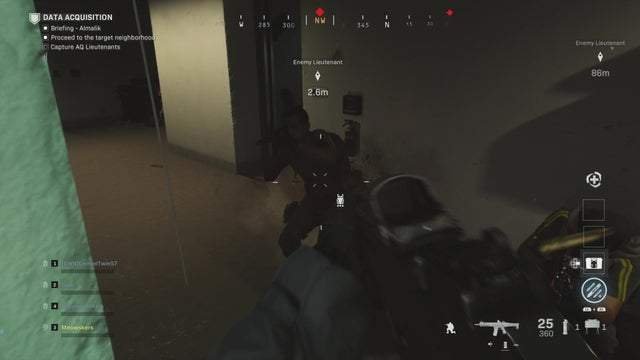 Take him out, grab the drive, and pick up any items along the way. Look out for Cluster Strikes and other aerial attacks, because you’ll need them to take out the Juggernauts.

When you’re finished, move to the next Lieutenant. Make sure you take out all the enemies on the way. Once you get to the next location, have two of your teammates go through the front door of the bar, and the other two go through the back. 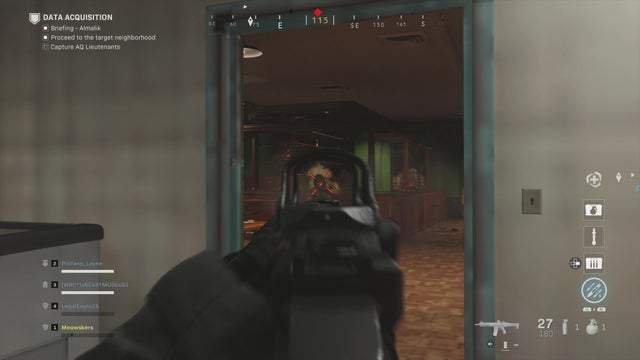 Take out the enemies here and head upstairs to defeat the next AQ Lieutenant. At this point, grab the drive and get ready for another set of Lieutenants. They’re both nearby.

One of them is on the lower level in one of the small buildings, while the other is in the larger building towards the back. When you’re ready to take on the one in the building, head inside and to the left, where you’ll come to some stairs. Don’t go up them. Instead, move off to the back left corner of this room and pick the enemies off as they come down. One of the Lieutenants is a suicide bomber and he has two buddies with him, as well. 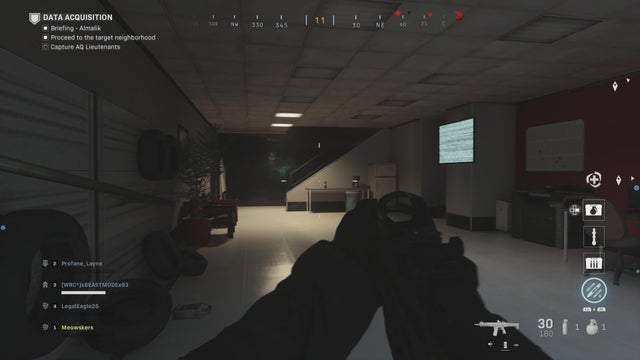 After you take them out and grab the drive, you’ll be ready for the last two. Head outside and again, be on the lookout for items. They’ll really come in handy later on. In fact, make sure your whole team grabs useful items like the Cruise Missile.

At the next location, you’ll have to fight a Juggernaut, so hopefully you’ve picked up something you can use on him. Otherwise, fill him full of lead and don’t forget to pick up the drive. 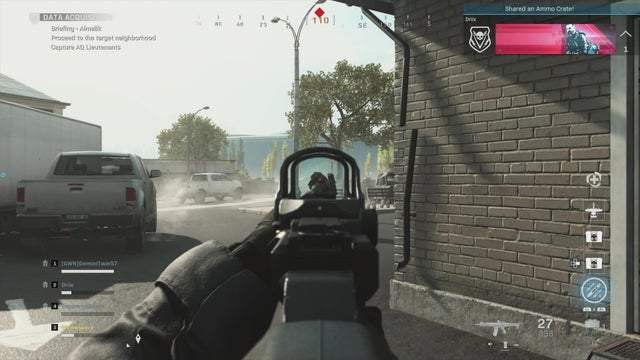 Then, go inside the nearby building to take out the last Lieutenant. Once you’ve captured all six, you’ll be prompted to get to the stadium. Use the nearby four-wheelers to do so.

Hack and Disable the Scramblers

Here’s where things get tough. The goal is to make your way around the stadium, hacking and destroying the Scramblers. You’ll have to fend off a lot of enemies in the process. Now might be a good time to have a buddy die and land on the roof of the stadium to act as a spawn beacon. 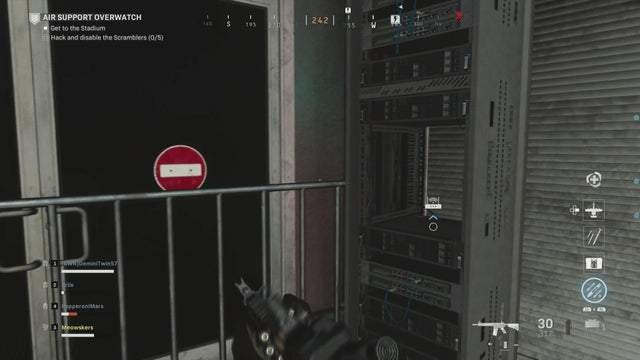 You’ll have to interact with the Scrambler and then wait nearby while the bar fills. The more teammates nearby, the faster it will fill up, so try and gather around when you’re hacking. After you hack it successfully, you’ll need to destroy it. The first one isn’t too bad since there’s plenty of cover nearby.

Once you take the first one out, make a sprint for the second one as fast as you can. If you have someone on the roof, they can take out many of the nearby enemies while you make your way to the next Scrambler.

The second one is significantly harder, since you have to take out a Juggernaut to get to it. Now’s a great time to use a Cruise Missile or something similar to take him out. 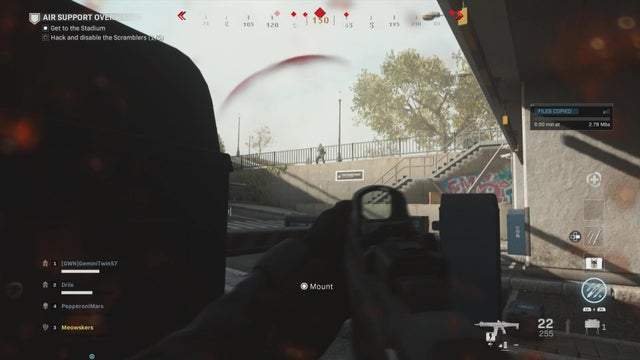 Head down and hide right next to the Scrambler as you hack it. Make sure you’ve got teammates nearby for backup. Once you’ve destroyed it, carefully make your way to the next one. It’s really easy to get tripped up on this part since you’ll be running out in the open. Try your best to get back to the stadium where there’s lots of cover.

From here, keep making your way around and be sure to stock up on ammo if possible. This next Scrambler is really tough. You’ll find a few RPGs nearby, so have someone grab one because you’ll need it for later.

Hack the next Scrambler and be cautious of the Juggernaut that spawns ahead. If someone on the team has a Cruise Missile or a similar item, now’s a good time to use it. 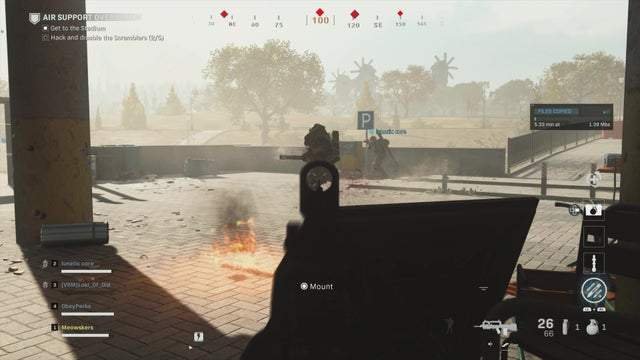 Next comes the really hard part. After you disable the Scrambler, you’ll be faced with several tanks to destroy. You’ll have access to a Gunship, which will be extremely useful for taking the tanks out.

It’s possible to destroy all of them with the gunship, but if you miss one, use the nearby RPGs to take out the rest. You can use a Cluster Strike here, but remember, you’ll need items like these later on, so be mindful.

After you take them all out, you’ll be ready for the next one, which is tough, but at least you won’t have to deal with tanks. This Scrambler is down in the parking lot, so there’s plenty of cover for you. And if things get rough, there’s a nearby parking garage ramp that leads down tot he right of the Scrambler where you can hide. 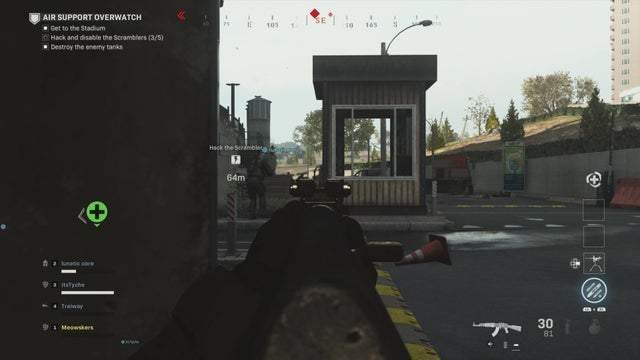 Hack the Scrambler, and use the nearby cars for cover. It can be tough since there are so many possible directions an enemy can come from. Again, if you have your whole team nearby, the hacking process should go quickly.

For the last one, you’ll want to give it everything you’ve got. Not only will you have very little cover, but you’ll also be bombarded with smoke and multiple Juggernauts. If you have someone on the roof, right now is a perfect time to call in a Cruise Missile or something similar. 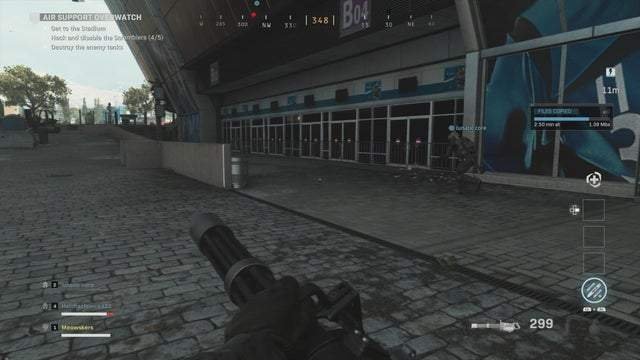 You’ll also want to watch out for more suicide bombers, like from before. It really isn’t recommended to simply sit near the Scrambler and unload on the Juggernauts with regular ammo. Rockets, special weapons, grenades, or any other type of explosion will help tremendously here.

Shoot Down the Enemy Helicopter

You’ll then have to take out a helicopter. If you have Cruise Missiles or something similar use it now. Otherwise, grab an LMG or the Jokr to take out the chopper. Once you take it out, you’ll be able to extract via a helicopter of your own.

The key to this level is to stick with your team and have someone stay on the roof as backup, just in case. These levels can be really cheap, so cheesing the spawning system is the way to go.

Call of Duty: Modern Warfare – 2XP Token Guide (How to Get and Use It)

Call of Duty: Modern Warfare – How to Use Attachments