Basically a low-key way to cheese your way to the top using stealth skill.

So You’re Having Trouble Leveling Up?

With it you can essentially cheese your way up to lvl 20 nice and easy. It’s a simple skill called stealth. 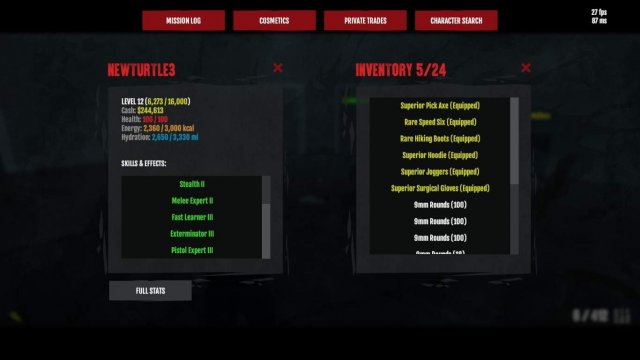 How Does It Works

With stealth you unlock several abilities:

I think i should elaborate more on crouch. When you’re crouched you don’t make any noise when sneak moving or meeleeing enemies (guns still make noise. Infact they got a range on the description).

When you’re crouching you can literally walk over any zombies that are lying down and they’ll be none the wiser. As for the zombies standing up they’ll only notice you if you get within their line of sight. I have experimented and sorta get the idea that at low lvls it’s about a 90 degrees being split 45 degrees with their eyes being the line in the middle. However with more sneak or less visiblity range you can actually get in closer and the line of sight angle becomes smaller (around sneak lvl 3 you’ll start to notice this more).

When entering a room, it’s important that you enter crouched. Sometimes zombies spawn facing you directly. They’ll target you as soon as the room loads. They may even rush you in higher lvl areas. Being crouched ensures that you don’t alert the other zombies though. You can just take care of that 1 alerted zombie and then chain kill/incapacitate the rest afterwards.

When zombies are not aware of your pressence you can land a sneak attack. One of 3 things happens:

The % chance zombies will be insta killed or incapacitated depends on other factors like the zombie type, normal or special infected, your lvl, and sneak lvl as well as other skills but general say a lvl 1-4 lvl 1 stealth player and just kick it up from there:

This is again only with a lvl 1 stealth at lvl 1-4 for your character. Once your each lvl 5, more damage and clothing stat items, and inc. stealth then you’ll be able to insta kill up to non-irridiated special infected zombies and below easily.

Wonky Mechanics and How to Utilitze Them

There are a couple of ways stealth can be “utilized” with the way it’s setup. This can be said by many other skills tbh.

Once you invest even 1 pt into stealth you can unlock a whole new strategy and tactics. You can loot higher red lvl’d areas (from 10 lvls to higher depending on your other skills and damage stats).

Tbh i’m able to chain incapacitate then kill or chain kill multiple higher lvl zombies easily in lvl 20+ areas with as low as a lvl 5 character. You can pretty much make looting and gaining massive xp amounts much easier.

Best part is that you waste little to no ammo since insta killing or incapacitating zombies with melees is extremely efficient.

It also works with bosses.

You can incapacitate or kill any zombie without alerting the mutant bosses (yes even juggernauts and tendrils won’t be none the wiser). This small plus can help you get a footing for setting up the arena for killing the boss. Also helps if in a party so people can position themselves at the doors so no more zombies will spawn (though it’s pretty useless on chiors it works for literally any other mutant boss).

When crouching bosses are also less likely to notice you meaning you can enter after everyone else and they won’t directly go after you (as it happens about 5/7 times they always seem to target the new person who enters the room).

Killing area level 10 bosses for the sake of experience, while also getting decent loot. Other Dead Frontier 2 Guides: Beginners Guide. How to Play Online with Friends. Gameplay Tips. […]

Dead Frontier 2 – How to Play Online with Friends

Basically you should look up in lobby select screen if your friends aren’t in the same place as you, you won’t be able to join them, if they are you […]

How to move fast with Stealth lvl 1. Other Dead Frontier 2 Guides: Beginners Guide. Gameplay Tips. Transition Guide. How to Play Online with Friends. How To Cheese Stealth Straight […]