General Skillset Guide for New Players. Decided to upload at this point because a lot of my friends didn’t understand what moves were worth taking on certain characters and for people who are struggling with figuring out what to take in general. 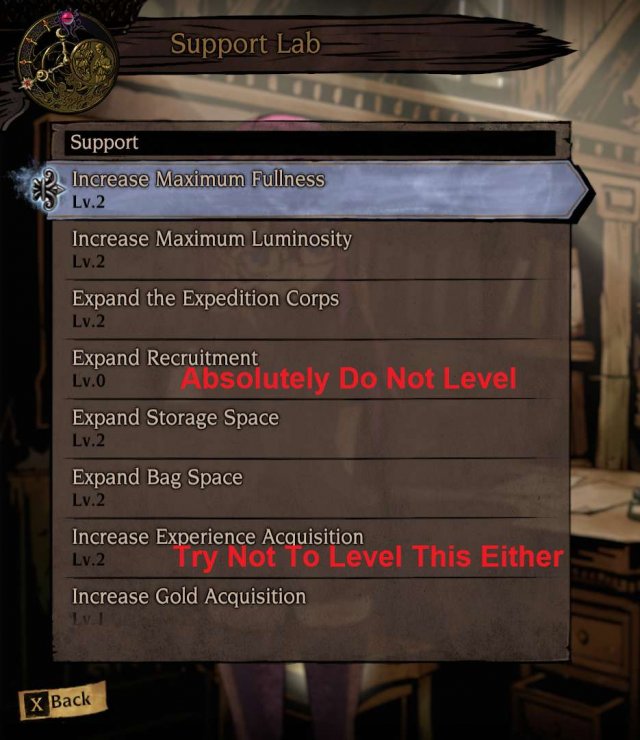 Both of the support upgrades here are traps that will force you to start a new game. The design of these two seemingly helpful upgrades really boggles my mind. New players will unknowingly upgrade these not knowing that it will be the reason why they can’t continue playing after a frustrating teamwipe.

To elaborate on this: Expand Recruitment muddies your recruitment slots with worthless, overleveled, and overpriced buyable units. Many of these recruits have their skillpoints randomly allocated and sometimes are flat out missing skill points.

That being said, you are better off sticking to recruiting level 1 units and having a higher level unit carry them through lower level dungeons to level them instead. The doomsday clock penalty for having an overleveled unit is a -1 tick but it can be easily mitigated by getting +1’s from

Increase Experience Acquisition is an unintuitively bad upgrade for your playthrough. You may think that leveling your Heroes faster is a good thing, but as I stated before, the game punishes you for bringing overleveled characters to an area. On top of that, character level scaling in this game is piss poor. This means that even if you enter into a dungeon with a full party of level 7 characters into a maximum level 5 dungeon, you have a large chance of being absolutely teamwiped. You may be asking why at this point.

Equips are the foundation that this game balances enemy encounters around. If you go into a level 4-5 dungeon without any weapon or armor equips, you might as well be going in with level 1 characters.

This game expects you to grind equips without telling you to do so. THIS IS WHY NEW PLAYERS QUIT BEFORE THEY EVEN START.

With that being said, you actually have to farm for decent gear/equips before heading off to harder areas. Not upgrading your EXP gain allows you to spend more time in certain areas to potentially find the gear that you need inorder to have enough of a powerspike to progress in your game safely. 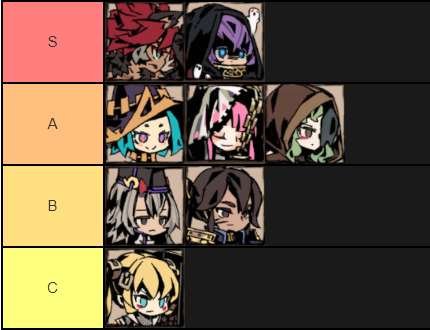 As you’ll quickly figure out, the center column is mainly for your damage dealers with few exceptions. The main reason for this is due to how the positioning restrictions on certain skills work. The middle column allows heroes to have access to their full skillset if need be.

Additionally, it is worth noting that certain characters fill specific niches depending on the maps that you are playing.

For example: the Witch and Onmyouji’s exploration skills make them critical to parties once you reach the Cursed Town region and later. The Witch saves you time and steps when you inevitably step into a far reaching dead end and the Onmyouji’s trap detection+disarm will save you headaches from the more severe trap penalties later on.

Frozen Mountain: There are traps that darken and erase your current dungeon run’s exploration data.

Unfortunately the Paladin class is just not very good.

If you’re dead set on using her however, she’s most likely going to be relegated to the front rank due to how valuable the middle column is for your team. Despite losing access to some very valuable skills, the Paladin cannot justify taking up a middle rank.

The Onmyouji Class is better than the Sister in the later stages of the game in terms of overall combat effectiveness despite his lack of intrinsic damage. He has great offensive buffing, AOE crowd control in Paper Koi, and is all around a great support.

His issues lie in that he’s specifically late game oriented and will provide almost nothing for your party in the early stages of the game. His buffs are great but if your core damage dealers aren’t strong enough to make up for his complete lack of self sufficient damage, then the Onmyouji will be more of a liability than an asset.

His lack of a basic healing ability makes it so that he is incapable of rescuing a Limbo’d character aside from spending his turn giving a potion to said character. This one shortcoming makes it so that you are still forced to take a Sister along for the ride despite signing on an additional support character.

Overall the Ronin is a fairly fragile pseudo-tank. He doesn’t take hits very well and relies on allies like the Onmyouji’s or Werewolf to give up their turns to assist in buffing his rather weak defensive stats.

The Ronin isn’t great in this game because his moveset is muddied by AOE and self-buff abilities that are a waste action economy. For the most part, the majority of Mistover will be played with 1 healer/support and 4 damage dealers. Tanks don’t really exist and you really don’t want to taunt unless you can survive up to 5 consecutive enemy hits. That being said, the Ronin class is really not that durable when compared to the likes of the Paladin. He is meant to be an evasion tank but spending a turn to buff evade for 3 turns is a rather waste of action economy when he can cast Strike! every turn instead.

Strike! is Ronin’s least committal and safest damaging ability. It has a high crit and hit modifier meaning that it will often grant you full YP even without getting last hits. It can also reach every tile. Bloodthirsty Sword is a fantastic damaging ability with lifesteal attached to it, but the Taunt that is applied can be detrimental to the safety of your Ronin if you do not spend actions beforehand buffing his defensive stats like Evade/Defense/Guard. 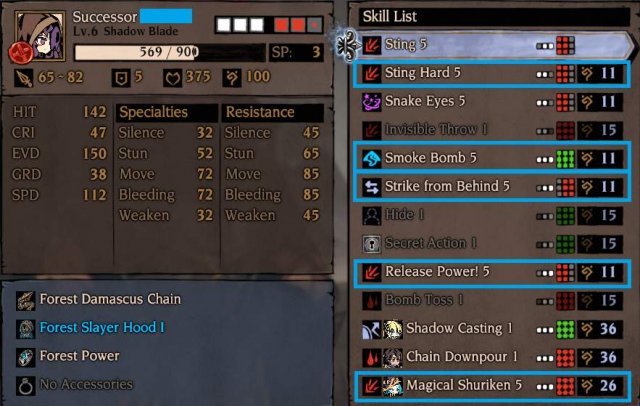 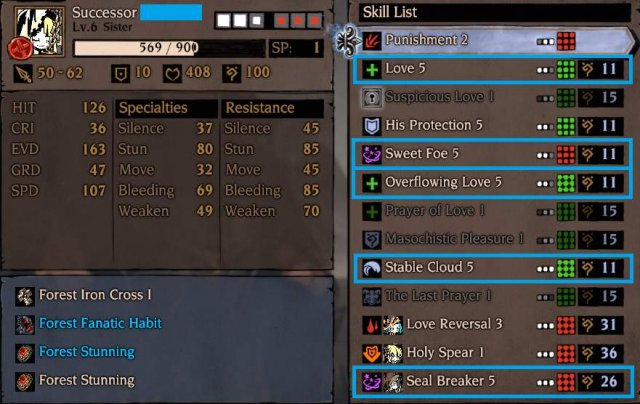 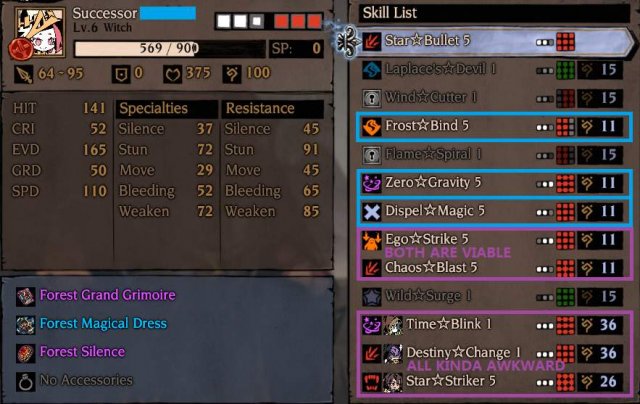 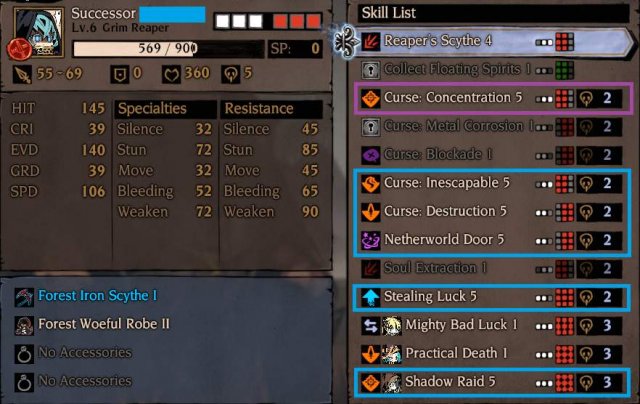 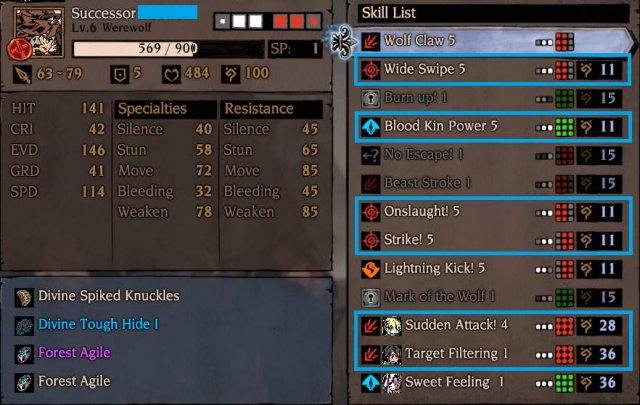 You’re better off seeing level 1 recruits than higher level ones with their skillpoints randomly used.

With the newly implemented system of Skill point inheritance you can build extremely powerful units at a very low level.

To do this, you have to somewhat understand what you’re looking for. I will be splitting this part of the character into 2 types of units. First the base unit and second, the fodder.

The fodder unit should have 1 desirable skill that you haven’t already fed to the base unit. You have to level this unit to 5 in order to obtain enough skill points to level the desirable skill to 5. Please note that this is quite gold intensive and is not recommended to be done if you do not have a sufficient surplus of gold. It takes 3750 Gold to level a skill from 1 to 5 and another 2000 to fodder off the skill to the base unit.

It should also be worth noting that Team Attacks are also inheritable but are awkward due to the randomness that their 1st levels are obtained at specific level intervals of characters.

Although this is the starting region, it is worth noting that certain classes are less useful than others due to lacking skill points and levels. I would recommend not using the Onmyouji class for the 1st region due to the class’s inherent lack good damaging abilities. On top of this, his buffing capabilities will likely be hindered due to being underskilled.

Sisters and/or Onmyoujis are recommended here due to the abundance of enemy bleeds. The Black Goat type enemies are particularly annoying and should be dealt with as a priority. Your damage dealers can consist of any combination this early in the game still. I personally like the Witch+Shadow Blade combination as the Magic Shuriken team skill when maxed is great at bruising the entire board in 1 action.

The Grim Reaper becomes quite good from here on forward. Bosses and enemies in this region will often cast buffs that the Grim Reaper can steal regardless of hit or miss. Also worth noting that barriers/shields count as buffs which can also be stolen.

Onmyouji and Witch are both must haves to save you from potential headaches. The traps in this region can be avoided with patience, but I recommend just taking an Onmyouji to just save you the extra turns. There are also a lot of dead ends and winding paths that the Witch will save you time with her exploration skill.

Grim Reaper is a must have if you want to hit anything. She can also steal the final boss’s barrier to give herself a 5000+ hp shield.