As a player with over two thousand hours of small herd and solo para, I feel like I’m the right guy to give y’all some tips on how to be an effective Para player, not only for yourself, but for your herd too, no matter its size.

As a Parasaurolophus it is integral to know the basic weapons and strategies at your disposal. As a large herbivore that relies on migration to avoid dangerous carnivores you should take care not to stay in one place for too long, as it will attract large carnivores such as Tyrannosaurus and Acrocanthosarus, which are threats to Parasaurolophus, even if you are in a large herd.

I can generally advise that you herd up with other herbivores of your size, such as other Parasaurs or smaller herbivores such as Pachycephalosaurus. It may be tempting to grow nearby Apatosaurus, the large sauropod, but in the long run this will attract many carnivores looking for a meal and likely end up with you in danger. I can also advise against herding with players that don’t have a solid plan put in place when it comes to carnivores arriving, as it may end up in you being in an exposed position.

As a Parasaur you have four powerful and somewhat unique abilities at your disposal, the first being your alarm call, activated by your ability key (usually defaulted to Z or Q), the Alarm call highlights any carnivore within range that you aim at with the cursor, giving your herdmates a heads up that danger is nearby. I advise against spamming this ability however, as it will make you a target, it is smartest to use this once or twice to get your herds attention, rather than during an already active fight, as it wastes ability pool that could be used on your second ability, the stomp.

The stomp is Parasaurolophus’ most powerful attack, although it stops your movement for the duration while you don’t have any points placed into turn while stomp. The stomp does a reasonable amount of damage and injury upon a successful hit on a carnivores body, even without power talents. It however takes up a significant portion of your ability pool and must be used when you are certain you will land the hit, to avoid situations where you are left without any ability pool left and a carnivore biting down on your face.

Your final ability is the ability to graze while moving, holding the interact key (defaults to E) and moving in any direction will have your Parasaurolophus automatically eat any plants available to it while it walks. Like the crouch, you can also sprint while doing this, which makes the para the ultimate migration herbivore.

With these abilities in mind, let’s get into the talent point builds.

Generally if you are a new player, you don’t really want to get into combat right off the bat. For your first few Para playthroughs I can recommend speed para, building for surefooted and strong legs to bolster your already amazing uphill and downhill movement speeds and then through stamina pool and nimble footed into speed, stamina pool so you can run for extended periods and nimble footed to give you added turn rate, which will be useful against Megalosaurus, a fast medium sized carnivore that can be a large threat to newer Parasaurolophus players. Speed increase will help get you away from dangerous carnivores such as Acrocanthosaurus and Tyrannosaurus.

By the time you finish these talents you will already be 0.8, so close to 1.0! However there are more talents you can take as you grow, such as going into sneaky to get both clotting and turn while stomp, sneaky being incredibly useful for avoiding Tyrannosaurus and turn while stomp making it easier to hit those pesky Megalosaurus players with your stomp, which can easily cripple a Megalosaurus and allow you to escape with little issue, as the injury damage you inflict should you hit their body with the stomp should easily make the Megalosaurus slower than you.

Attached to this section is a visual guide. 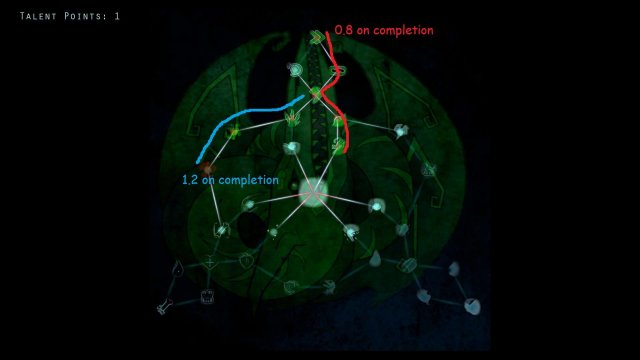 While speed Parasaurolophus is good for new players, you will quickly notice you lack the raw strength to deal with more than one Megalosaurus attacker at a time and will struggle or entirely die when fighting Acrocanthosaurus and Tyrannosaurus. This build fixes two of these problems (although, still be weary about engaging large packs and avoid Acrocanthosaurus fights where possible), unfortunately Tyrannosarus is simply too powerful to fight one on one as a Parasaurolophus, but you will be able to avoid them if you pay attention while playing this build. The issue with this build is primarily the vulnerability you have while under 0.8, due to the lack of speed to get away from things, however past 0.8 and well into 1.2 you will find that you can battle one or two Megalosaurus players at a time, almost certainly beating a Megalosaurus in one on one combat.

Firstly you want to specialise into ability pool and strong bones, ability pool to increase the amount of times you can use the strong Parasaurolophus stomp (which is heavily improved by this build) and strong bones to reduce the amount of injury damage taken (and as a result, speed lost) when in combat. You then want to go through healthpool increase, a powerful talent for the already decently tanky Parasaurolophus, towards damage increase and bruiser, Damage increase giving the Parasaurolophus stomp a respectable bonus to its base damage and Bruiser causing you, when it’s maxed out, to deal injury even on tail hits, meaning if you miss a body shot with a stomp, you still deal that much needed injury damage!

By the time you max out bruiser, however, you will be 0.8, after which you should start specialising into clotting, to combat Acrocanthosarus’ bleed, a powerful debuff which stops you from healing, Turn while stomp, which allows you to more easily aim your now debilitating stomp and sneaky, which allows you to avoid Tyrannosaurus a lot easier.

The Talent build is attached below. 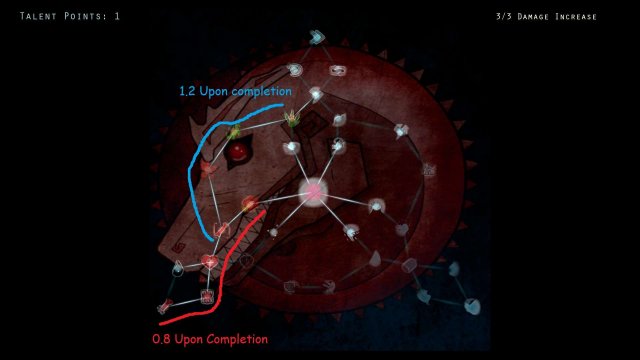 For either build as a Parasaurolophus you should never turn and run if your predator is already on your tail, as they can easily remain on your tail and nibble away at it, slowly but surely reducing your health to zero. Rather, if it looks like a fight cannot be avoided attempt to get on the rear of your attacker, headbutting them with the primary attack key (Default: Left click) and hopefully stacking up injury to easily land a stomp. Make sure not to waste ability by using the Alarm call, your herd will already know you are being attacked by the dinosaur pain sounds.

Rather, you should headbutt them a few times until you think you can land a stomp, at which point you should immediately try to, as on either build it is your most powerful weapon. Always however try to remain behind your predator, the Parasaurolophus is tanky, but not against a Tyrannosaurus or Acrocanthosaurus bite. This tactic primarily works for Megalo and Acrocanthosaurus, but in the unfortunate event you are forced to fight a Tyrannosaurus in one on one combat, sticking to the headbutt and avoiding the front end of the Tyrannosaurus is your best bet.

Against Velociraptors, attempting to headbutt them when they leap at you is a good idea, so is suddenly stopping if they are riding your ankles, and using a stomp. Either way you will instantly kill the Velociraptor under most circumstances.

You will find that once you kill a few carnivores (your kills will likely mostly be Megalosaurus and Velociraptor) however, that they will start recognising you and leaving you alone, as you are too dangerous to go after reliably. The best way to avoid being hunted is to be dangerous to hunt.

Beasts of Bermuda – All Semi-Aquatic and Marine Tunnels Guide

This guide will be a very basic, line drawn tunnel guide, that will help players starting out on the Marine tree or who want to eat something other than Megalos […]

Beasts of Bermuda – Guide to Tyrannosaurus

How to survive as the Tyrannosaurus, tips, tricks, and insiders on the creature for the most efficient living experience. Other Beasts of Bermuda Guides: Guide to Mosasaurus. Guide to Apatosaurus. […]