This guide in intended to improve your overall Witcher 3 experience.

How to Improve Experience

Brush Up on the Story So Far 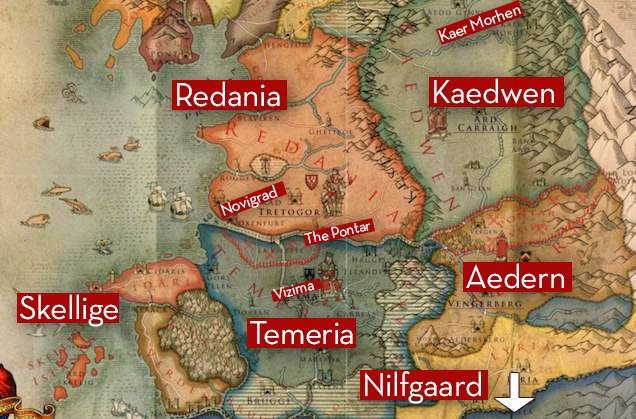 In Witcher 3: Wild Hunt you are faced with many small choices. Which sword do you want to use? What character you want to befriend? Who you want as a potential love interest? Other than these small choices there are a lot of things to keep track of in Wild Hunt. Let’s focus on what’s going on around you. For example, look at the map above. Try to familiarize yourself with it because after you finish the opening chapter in White Orchard, a character will talk to you about the current state of the world so if you know the different places in said world this will help you really understand what hes talking about.

Make Sure To Read Quest Logs and Updated Character Entries 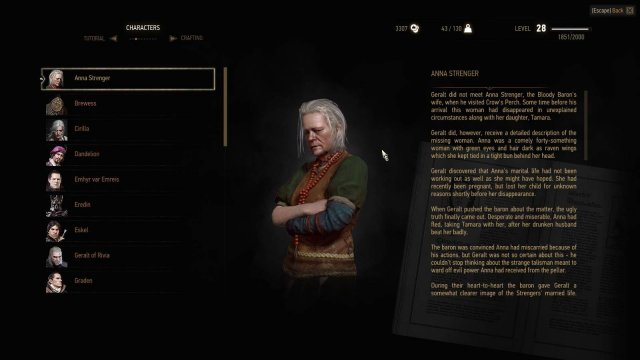 The game’s quest logs and character entries are both written by the bard Dandelion, and can be really helpful for keeping track of what’s going on in the story. They’re updated as the story changes, so check in on them regularly to see what’s new. 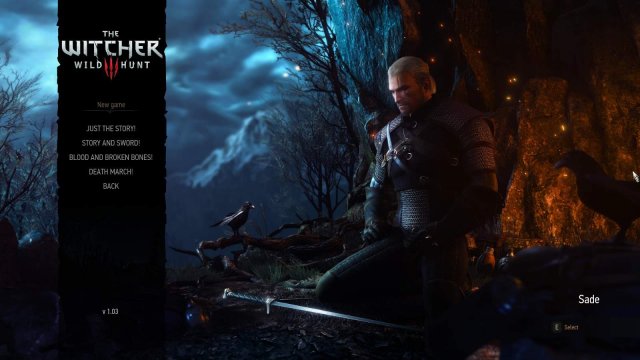 Wild Hunt gives you the choice of four difficulty settings. I personally recommend playing on “Blood And Broken Bones” Difficulty This makes the game more enjoyable overall even though it sounds pretty scary. On lower difficulties the game starts out hard but you will be destroying enemies in no time. If played on lower difficulties you’ll never feel like a Witcher because you won’t have to use signs or oils, and your health regenerates quickly out of combat.

Loot and Steal Everything!

In most buildings, you can simply walk in, use your Witcher senses, and start taking everything. People and guards will only get mad at you if you take things while in sight of the guards.

You’ll fight a lot of monsters over the course of Wild Hunt. Most of them leave loot, which you can then use for crafting or sell to vendors. Loot every monster you kill. Never leave a contract boss-monster, large roaming beast, or destroyed monster nest unlooted. Those give you the best, rarest stuff. 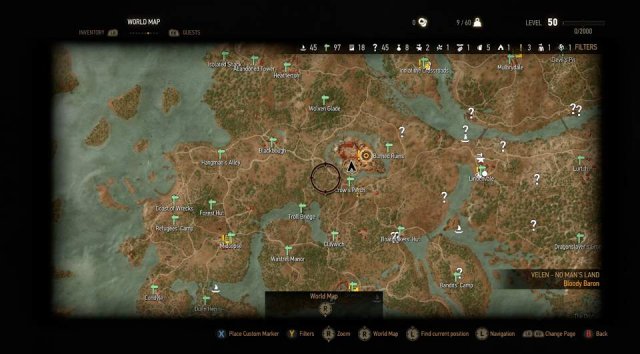 In the opening area of White Orchard, make sure to explore every question mark or at least the majority as this will make sure you come out with a good amount of XP, equipment, and skill points.

Don’t rush through the main quest line, make sure to visit Notice Boards to open up a whole bunch of cool side quests.

Places of Power are probably one of the most useful things you can find on the map, these will help you level up you skills before you even level because everytime you find one of these they give you a skill point to spend or save. They also enhance your signs.

Pay Attention To Your Gear

Make sure to keep your gear fully repaired and “Enhanced” this will make sure you’re hitting as hard as possible and that you can take more hits. You can do this at a whetstone and an armor table. Another helpful thing is that you can repair your gear in combat so never fear if your silver sword breaks when fighting a Werewolf. Just pause and repair!

Make Roach The Best Horse He Can Be 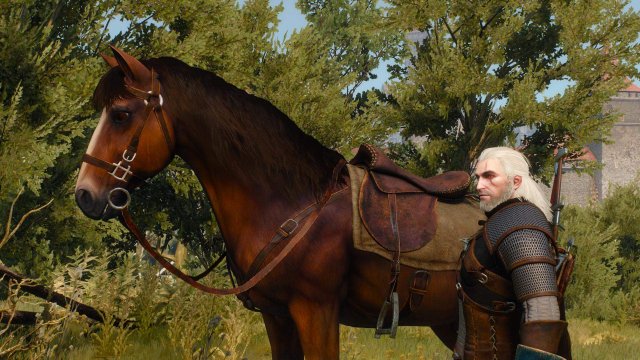 Buy saddlebags and blinders for Roach, as soon as you’re able to comfortably afford them. Saddlebags increase Geralt’s carrying capacity, and blinders make it easier for you to fight from horseback without Roach freaking out.

Make sure to keep your original Witcher Gear because you can upgrade it later on in the game.

Merchants Level With You

You don’t have to worry too much about which vendor has Silver Ingots and which sells Meteorite Ore. Merchants will actually “level up” along with you, meaning that once you need to craft more advanced stuff, all merchants will have the materials you need for sale.

When choosing where to spend your ability points, pick carefully at first. I suggest leveling up your “Muscle Memory” light attack boost first. 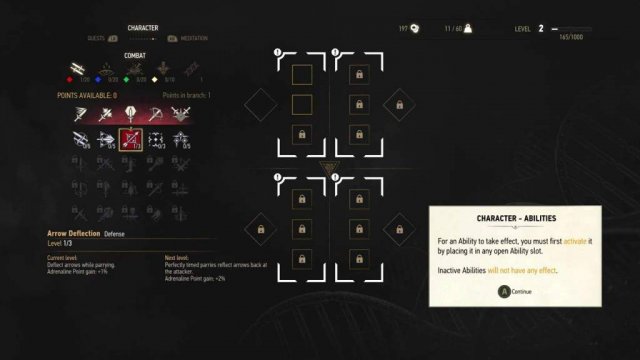 For the love of god, match your Mutagen colors! You get HUGE bonuses for matching Mutagens with skills. You can craft better Mutagens for even bigger bonuses. 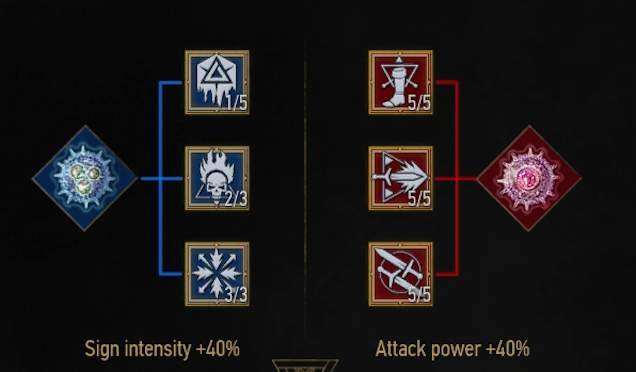 Make as many as you can early on because once made, you have it forever because when you run out just meditate to refill everything.

Meditating is one of the most helpful things in the game. Lets say you have Swallow Potions but you only have one left, just meditate and boom you have all 3 ready to go.

Before and During Combat

Prep and Cast Quen Before You Fight

In Wild Hunt, you’ll almost always see enemies before they see you. That means you can pause and prepare for each fight. Apply the necessary oil to your blade, make sure you have the right items equipped and, most crucially, cast a Quen shield before you enter combat.

Take Out Enemies One At A Time

An obvious tip, maybe, but a good one. You’ll often find yourself fighting a pack of enemies, be they ghouls, wolves, or humans. Focus on killing one enemy at a time. The fewer there are, the easier it is to manage the others.

When in combat, you should almost always be parrying. The ability to stagger an enemy is crucial to winning more difficult fights. Remember to try and time your parry so that it staggers the enemy.

If You Knock An Enemy Down, Kill Them Immediately

When an enemy gets knocked down, you can insta-kill them.

You’ve got two evasive options in combat: A quick dodge or a longer roll. As much as I love rolling, it uses a significant amount of stamina, if you use it too much you won’t be able to cast as many Signs.

Aside from when you are made to shave, you get to choose when you shave Geralt’s wonderful beard or if you want to keep it forever. Although I think its cool to see it grow as you play so I tend to keep it shaved. This way it really gives you a sense of time and how long you’ve been playing. 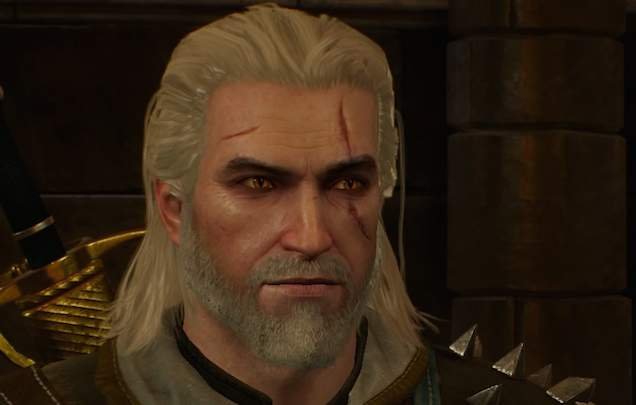 Some sidequests do get locked so if you want to do a sidequest make sure to do it before leaving an area or progressing through the story too far.

Last and Certainly Not Least… Take Your Time

Take your time and don’t rush through the main quest line. You’ll get the most enjoyment if you just take it slow, explore, and take in the world you’re in.