Details on costs and revenues for each mode of transportation in vanilla Cities Skyline.

Public transportation in Cities Skylines is very important to ensure a smoothly working city. A well designed system takes traffic off of the roadways which allows Cims and Services to go about their business.

However, public transportation can also be very expensive. This guide is intended to document the financial impact of each of the transportation modes in vanilla Cities Skylines. While it may not be possible to have all modes MAKE money for your city, an understanding of the basics will help to ensure that they don’t become a money pit which drives your city to bankruptcy.

If you think about Transportation as a ‘mini-business’ within your city, then you can begin to consider a simple ‘Profit & Loss’ statement for that business with the following inputs:

Each transportation mode has different values but those values fall into one of these three categories.

From this you can establish three key metrics in order to evaluate your performance:

This guide focuses on three of the most frequently used modes of transportation. Others will be added in the coming days.

The total passenger count can be found in the transportation Info View:

From this window, clicking on the desired mode shows the detail by line (in this case – buses):

Then, from this window, clicking on the magnifying glass of each line shows the line detail: 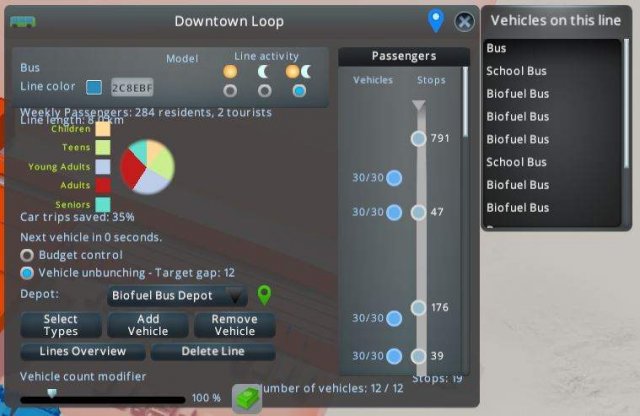 Utilization must be calculated manually. Just take the actual number of passengers divided by the number of vehicles times Passenger Capacity to determine utlization:

At each transportation stop, some passengers get on and others get off.

Each time a customer gets on, they pay the fare. Obviously, they do not pay when they get off.

Because of this on/off dynamic, it is possible for a vehicle to generate more fare paying passengers during a week than its maximum capacity value would suggest. 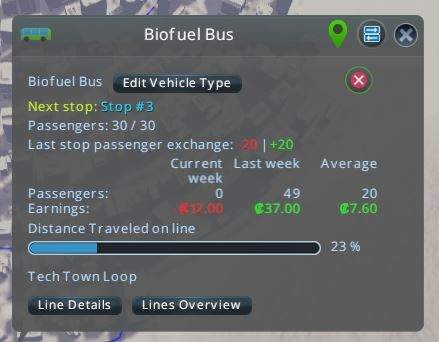 The vehicle detail (click on the vehicle itself to see) shows the number of passengers who board and pay the fare for the current week, the last week and the average since the vehicle when into operation. The current week counter resets every week (of course), on Friday morning (in case you’re interested to know).

Obviously, game time and the visual representations of time are not quite aligned. A day goes by in several seconds (depending on game speed) while a vehicle on the screen progresses only a few city blocks during that ‘day’. Reality and fun game play are not 100% compatible. 🙂

The point is, the counter resets each week regardless of where the vehicle is along its route. The vehicle may make more or fewer stops with more or fewer fare paying passengers in a given week before being reset. Therefore, revenue each week may vary to some degree.

This guide baselines at 100% utilization. Your implementation decisions should allow for the high probability that your lines will not operate at that level and that regularly exceeding 100% is unlikely.

In order to break even at Variable Profit, your buses must average 40% utilization (12 passengers at 1 credit each minus 12 credit vehicle cost equals zero).

In order to break even, a minimum of 40 buses OPERATING AT CAPACITY must be in service (40 buses time 18 variable profit equals 720 which is equal to the fixed costs of bus depot).

BioFuel buses cost the same to operate and generate the same per passenger revenue. However, the BioFuel bus depot has a Fixed Cost of 960 credits which means you need a minimum of 54 buses operating at capacity to break even. The game requires that you have either the conventional OR BioFuel bus depot in order to establish bus lines. After that, you may add up to 100,000 buses as you wish without any additional fixed costs.

Other facilities are optional. The Bus Terminal may be helpful to organize your bus lines, but it is an expensive facility costing 1,200 credits a week to operate. That means that you would need an additional 67 buses operating at full capacity to offset this fixed cost.

We will see in the next sections that Metro Tunnels and Train Tracks generate on-going fixed costs which will also have to be taken into consideration. Buses are not charged for the costs of the roads that they travel on. Those costs are included in the roads budget and are borne by the general public. This is true even of roads that are dedicated to buses or have lanes dedicated to buses. You will see that Right of Way Costs are a key element of planning other modes of transportation.

In order to break even at Variable Profit, your metros must average 20% utilization (30 passengers at 2 credit each minus 60 credit vehicle cost equals zero).

The minimum Fixed Cost is 480 (two stations, NO tunnels). Of course, you will need some tunnels to connect the stations. If, for example, we have 100 units of tunnel, then the fixed cost is 64 for the tunnels plus 480 for the stations for a total of 544. Two trains at capacity would more than cover the fixed costs.

Extending our previous example, two trains at capacity generate 600 credits of margin, two stations cost 480 which leaves 120 credits for track. At 0.64 credits per unit, that’s 187.5 (188) units of track to break even.

As a general guide, if you have more trains that stations, then you can have a pretty sizable tunnel system and still be close to break even.

In my limited game experience, my metros have been the only one of my transportation modes to get even close to generating a profit.

Metro appears to be the most economical means of transport with a high variable margin and potentially low fixed costs. Metro stations are inexpensive (240) compared to Train stations (960). You’ll see the difference in the next section.

In order to break even at Variable Profit, your trains must average 21% utilization (50 passengers at 2 credit each minus 100 credit vehicle cost equals zero).

The minimum fixed cost is 1,920 (two stations, no tracks). Of course, you will need some tracks to connect the stations. If, for example, we have 100 units of track, then the fixed cost is 96 for the tunnels plus 1,920 for the stations for a total of 2,016 credits. It will take at least 5 trains to break even and running 5 trains over that relatively short distance will likely create rail traffic problems.

The track distance matrix for trains is ugly:

Suffice to say that it is unlikely you will ever run trains within your city that will pay for themselves.

In CIties Skyline there are many reasons to implement public transportation that are not related to their costs or ability to pay for themselves. But regardless of the strategic reasons, I recommend that you keep the economics of the various modes in mind and decide if the benefits outweigh the costs of implementing.

This guide explains how to make good (if not ridiculous piles of) money using the Parklife DLC. Thought others might benefit from this information if they want to be push […]

Cities: Skylines – Tips and Tricks for Getting Started

Before you Play the Cities: Skylines game, you will definitely want to know these simple but useful tips and tricks. If you have any tips feel free to share with […]

Without mods, once you have the ability to build incenerator plants and crematoriums you may find yourself wanting to get rid of the landfills and graveyards you have been using […]