Kamaitachi is a Boss and Enemy in Nioh 2. Kamaitachi is a Weasel Yokai that attacks with his claws and tail and is found in The Mysterious One Night Castle Mission.

A Kamaitachi is said to ride the wind, slashing at its victims with biting gales. Folktales about a yokai shrouded in wind are rife throughout Japan, with some regions using the word “Kamaitachi” to refer to whirlwinds themselves. In the Shikoku region, Kamaitachi is known as Nogama (“wild sickle” in Japanese) due to a belief that a sickle abandoned after clearing the grass for a grave will eventually turn into this yokai. 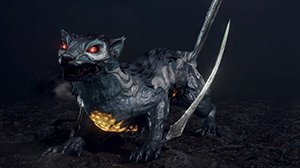 Many victims of Kamaitachi take a while to realize they have been attacked, as the wounds these yokai leave do no initially hurt or bleed. There are multiple theories for why this may be. In the Tokai region, people say that Kamaitachi sucks the blood of their victims even as they attack, leaving no blood to escape from the wounds. In the Hida region, it is believed to be three gods acting as one – the first knocks you over, the second slices you up, and the third applies a salve to stop you form bleeding.

Kamaitachi are said to move as swiftly as the wind. In the event, one must battle a Kamaitachi, predicting its next movement will be vital to increasing one’s chance of survival. Its most vulnerable point is its naked abdomen, though this is difficult to target as the yokai is often on all fours. Watch your opponent closely to find the most opportune moment to strike.

How to Beat Kamaitachi

The strategy to beat this fight is a mix of blocking and dodging. Use a long reaching weapon like a Spear or Odachi, because he tends to leap away from you and staying near him is quite difficult.

When the fight starts you want to head towards him and be ready to block anything he throws your way. He can shoot projectiles or spin at you, often going through trees, so you’ll want to be ready to Block these. It will drain most or all of your Ki, but it will prevent you from taking damage, and Kamaitachi doesn’t usually attack quickly enough to hit you while you recover.

Opening to attack him are after his spin move, if he ends up near you when it finishes, or after his 2 swipe then tail whip combo. If you dodge forward through the tail whip, and block the swipes you can get a few hits in. There are really few openings, so be patient and look for them.

When he rages and starts summoning copies of himself you will have even further reduced Ki Recovery, so you want to “outlast” this phase by using trees for cover and blocking a lot. However, you can get in a good amount of damage when he is changing into this phase, so be sure to hit him several times when he comes both in and out of the phase change. Regardless, your primary objective in this phase is just staying alive. You should only need to do this twice before you can kill him.