Mezuki is a Boss and Enemy in Nioh 2.

A Mezuki is a demon with the head of a horse. It can be seen in various picture scrolls depicting images of hell, torturing the wicked alongside the bull-headed demon Gozuki. However, its appearances in legend have also placed it outside of its underworld domain. Most notably, it is one of the demons on parade in the famous Hyakki Yagyo (“Night Parade of a Hundred Demons”) that is written about in the Uji Shui Monogatari of the early 13th century. 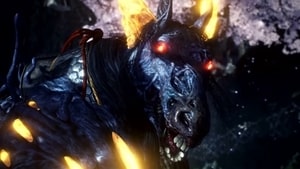 One theory postulates that Mezuki came to be when a large number of humans and horses met their deaths, their grudges and hatred intermingling until finally taking form as the horse-headed demon. After slaughtering victims in droves to rid itself of its lingering resentment, Mezuki finally fell down into hell. It was sentenced by Emma, the judge of the underworld, to work there for as long as it took to make up for the lives it had brutally taken.

Mezuki battlefield is big and open providing a lot of space to dodge his attacks and stay at a safe distance. His attacks are very predictable but they deal a lot of damage, so try to time your dodges and you’ll have no problem beating him. You can burst counter his main attacks dealing high ki Damage.

If you are having trouble with his horizontal swipes, you can back two times and wait for him to finish his combo.

If you want to play it really safe, you can stay at a distance and just wait for his charge attack. When he is charging at you, perform a burst counter, deal some damage and retreat. Repeat until you defeat him.

When in the Dark Realm he will be faster and summon more ghosts. He will also obtain a new attack where he slices the ground sending two powerful ranged attacks.