Shibata Katsuie is a Boss and Enemy in Nioh 2.

How to Beat Shibata Katsuie

Shibata Katsuie can be found in a small square battlefield. Most of the fight he will be rushing at you from wall to wall. 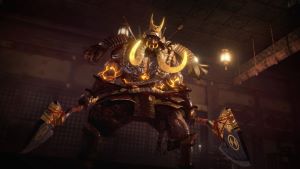 Try to stay in the middle of the room and avoid his charge attacks. He will usually recover after finishing one of his moves so use the opportunity to strike back.

Using Firestop Talismans and Fire Resistance equipment can be a good idea to increase your durability.

While in the Dark Realm all his attacks will be imbued with fire. He will also gain a new charge using his weapons to move around the battlefield and leaving a trail of fire behind.