General layout of the game, how to get started. Nothing in depth.

Days tick by in SECONDS, even when viewing some of the sub-screens of the Lodus, Use the spacebar to pause the game! Hit the SPACE BAR the moment the game starts, explore your options, optimize your fighters, then unpause.

Your fighters will starve to death or die of thirst unless you use the town to buy resources. The town is represented by the (easily missed) table on the right side of the Lodus. Food, wine and water are generally pretty cheap, you should buy them each day to prevent ever running out. 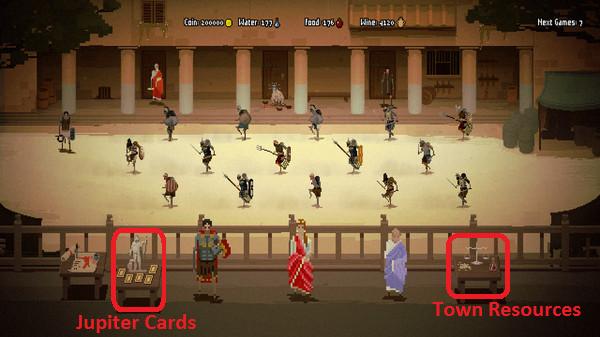 The town is also where you hire assistants, of which you can have three. If you fire a assistant, you will lose all their progress. Especially never fire your Doctore as he is the main trainer for your fighters and has the most developed skill tree. One other thing about assistants, watch for ‘auto’ boxes, such as ‘auto heal’ and ‘auto-assign training’.
Once the game is on pause (spacebar), you can prioritize the training of your fighters.

The town is also where you hire assistants, of which you can have three. If you fire a assistant, you will lose all their progress. Especially never fire your Doctore as he is the main trainer for your fighters and has the most developed skill tree. One other thing about assistants, watch for ‘auto’ boxes, such as ‘auto heal’ and ‘auto-assign training’. Generally, you will want those all checked to on (green). 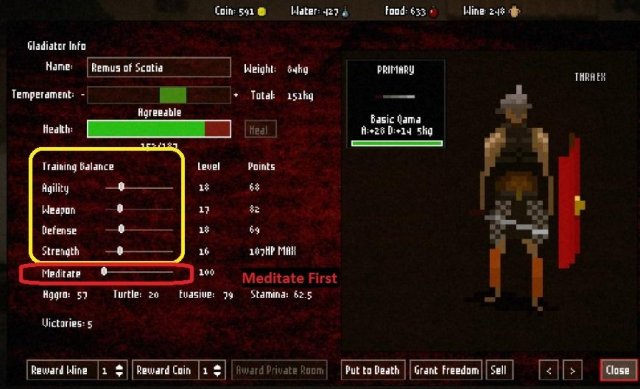 Two Most important Considerations for Training:

Until Meditation is rated as 100 (and it climbs quickly thru training) the AI for that fighter will be pretty dumb. You can research the ability to control ONE of your fighters, but in general, you will want them all to be at 100 by meditating so that they can survive on their own. There are plenty of group battles!

Once Meditation is at 100 (it caps at 100), you can prioritize your fighter’s training however you wish.

Generally Strength (HP&Dmg), Agility (movement) and Weapon (DMG) are more important as a training priority than Defense. Damage scales quickly, so focusing on attack is better, and a surviving fighter levels up in all four, so they will eventually gain defense skill. Check the stats of your fighters every few days and move the sliders around when you want them to change focus.

Slaves purchased from the two dealers often start with much better stats that slaves you win in the arena. Again, train their minds as a priority or they will die easily.

Fighters gain stats fastest by winning fights in the arena (or pitfighting in the town). You will want to spread out your fighting across several fighters: they are all slaves and may try to escape or get killed by a lucky opponent. It is better to have a few strong fighters and several decent fighters than just one superfighter (more on this later).

In this same view you can upgrade the fighters equipment, reward them, free them etc. Important tip, the competition will match your strongest fighter, so dont go crazy spending lots on armor at the begining. Any equipment a fighter wears is lost with them, so spread your gold around. However, purchasing a stronger weapon is a good idea, the competition generally stick with weaker weapons for a while and this can give you a needed advantage.

The Jupiter blessing cards are very useful, and many opponents have them. Over time you will figure out what most of them do, I will focus on which ones help out the most at startup. There are other guides on how to aquire them.

Solid. Buy better equipment for a fighter you are developing. If they die you have your money returned to you. If they suceed, you will have won back your investment and can start training another fighter.

These speed up training time. You can stack multiple on a fighter for even faster training.

You start with mostly shield fighters, defending and then attacking is a good strategy. Riposte makes your fighter much stronger on the counter attack.

Fighters are killed easily at the begining. Losing a few fighters is no reason to start the game over, in fact it is part of the strategy.

When you lose in the arena, you opponents begin to under-estimate you and the challenge of the game decreases. It is sometimes to your advantage to send extra, poorly trained fighters to their death and reduce the difficulty level than try to survive against much stronger fights.

Do not be afraid to turn down a fight you cannot win or is too risky.

Occasionally you will have a lucky and talented fighter in your Lodus who wins fight after fight. The stats of this fighter will quickly outpace the rest of your slaves, and you will find yourself relying on them more and more. These Super-Fighters can become so powerful, they disrupt the balance of the game, able to win a 5 vs 5 arena fight by themselves. Critical to remember, these are all slaves, they may try to escape or die at any time, so spread the fights across your whole lodus. A super-fighter is fun, until they are no longer with you and you are unable to fight the sort of challenges they have unlocked by their win-streak.

If you find the competition too powerful, send a few unarmed slaves into the arena, the game will reduce the difficulty after the slaughter.

This guide will show you the fastest way to get the King of the Jungle achievement. Event Skip One important note is that you must have atleast a few open […]

There are many ways to win, so I’m listing different strategies for beating this game. Macro Murder Meat Strategy Macro Meat Origin of idea: The idea came when I realized […]