Despite the major changes to gameplay focus and the huge increase in the importance of food in ECO 9.0 with crafting requiring calories in labor, the role of the farmer has often been underplayed as a backward, static character who only has one function: To provide “food” for the community. This guide aims to investigate and illuminate the opportunities and true duties of the farming profession, and hopefully provide more fun and collaboration to the ECO communities at large, expanding farming from its traditional role of community sustenance, into one of productivity and quality of living for all.

The usual misconceptions of farming and high collaboration

Shennong, the Divine Farmer wonders why you have such a narrow perception of his job.

In a collaborative game of ECO, there is no greater glory than be the electrical engineer — the savior of the world, by building the laser and all its accoutrements, and then shooting down the meteor with it. Or, be part of the team of hardened dwarves who dug the rock beneath, which became the homes, roads, and metal that form the physical shapes of society. Even the chef, with its gleaming stoves and steaming ovens was a testament to technology mastering over the biological matter gathered from the world.

Agriculture is one of the key technologies that led to human sedentary living, next to the discovery of fire, which not only led to the fundamental natural science discoveries of biology and chemistry, but also the social technology of specialization and hierarchy. The idea of rulership, specialization of tasks and skills all came from the monumental project of planning, plotting, measuring, and running the task of growing the crop that will sustain enough food for all around the year, and then some more.

And that “some more” is what we will discuss in ECO terms today. 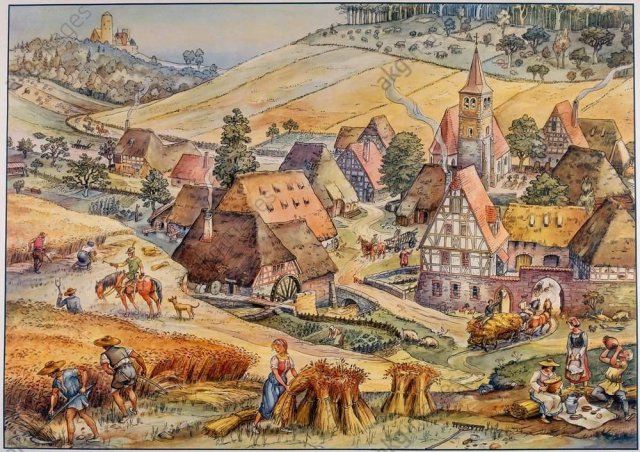 ECO is a game that speaks of its “difficulty” in terms of limiting the functions of an individual from doing various tasks: The higher the supposed difficulty, the less professions or skills one can acquire over the course of a specific period of time. However, the game specifically uses the term “collaboration” rather than “difficulty” levels precisely of this difference: To many players, limiting the amount of skills and attributes one can acquire is a hindrance, but the game tries to convince otherwise: To specialize is to empower one to making a greater whole. Because one only has to do one job, they can spend more time dedicated to it, rather than have to take care of other things, and be distracted with worry and time going from one job to the next. Also, because one produces in anticipation of others’ needs where one never really knows what tomorrow would bring, the excess over time raises that level of expectation, so collectively we build bigger and greater things.

The Scales of Farming in ECO 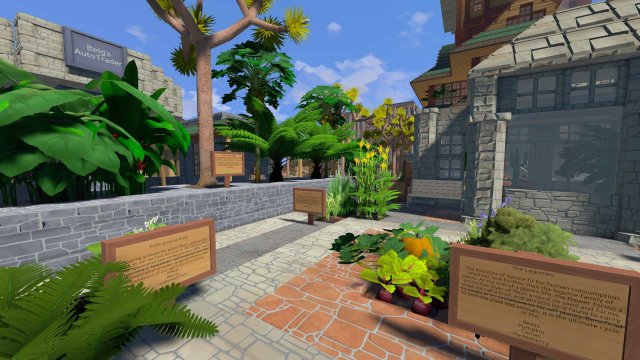 Up to ECO 8.3, the player community still largely clings to a general concept of farming as part of the “food industry,” where foodstuffs (raw foods) are gathered and are then finally processed by a chef to be consumed (alternatively, are processed individually by the end user with basic charring methods at a campfire). In this model, plants are being gathered for the sole purpose of sustenance at the basic level – usually for the caloric values to perform work. 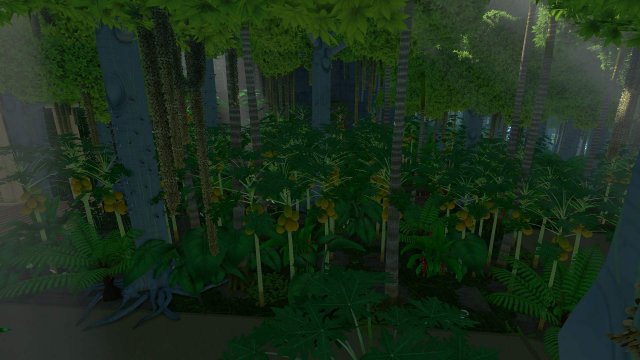 In this model, foodstuffs (NOT food) are perceived to be a 1:1 ratio for consumption, as in all crops produced here are for the sole purpose of (almost) direct consumption, without secondary processing such as milling into secondary products such as flour, sugar, or oil. Such practices are seen as excess, as such processing requires the time, scale, and effort beyond the individual’s ability or focus. Production scale here often is in the tens or hundreds, most of which will be bush-type crops that do not require replanting. 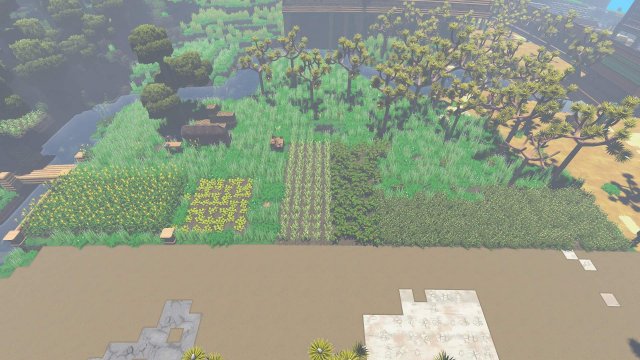 As soon as iron becomes available in the community, the agricultural community should invest in having individual or shared hand ploughs (made by the basic engineer) immediately, as hoeing by hand is labor and time costly. With time and dedication, farmers should already have a sufficiently large farm by the time the steam tractor is available, and primarily use that for planting and harvesting, rather than expanding its fields with it.

After the farmer achieves seed security and has enough to ensure a steady growth in production area and size, the next step would be to set up a constant supply of foodstuffs for the general public and the chef to procure, and begin to have an excess supply to create secondary products through milling — flour, a bit of sugar, and most importantly, oil.

Similar to tallow by the hunter profession, oil can be used for both cooking and fuel, and in most cases when underproduction is the case, the community cannot afford to spare this precious resource to fill their lamps and preferring its use to food instead.

Little do many who pursue the track of agriculture know, this is where the real money-maker of the profession is — food consumption is dependent on player activity and highly subjective factors, but fuel is an ever-expanding constant: Every additional lamp in the city is another 200 units of oil to fill up with every nine-and-a-half days. If every player has a house with 5 rooms and each has one light source, having even half of that in form of oil lamps would be a mind-boggling potential market of about 5,000 oil per week to tap into for a server of about 12 players — and that’s just the privately-owned buildings! 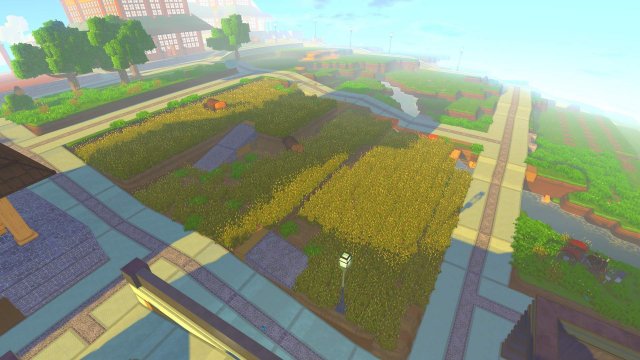 Depending on the conditions and mods on your server, oil-generating crops may differ. In most vanilla servers, oil is a byproduct of flour production in cereal germs, while for some others, common seeds easily found in overabundance (such as tomato or huckleberry seeds, sometimes even tree seeds) may have modded recipes to also extract into oil via a mill.

Another crop to look out for beginning in 8.3 is the sunflower, a plant that generates plant fiber, as well as an abundance of seeds. This plant’s primary crop are the seeds itself, and while plant fiber is valued by the tailor for cloth and by the mason for mortar, the quickly multiplying supply of seeds means it is cultivated for the sole purpose of oil production. This may be the cash crop of the future, keep an eye out.

Plant fiber is an often overlooked cash crop for the farmer and farmhand to gather. At the moment, big bluestems are the most efficient and bountiful crop for this abundant but important resource. As 9.0 will introduce labor costs with just about every processing task, crushing sandstone for sand to process into mortar will undoubtedly be difficult for the mason — and sandstone is a finite resource, unlike the biological options of wood pulp and plant fiber. Similarly, it is used by carpenters for simple furniture, as well as the tailor for cloth, so pastures or natural meadows should be preserved (or even cultivated) for dedicated farmhands to collect regularly. 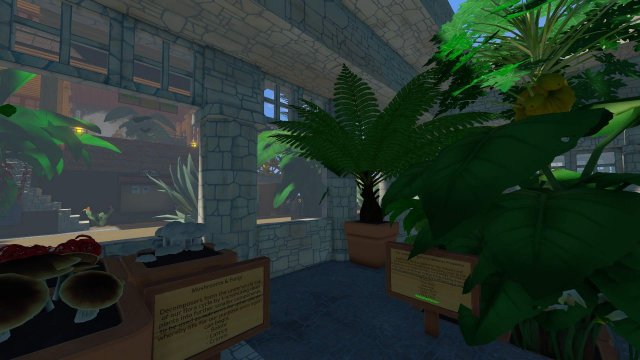 Also, as a diverse range of flora is introduced in 8.0, seed collecting while plant fiber gathering has become trendy, as various plants that generate generic plant fiber also generates seeds of its original plant. These seeds of exotic flowers and bushes are in high demand by the aesthetically-oriented dwellers in cities to put in their household or garden flowerpots. Farmers and farmhands should capitalize on this and sell them at prestige prices.

Farmer and Farmhand: Division of Tasks in a High-Collaboration Setup 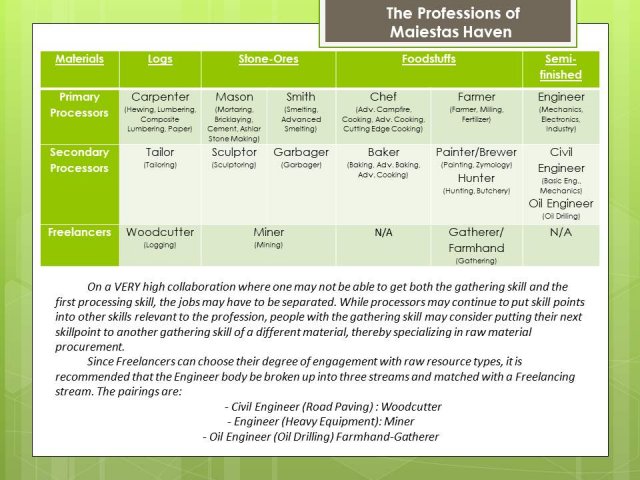 In a high or very high collaboration setup where players start off with only 1 specialization or star (or even if it is not), a city’s food supply should be handled by at least 4 separate people: The chef, the hunter, the farmer, and the farmhand. While the first two are self-explanatory, the latter two shows the sheer scale of what planting and harvesting crops entails.

Similar to the woodcutter to the carpenter, and the miner to the mason or smith, the gatherer (or more aptly, the farmhand) is specialized in the gathering skill from start, and is dedicated to the harvesting phase. Collecting and spending the seeds s/he collects back into the fields, farmhands focus on getting the harvested resources distributed into the city – perhaps towards everyone at first, but should very quickly adapt to supplying mostly to the chef and the farmer, who will process half the crops into useful products for other professions and the general public for consumption. 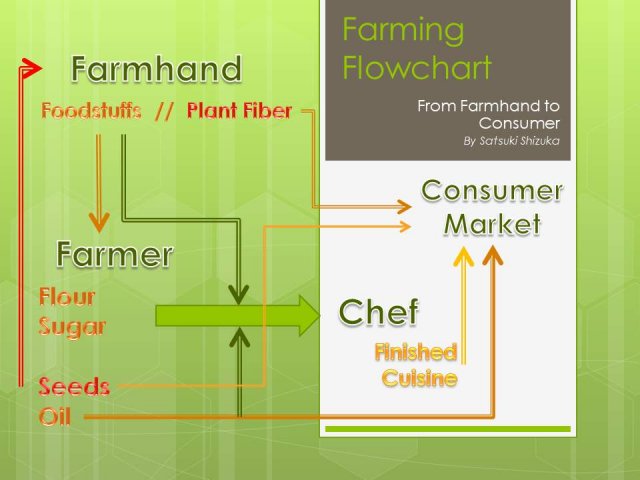 The farmhand will produce 3 major types of products: Foodstuffs (crops), plant fiber, and seeds. While plant fiber is sold to the general market (usually mason and tailor), foodstuffs are sold primarily to chefs and farmers, who will process them into foods or secondary foodstuff products. While seeds for crops can be reused, selling crops to the farmer also means utilizing the farming skill to make even more seeds and bolster the growing scale into a much larger operation.

The role of the farmer will hence be much more of a business management situation: The well-run farmer’s shop will not only sell processed goods such as flour and oil, but also resell excess foodstuffs and seeds back to the farmhand. A responsible farmer should buy all kinds of crops from the farmhand at fair prices so that finished products are worth only 20~30% more than its required materials cost, as well as a generous supply of extra seeds for the farmhand, as well as the occasional curious gardener or eclectic interior designer to furnish their planter pots and home vegetable gardens.

Asides from duty in store, it is likely that the farmer will have to also help out in planting the fields, perhaps in the end blurring the lines between farmer and farmhand. 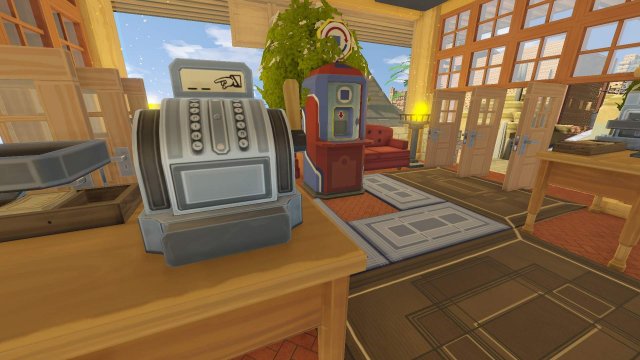 A successful farmer should be able to make and sustain the livelihoods of many gatherers and farmhands, and feed a society with an expanding hunger for both food and energy needs. A successful agrarian society should have bellies full of nutritious food, and their houses burn bright with the long-lasting light of vegetable oil. With this accumulated wealth, the farmer (or more likely, the farmhand) could invest with his or her excess capital and skill points in purchasing the equipment and skill the continuing legacy of energy supply in the modern age — in the new ventures of the oil drilling engineer.

A glorious and rich legacy awaits you, O humble farmer – are you ready, for the future is energy?

Learn how to create a megafactory, with step-by-step instructions… I have created this guide because i construct this factory often and find it very useful, and thought it would be […]